The Brumbies returned to winning ways in Super Rugby when they beat the Sharks 24-17 in a hard-fought encounter in Canberra on Saturday.

Both sides scored two tries apiece and although the win was a deserved one for the home side, they will be disappointed with their discipline as both Lachlan McCaffrey and Allan Alaalatoa spent time in the sin bin for defensive indiscretions.

The result means the Brumbies are now in joint second place on the Australian Conference table although that situation could change depending on the performances of the other Australian sides later in the round.

Meanwhile, the Sharks are still in second spot in the South African Conference but they could drop to third place if the Stormers beat the Blues on Saturday.

The opening exchanges were evenly contested but the Brumbies took the lead in the seventh minute via a Wharenui Hawera penalty after the Sharks were blown up for illegal scrummaging.

The home side continued to attack and after an extended period camped inside the Sharks' 22, Andrew Muirhead offloaded to Lausii Taliauli, who crossed for the opening try which Hawera converted.

The Sharks were slowly getting into the game and evenually opened their account in on the half-hour mark courtesy of a Robert du Preez penalty after the Brumbies strayed offside on defence.

The rest of the half was a dour affair characterised by several unforced errors and poor discipline from both sides. And after warnings to both teams for repeated infringements, the Brumbies were reduced to 14 men in the 36th minute when McCaffrey was yellow carded for an indiscretion on defence.

The Sharks did not score any points during McCaffrey's spell off the field which meant the Brumbies led 10-3 as the teams changed sides at half-time.

The home side were fastest out of the blocks after the restart and shortly after re-entering the playing field McCaffrey found himself in space in the Sharks' 22 before throwing an inside pass to Henry Speight, who crossed for his side's second try.

Hawera missed with his conversion attempt and five minutes later, Alaalatoa received his marching orders when he entered a maul from the side close to his try-line.

Shortly afterwards, the Sharks made full use of their numerical advantage when Thomas du Toit barged over from close quarters for their opening try and Du Preez's conversion meant the match was evenly poised with the Brumbies leading 15-10.

The Sharks' discipline let them down badly, however, and Hawera added three unanswered penalties during a 10-minute period which meant the Brumbies led 24-10 by the 72nd minute.

The vistors did not surrender though and a Curwin Bosch try in the 77th minute set up a tense finish but the hosts did well to hold on for the win. 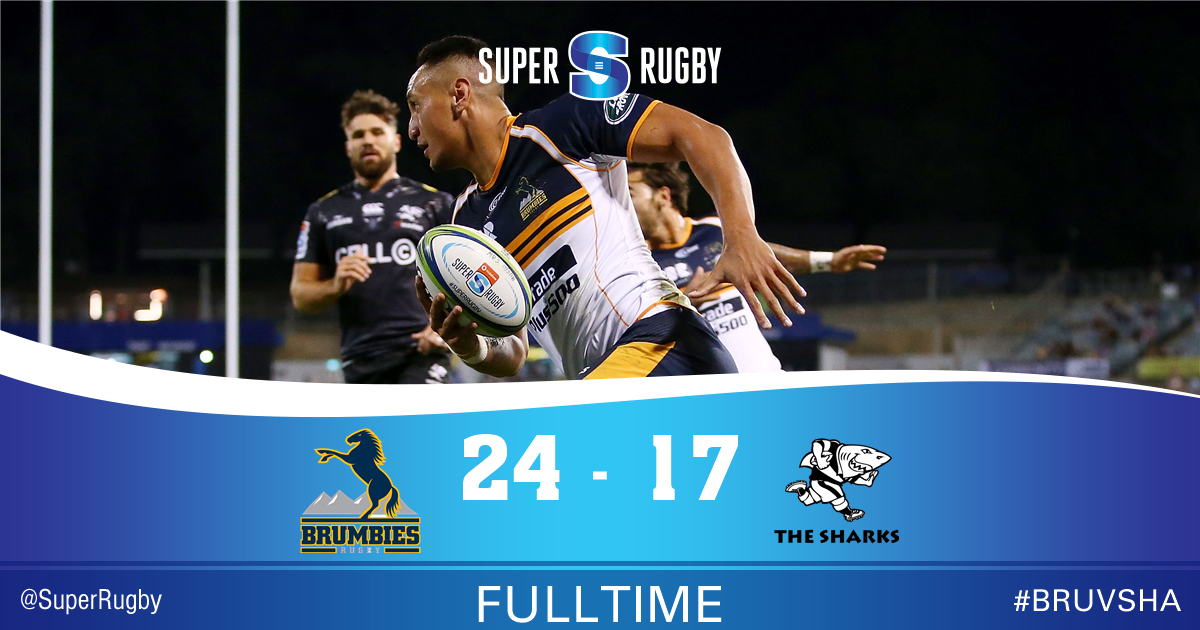