The Brumbies were pushed to their limits at the SCG on Friday as they edged out the Waratahs 24-22 in a hard-fought battle.

The visiting team stamped their authority on the game in the fourth minute as Tom Banks scored the opening try. The fullback joined the backline from a quick lineout and showcased his quick feet by beating Alex Newsome, Izaia Perese, Jack Maddocks, and James Ramm on his way to scoring the try. Noah Lolesio saw his conversion attempt fade and go just wide of the uprights.

The Brumbies' confidence surged after taking the early lead and they made the most of the momentum to score a second try in the 14th minute. Tom Wright scooped up a bouncing pass and powered his way over the tryline with Maddocks on his back. The conversion was missed again.

The hosts finally scored their first points of the game to reduce the deficit to seven points as Will Harrison put a penalty through the sticks for 3-10.

Not long after breaking their egg, the Waratahs levelled matters at 10-10 thanks to some decisive action from scrumhalf Jake Gordon. He took a quick-tap penalty and was stopped right on the line, but it was recycled and Harry Johnson-Holmes crashed over for the try and Harrison converted.

At the other end of the pitch the Brumbies responded swiftly to score a third try and restore their lead in the 25th minute. A brilliant solo effort saw Andy Muirhead outwit his defenders with slick movement to score the five-pointer before a successful conversion from Lolesio made it 10-17.

Shortly before the interval, the Brumbies were at it again. On this occasion it was a driving maul which set up their fourth try, with hooker Folau Fainga'a crashing over before Lolesio converted for a 10-24 half-time lead.

The away side were on the attack again after the break but the 'Tahs stood their ground with some determined defending and were rewarded for their efforts as Brumbies flank Tom Cusack was shown a yellow card for infringing at the ruck.

Around the hour mark the home side were hammering away at the Brumbies defence in search of pay dirt, and in the 64th minute they broke through with Harrison scoring his team's second try, which he converted to make it 17-24.

The Brumbies were once again reduced to 14 men with the Waratahs on the attack, as substitute Rory Scott was shown a yellow card, but they kept their composure and turned the ball over before clearing their lines.

Incredible late drama at the SCG saw Cusack shown his second yellow card of the game and then a red. The TMO decided he had knocked the ball out of Jake Gordon's hands near the tryline.

The 'Tahs opted to take the scrum from five metres out and James Ramm scored the try in the corner to reduce the gap to only two points, but the conversion was pulled wide by Harrison and the Brumbies held on for a 24-22 victory. 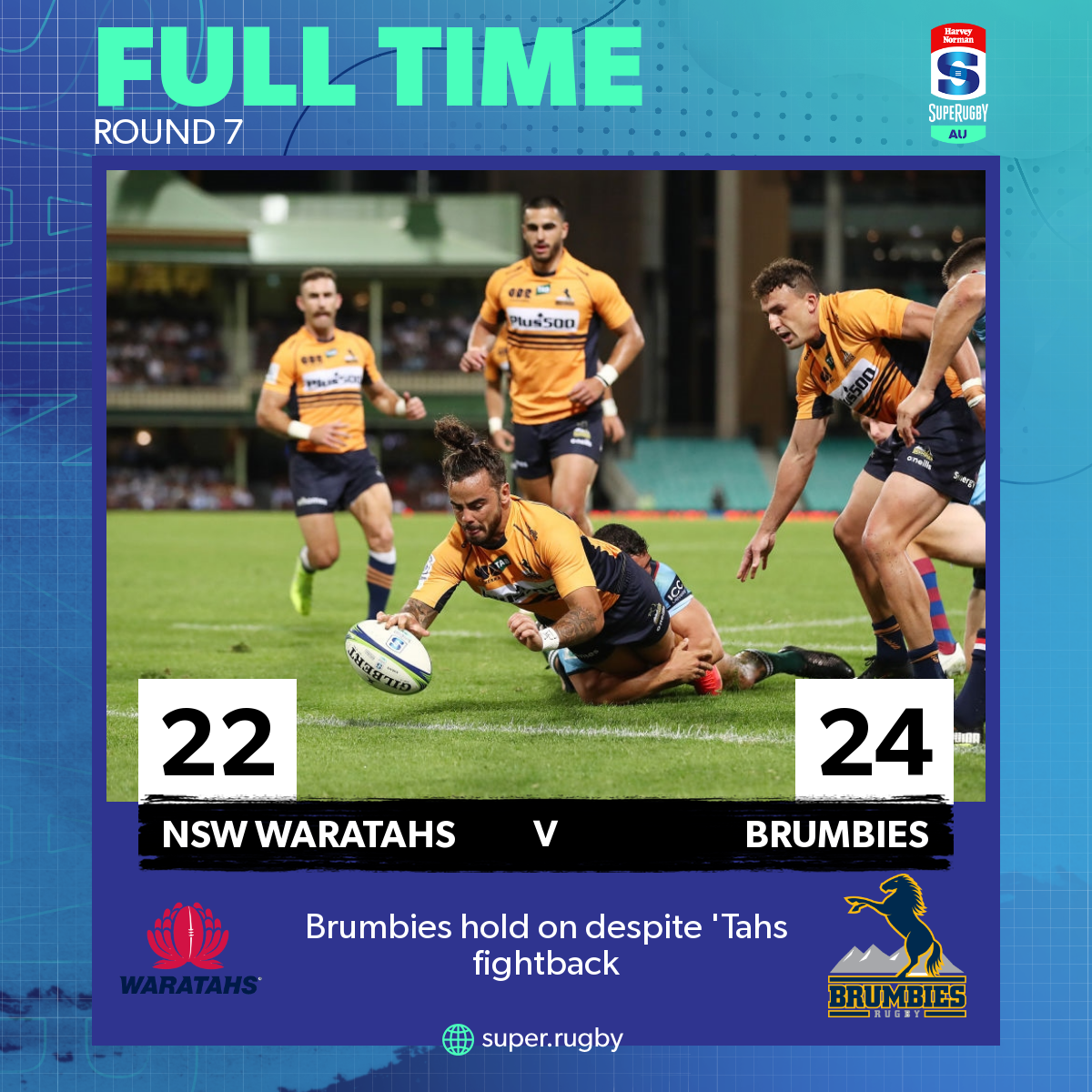