Brumbies Get Bonus Point Against Sunwolves

The Brumbies put on an entertaining attacking display to defeat the Sunwolves 14-47 in their relocated Super Rugby clash in Wollongong.

The Brumbies enjoyed plenty of continuity early on, with the powerful Tevita Kuridrani featuring in a couple good runs to rack up no less than 18 phases to get to the Sunwolves line. But a handling error ended their run in front of the growing crowd at WIN Stadium on the beach.

The Sunwolves were forced to absorb much pressure in the opening minutes and they would eventually crack in the tenth minute. A missed touch finder was collected by the Brumbies and they countered well, with winger Toni Pulu stepping beautifully through a hole, offloading to Rob Valetini and he shovelled the ball on to scrum-half Ryan Lonergan who went over near the poles for the opening score.

It didn't take long for the Brumbies to strike again, with Murray Douglas providing a great inside ball for flanker Will Miller to crash over. Lonergan added the extras to make it 14-0 in the 21st minute.

The Sunwolves finally enjoyed a sustained period on attack but their hands would let them down on two occasions. Centre Ben Te’o would drop a sharp pass a couple metres out from the line to add to their frustrations.

But they were finally able to turn the pressure into points with a textbook lineout drive just before half-time. Scrum-half Rudy Paige was directing traffic at the back and the Sunwolves rumbled over the try line with hooker Efitusi Maafu earning his debut SuperRugby try.

But unfortunately for the Sunwolves, another handling error would prove costly. After spilling the ball in the midfield, the Brumbies countered in the wide channel. Winger JJ Engelbrecht came off his wing to try to snuffle the attack but missed the tackle, leading to flanker Rob Valetini showing good pace to run 30m down the touchline and score the Brumbies’ third try. The teams went back into the shed with the Brumbies 21-7 up.

The hosts enjoyed a bright start to the second half with their driving maul almost getting them five points. They kept their composure and moved the ball to the other end of the park, with Tom Banks stepping and offloading to Irae Simone who found Pulu in space, who rode an excellent tackle from Engelbrecht and was judged to have sneaked over in the corner by the TMO.

Unfortunately, it was more of the same form the Sunwolves as yet another handling error on attack led to potent counter from the Brumbies. Wallaby James slipper enjoyed a storming run and ten phases later they were camped on the Sunwolves line. A short ball from Lonergan saw Tevita Kuridrani crash over from close range.

Minutes later and now in full flow, Banks slipped three tackles in the Sunwolves half, leading to an athletic finish in the corner from winger Solomone Kata. The conversion was missed, but it hardly mattered at 40-7.

The Sunwolves earned a penalty in the midfield and a superb touchfinder gave them a 5m lineout. They would stick to their strengths in the forwards and a couple penalties later, lumbering lock Michael Stolberg would ride a tackle over the line for their second try.

With the clock running down, replacement Brumbies winger Tom Wright had a fantastic 50m run and showed a good turn of pace to get his team deep in the Sunwolves half. A minute later, replacement scrum-half Joe Powell would snipe over the line from centimeters out. Reesjan Pasitoa would kick the final points of the match to cap off a dominating performance from the Brumbies. 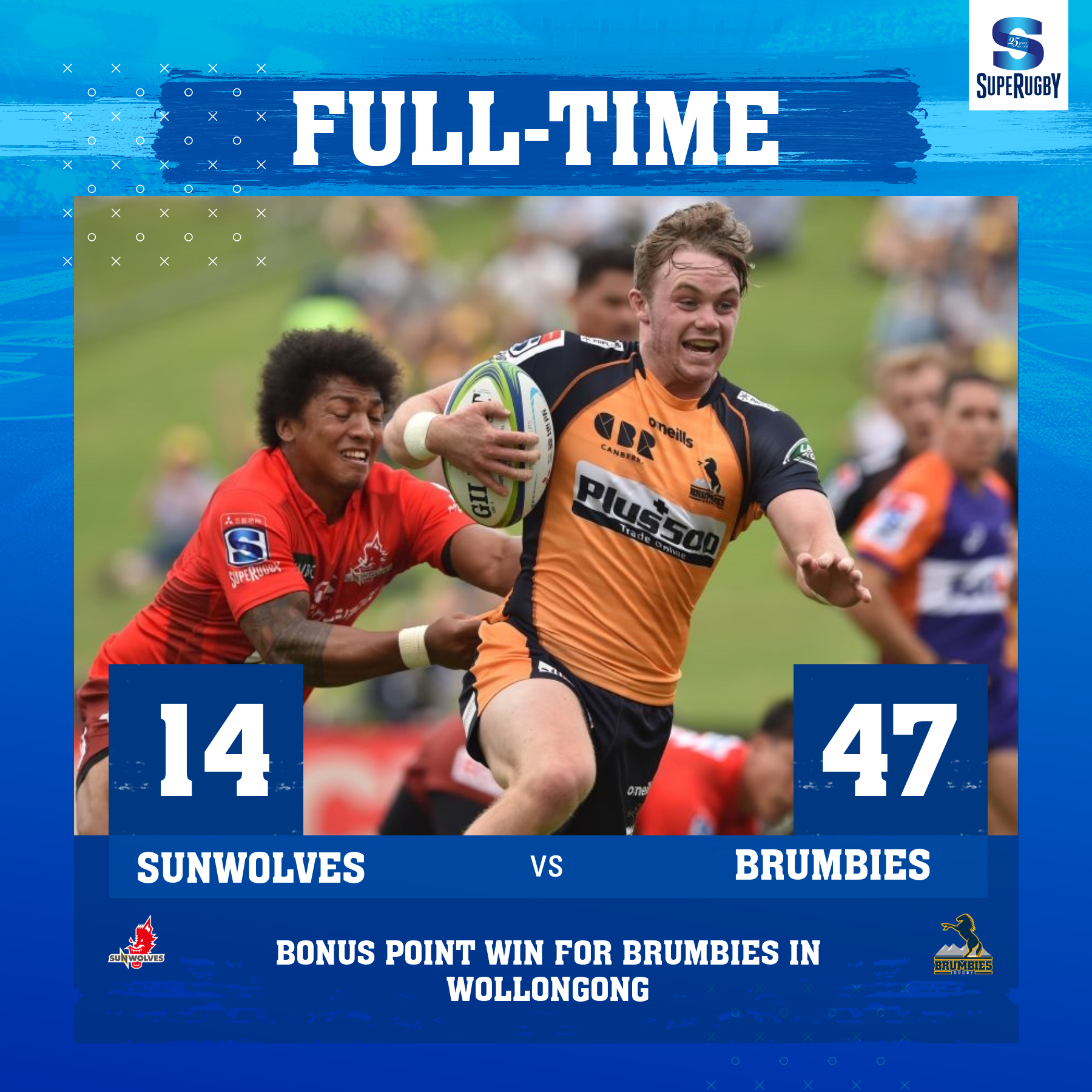