The Brumbies found themselves on the receiving end of an impressive second-half fightback from the Rebels before recovering to secure a 31-23 victory in their Super Rugby AU opener in Canberra.

It was an impressive opening 40 minutes from Dan McKellar’s men, who were enjoying a fine year before the Super Rugby competition was suspended, and three tries via Andy Muirhead, Joe Powell and Folau Fainga’a saw them go into the interval 19-6 in front.

Matt Toomua had kicked two penalties for the visitors but they lacked ideas and the hosts appeared to have secured the victory at the start of the second period when Tom Wright went over for their third try.

However, the Rebels got back into the contest through quick-fire Jordan Uelese and Dane Haylett-Petty efforts. Another Toomua three-pointer reduced the deficit further before Will Miller’s late score secured the win for the Brumbies.

The Canberra outfit were the dominant force in Australia before the Super Rugby season was curtailed, topping their conference with five victories out of six.

Included in that run was a comfortable 39-26 success over the Rebels, which was based on a lightning-quick start. They scored four tries in the first half-hour and the visitors perhaps feared a similar story when the hosts opened the scoring early on.

Just three minutes had elapsed when they earned a lineout 15 metres out from the opposition line. Usually, McKellar’s charges go to their trusty maul but instead, they produced a wrap-around move, which allowed Fainga’a to send Muirhead surging across the whitewash with a no-look pass.

Unlike that encounter from February, however, the Rebels managed to fight back and were aided by the Brumbies' ill-discipline. The hosts continually infringed and Toomua added successive penalties to reduce the arrears to one point.

The Melbourne-based side were also controlling the scrum battle, despite losing a couple of crucial cogs from their pack before the competition, and the two-time Super 12 winners initially struggled for fluency.

Dave Wessels’ side looked more comfortable than they did back in February, but they would soon be back under pressure when the men from the capital went back to their profitable driving game.

They surged towards the line and, although the visitors put in extra players to halt their opponents' progress, they were short of defenders away from the maul and Powell sniped his way over.

Try-scoring machine Fainga’a would follow him soon after and at 19-6 in front the Brumbies had a comfortable buffer going into the second period.

That advantage would be extended four minutes after the interval when Noah Lolesio brilliantly broke through and found Wright, who duly strolled across the whitewash.

Despite containing a talented backline, it had been a pretty abysmal attacking effort from the Rebels, but they did manage to breach the opposition defence by taking heed of the home team’s tactics. Like the Canberra side regularly do, the visitors went to the drive and were rewarded as Uelese touched down.

It was the momentum they needed and a quick-fire second try got them back into the contest. Once again the hard work was done by the forwards, who consistently got on the front foot, and the ball was eventually spread wide for Haylett-Petty to finish.

Toomua’s third penalty added further concern among the hosts’ ranks, leaving it a one-point game going into the latter stages, but Miller’s try three minutes from time, after the Brumbies drove forward from a line-out feed five metres out, made sure of the victory for the home side. 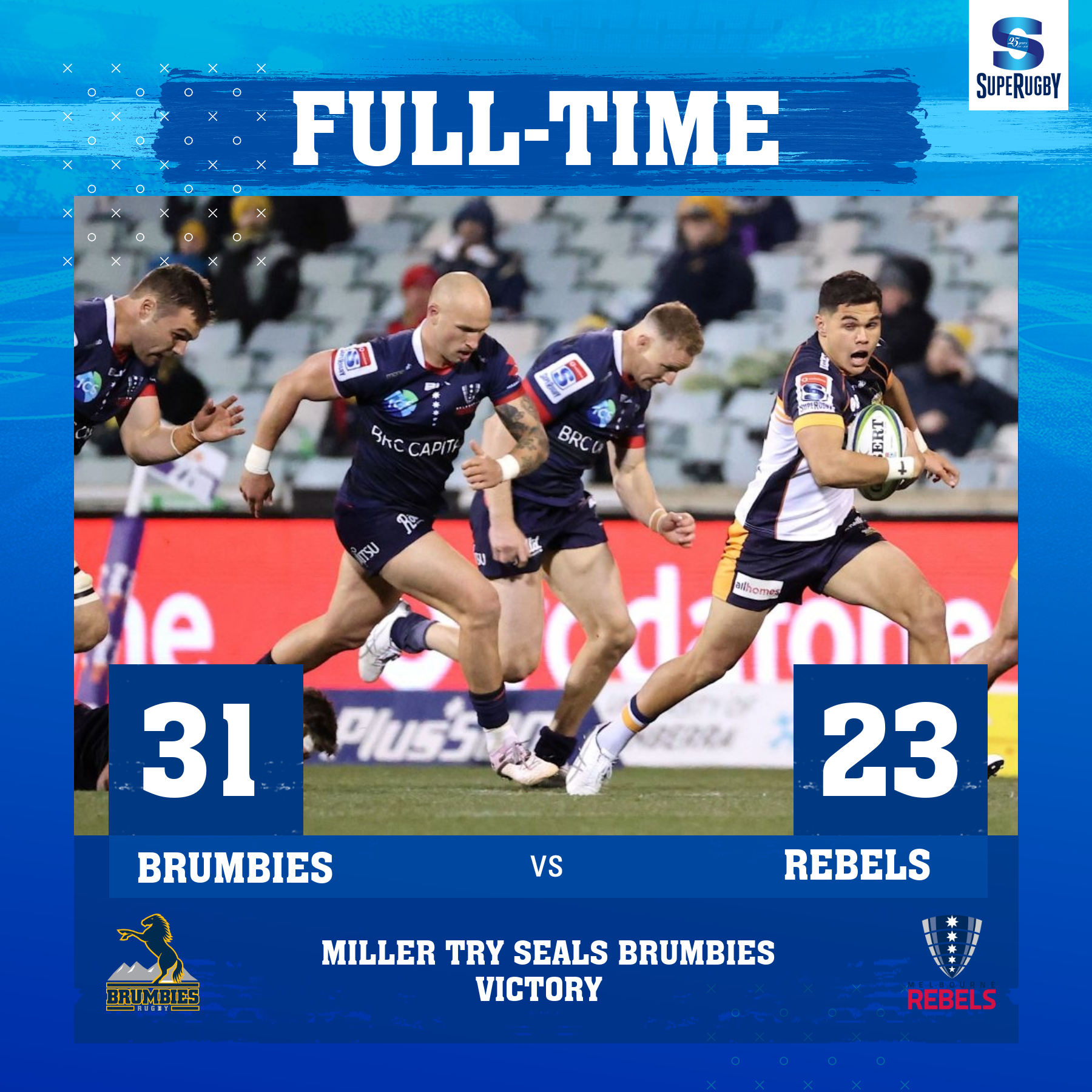