Brumbies hold on to beat Reds in Canberra

The Brumbies overcame a spirited effort from the Reds to kick off their 2020 Super Rugby campaign with a hard-fought 27-24 victory at the GIO Stadium.

The evening started with a moment of silence for the victims of the Australian bushfire crisis, after which referee AJ Jacobs blew his whistle to get the game under way.

The Brumbies nearly took the lead in the second minute after going for the corner instead of opting for the posts following an early penalty, with only some sterling defence from the Reds preventing the score.

Two minutes later, however, they did go in front after opting for the corner again. Alan Ala'atoa showed some great skill to work the ball to centre Irae Simone, who barged over from close quarters before fly-half Noah Lelosio added the extras.

The Brumbies thought they had their second try four minutes later after Tom Wright went on a marauding run, but it was ruled out by the TMO after replays showed the winger had crawled forward in the tackle.

Despite a slow start to the game, the Reds hit back to level the scores on 18 minutes after also turning down an easy three points in favour of an attacking lineout. A brilliant set-piece move saw Isaac Lucas pop the ball to Henry Speight, who dove in under the posts to score his side's first five-pointer. Bryce Hegarty slotted the conversion to tie it up at 7-7.

Seven minutes later, the Reds were in front after overpowering the Brumbies at scrum time, allowing Hegarty to knock over the resulting penalty.

The visitors continued to look much improved and were rewarded with their second try on the stroke of half-time after a period of concerted pressure saw a long pass fired out to Hegarty, who stepped past Brumbies fullback Tom Banks to go over. Hegarty added the extras as well to give the Reds a surprise 17-7 lead at the break.

The second half got off to a scrappy start as the two teams seemed to struggle in the Canberra heat, but the Brumbies were quickest to find their feet.

Wright dotted down for their second try in the 47th minute after some fine work at the breakdown forced the turnover, allowing the ball to go out wide where the winger was waiting to power over the line despite the attention of Lucas. Lelosio couldn't add the extras, however, as the Reds stayed five points in front.

Just over 10 minutes later, the Brumbies drew level with their third try of the night after setting up the driving maul following an attacking lineout five metres out. Hooker Folau Fainga’a crashed over for the score, but Lelosio missed another conversion, leaving the scores tied at 17 apiece.

The hosts had their tails up and soon retook the lead through Banks, who crossed over for their fourth try 14 minutes from time after collecting a great inside pass and running in under the sticks. Lolesio added the extras to hand the Brumbies a seven-point lead.

A penalty kick from Lolesio with four minutes to go seemed to put the game beyond the Reds, but the Queensland outfit hit back with their third try moments later to set up a nerve-wracking finish. James O'Connor was the man who made the line break before Harry Wilson finished the job, as Hegarty kicked the conversion to make it a three-point ballgame.

But that would prove to be the last score of the match as the Brumbies held on for the opening day win, with the Reds settling for a bonus point in defeat. 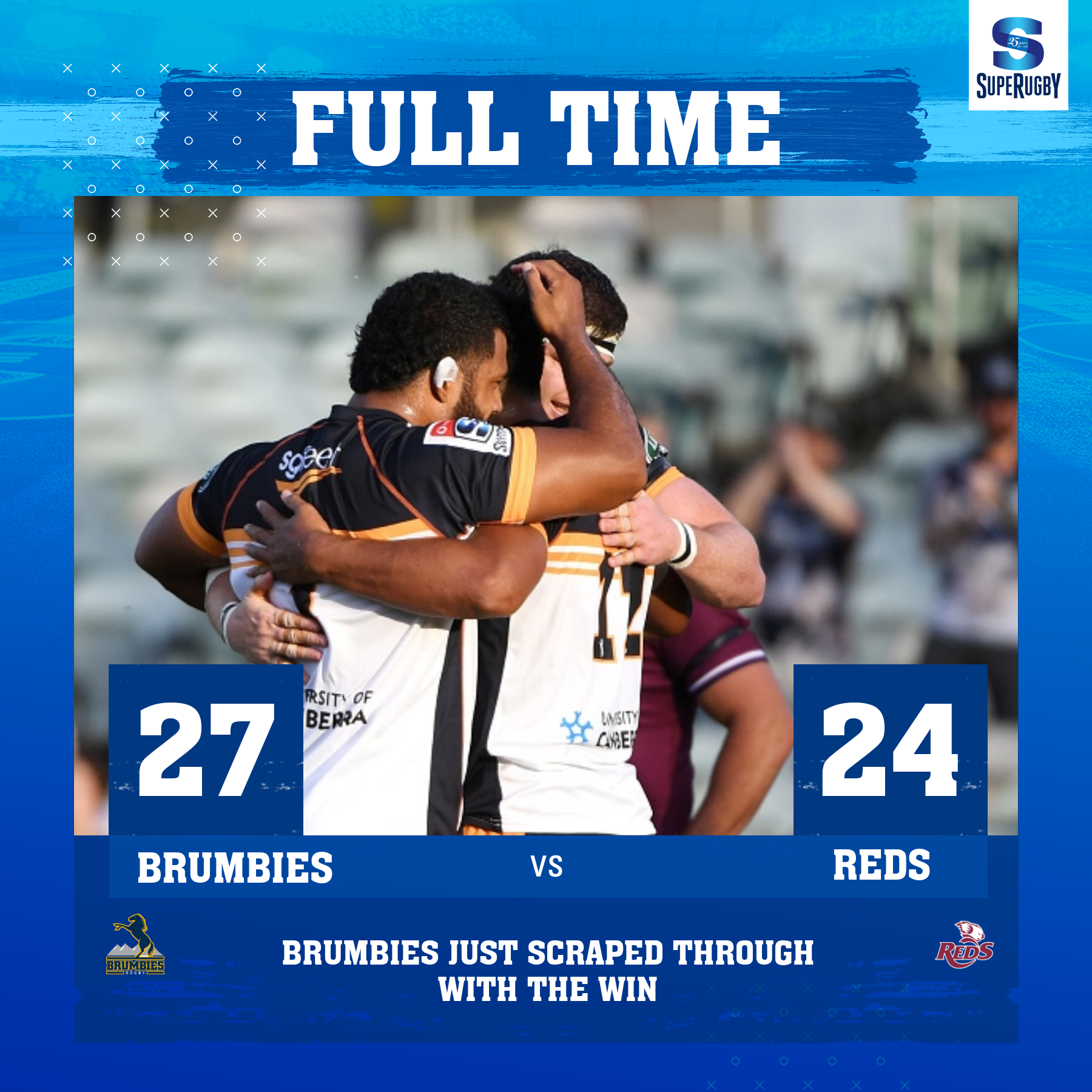