Brumbies hold on to beat Stormers at Newlands

There were just two points in it as the Brumbies held on for a 19-17 victory over a disappointing Stormers outfit at Newlands.

The visitors opened the scoring in just the seventh minute after some enterprising attacking play led to a try for eighth man Pete Samu, who collected the offload from fellow back rower Rory Arnold before powering over in the corner.

The try was not converted, and the Stormers quickly reduced the deficit to just two points via the boot of flyhalf Joshua Stander after they were awarded a penalty in a kickable position.

The Newlands faithful barely had a chance to wipe their eyes out before the Brumbies were in under the sticks again.

Arnold was in the thick of the action once more, charging down a box kick from scrumhalf Herschel Jantjies before bending low to gather the ball and running in unopposed to give the Brumbies a shock 10-3 lead that soon became 12 as flyhalf Christian Lealiifano added the extras.

The Stormers thought they had hit back 10 minutes before the break, but Salmaan Moerat had his first Super Rugby try chalked off by the TMO after Wilco Louw was adjudged to have knocked on in the build up.

The first half ended in extraordinary fashion with the half-time whistle being overturned after a surging run by Jantjies was illegally ended by a high tackle from Toni Pulu.

The infringement was only spotted once the referee Nick Briant had already blown for half-time, and with most of the Brumbies already walking off in the tunnel.

The players had to return to the field, however, and after what seemed like an eternity the TMO awarded the Stormers a penalty try, as it finally ended 12-10 to the Brumbies at the break.

The home side took the lead for the first time in the match six minutes into the second half thanks to Wilco Louw. It was a sustained period of pressure following an attacking line-out that finally led to the front-rower crashing over for a well-deserved try, as he made amends for his knock-on in the build-up of the earlier disallowed effort.

But the Stormers fans' joy was short-lived as their side had another try disallowed for a foot in touch before the Brumbies retook the lead shortly before the hour mark with their third five-pointer of the afternoon.

It was a classic backline move, with a focused attack up the middle creating the space out wide, where fullback Tom Banks was waiting to collect a long pass and go over for an easy finish.

Lealiifano added the two extra points to give the Brumbies a 19-17 lead heading into the last quarter, and try as they might, the Stormers could not break down their defence for the remaining 20 minutes.

Stander did have once chance to put them ahead after the Stormers were awarded a penalty, but he could not find the target and the end result was another defeat for Robbie Fleck's side, their fourth in the last five games. 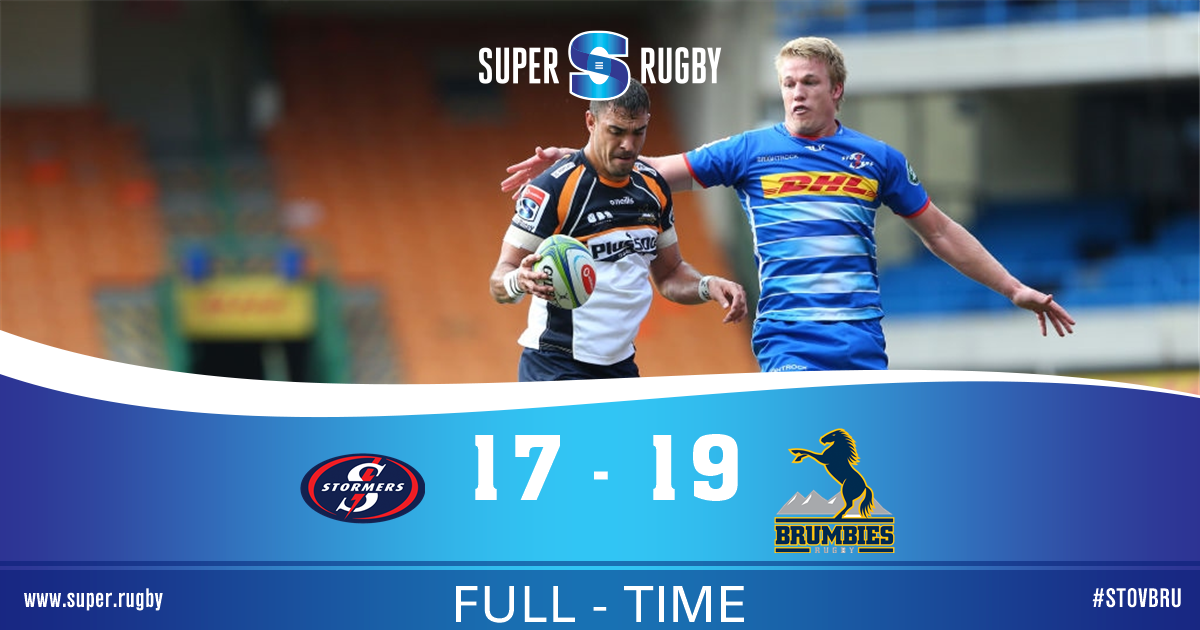