Brumbies on top in Bloem

Three tries enabled the Brumbies to get back to winning ways in Super Rugby, as they triumphed over the Cheetahs 25-18 in Bloemfontein.

Ahead on the scoreboard from start to finish, the Brumbies now head back to Australia with a fourth win of the year under their belt.

Stephen Larkham's side were eager to respond after a poor performance by their standards the previous week in Cape Town and they did more enough here to finish with the win, despite more issues with their discipline.

As a result they move two points behind the Chiefs in second place in the Australasian Group, and four points clear of the Rebels at the top of the Australian Conference.

The Cheetahs enjoyed the upper hand in the scrum but this defeat was their fourth in five matches this season, as a lack of precision cost them when within striking range of the Brumbies line until Sergeal Petersen's late score.

That try sparked them into life in the closing stages but it came too late, a Niel Marais penalty after the hooter however allowing them to take away a losing bonus point.

Tomás Cubelli looked as though he had scored after less than 30 seconds, after Clayton Blommetjies and Marais failed to recover Joe Tomane's kick ahead, but the try was chalked off for a forward pass in the build-up from Scott Fardy.

HIGHLIGHTS: The Brumbies led all day to run out deserved winners, but it wasn't all doom and gloom for the plucky Cheetahs who snatched a losing bonus point in the dying moments.

The visitors didn't have to wait long though for that first try, a David Pocock interception laying the platform for Ita Vaea to power his way over out wide a few phases later. Lealiifano knocked over a penalty not long after to extend the lead to 10-0.

Straying offside meant the Brumbies gave Marais a chance to secure their first points for the Cheetahs through a penalty and the hosts were further rewarded for a long spell in Brumbies' territory with a try.

Uzair Cassiem had too much power for a covering tackle from Sam Carter, the flanker's score making it 8-10.

Enjoying the majority of possession the Brumbies continued to show moments of indecision on attack, but the next try also went their way, after the Cheetahs had lost loosehead prop Ox Nche to the sin-bin for lazy running in defence.

Sending the ball through the hands with a huge overlap, the ball came off lock Rory Arnold's shoulder before Matt Toomua released Aidan Toua to stroll over.

Lealiifano couldn't convert and the score stayed at 8-15 by half-time despite a late surge from the Cheetahs driving maul after the hooter, having marched up the field from successive penalties with Carter seeing yellow, but the hosts were unable to cross the line.

Strong work at the scrum handed the Cheetahs a shot at goal at the start of the second half but Marais didn't have the direction on his effort, keeping the gap at seven points.

Lealiifano on the other hand made no mistake, knocking over three points after the Cheetahs strayed offside, but the fly-half had a scare when Petersen beat him to the ball to hack Boom Prinsloo's kick forward in a race for the line, although the Brumbies escaped with a 22 dropout.

Instead the Brumbies marched upfield and added a third try through Ben Alexander, the veteran crashing over from close range after Allan Alaalatoa's cute offload.

After a number of failed attacks the Cheetahs' back three finally came up with a try, and a fine one at that.

Raymond Rhule's cross-field kick to Blommetjies set the full-back up for a run and he beat the tackle of Tevita Kuridrani, before releasing the rapid Petersen away down the wing to score in the corner.

Marais went on to ensure the Cheetahs had a losing bonus point, but the Brumbies good start to the second half meant the result was secured long before the Cheetahs rallied later on. 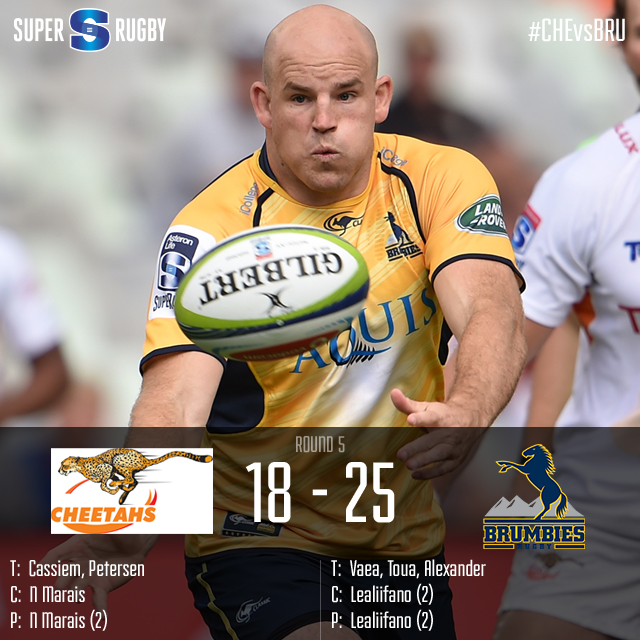