The Brumbies fought hard to defeat the Rebels 26-20 in their Super Rugby AU clash at AAMI Park in Melbourne on Sunday.

It was a deserved win for the visitors, who took full advantage of the Rebels' ill-discipline to grind out the victory, with number eight Rob Valetini putting on a superb defensive display.

The Rebels were the first to strike, crashing over the line in the ninth minute. The hosts showed good composure with ball in hand, banging away at the Brumbies line for over ten phases before hooker James Hanson would finally snipe over from close range. Captain Matt To'omua added the extras.

After a well-earned penalty by flanker Rory Scott at ruck time deep in the Rebels 22m, the Brumbies opted for the lineout. In classic Brumbies style, the lineout drive resulted in Folau Fainga'a falling over the line. But the try was overruled after a reply showed he lost control of the ball at the back of the drive.

In the ensuing scrum, the visitors won a turnover after a massive effort by the forward pack. They failed in the lineout drive that followed, but a few phases later, a double-blast from referee Damon Murphy would see Marika Koroibete sent to the bin for repeated infringements from the Rebels. The Brumbies would have another crack from the lineout and this time they did not disappoint, with Rory Scott getting over the line. Ryan Lonergan kicked the conversion to lock the scores at seven a-piece after 20 minutes.

The Brumbies piled on the pressure towards the end of the half, earning penalty after penalty while camped on the Rebels' line. Murphy was forced to to to the pocket again, with Trevor Hosea the guilty party after an early drive at the lineout. The gutsy Rebels held out this time, with the forwards countering the signature yet predictable Brumbies drive.

But the Brumbies struck minutes later from halfway with a long-range try. After multiple phases, Lonergan would find a flying Caderyn Neville on the angle who went over the whitewash.

On the stroke of halftime, a big hit from Valetini - who was abrasive on defence all afternoon - ended up with the ball being juggled and Tom Wright snapped up the loose ball on halfway and showed sizzling pace to leave the defenders in the dust and go over untouched in the corner. That gave the visitors a deserved 19-7 lead at the break.

The hosts returned rejuvenated and centre Campbell Magnay glided through a gap, showing great pace to run all of 50m before popping the ball inside to Joe Powell, who bounced off Marty Banks and went over next to the uprights. To’moua reduced the deficit to five points and then to just two points after a penalty just seconds after the restart.

But the Brumbies struck back immediately after a bizarre play. After a deep kick, To'omua collected while sweeping across as cover, but Andy Muirhead put pressure on him to clear and the flyhalf kicked the ball straight into his own players head on the 22m. Scott scooped up the loose ball and fired the ball to Bayley Kuenzle in support, who scored a gift try in the corner.

A promising period of attack for the Rebels - who used individual runners straight up the middle - came to an end after giving away a soft penalty at the breakdown and the Brumbies were able to relieve the pressure.

The Brumbies then conceded a penalty under their own poles and with the home side trailing by nine, To'moua opted to knock it over and make it a six-point ball game with eight minutes to play.

With the match seemingly over, an immense scrum from the Rebels on the hooter earned them a penalty. They kicked for touch to set up the lineout but the Rebels would knock the ball on in a scramble at the breakdown, cueing celebrations from the Brumbies players. 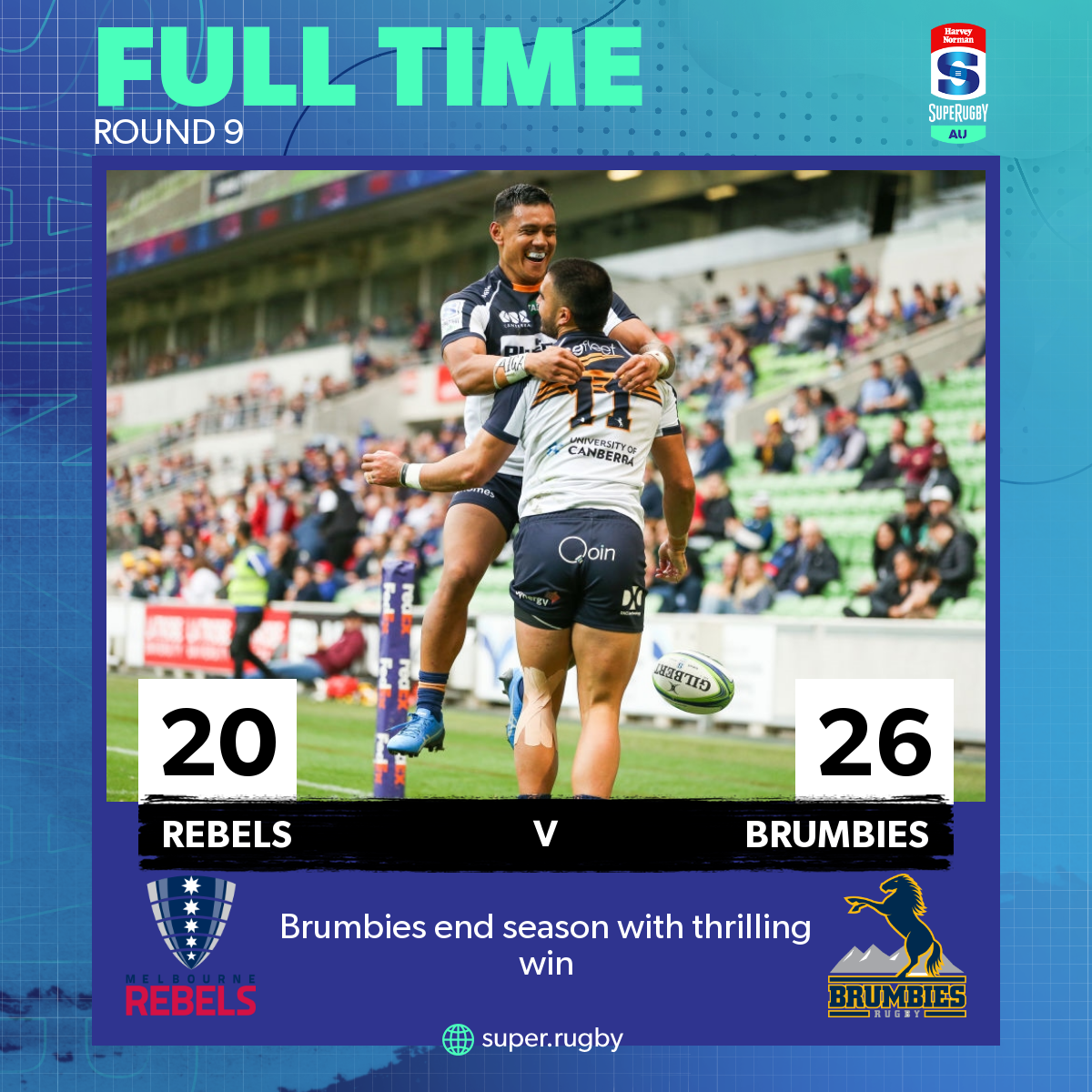