Brumbies Put Rebels to the Sword in Canberra

The Brumbies claimed their second win in a row with a 39-26 victory over the Melbourne Rebels at GIO Stadium on Friday.

Irae Simone, Tom Banks, Tom Cusack, Solomone Kata, Folau Fainga'a and Tom Wright got themselves on the try column for the hosts, while Angus Cottrell (2), Dane Haylett-Petty and Frank Lomani scored for the visitors.

The hosts were turning the screw early on at scrum-time and won a succession of penalties before opting for the scrum again with Scott Sio throwing a sumptuous pass for Simone, who dummied well to break the line and dot down.

Simone turned provider moments later with a beautiful offload out of the back of the hand for Banks to cross the whitewash after the Canberra-based outfit had gotten themselves down the right end of the field.

The Rebels came close to pulling a try back soon afterwards but blew a glorious opportunity when number nine Lomani knocked on at the base of the scrum with the try-line beckoning.

Rebels mentor Dave Wessels would have been pulling his hair out in the coaching box with the inaccuracy of his team's performance.

Pete Samu made a blistering break in midfield before offloading to Powell, who was halted ten metres out before the ball was recycled to fly-half Noah Lolesio, who put through a perfectly weighted grubber kick in the right-hand corner for wing Kate to complete the score.

The visitors finally got themselves on the try column two minutes before the interval when number eight Cottrell powered his way over from close range on penalty advantage.

Cottrell grabbed his brace in similar fashion two minutes after the break to bring the Rebels right back in to the game at 24-14.

In the 53rd minute, Fainga'a dotted down from a blindside wraparound move off the back of a five-metre attacking lineout to get the hosts on the try column for the first time in the second half and extend their lead to 31-14.

The topsy-turvy nature of the match continued as the Rebels thought they had scored off the back of an attacking five-metre lineout with hooker Anaru Rangi breaking off the maul to crash over from close range but it was disallowed for obstruction - albeit unintended.

The next Rebels' try was an opportunistic one as centre Billy Meakes took a cheeky quick-tap penalty before passing to Haylett-Petty, who sold his dummy successfully to scythe through untouched and go over between the posts and cut the deficit to ten at 21-31.

But any hopes of a comeback for the visitors appeared to be dashed when Wright did brilliantly to collect Simone's grubber kick to dive over in the left-hand corner with Lolesio adding the extras for a commanding 39-21 lead.

The Rebels would score a consolation try two minutes from time when Lomani dotted down in the right-hand corner but it mattered little as their opponents ran out 39-26 victors. 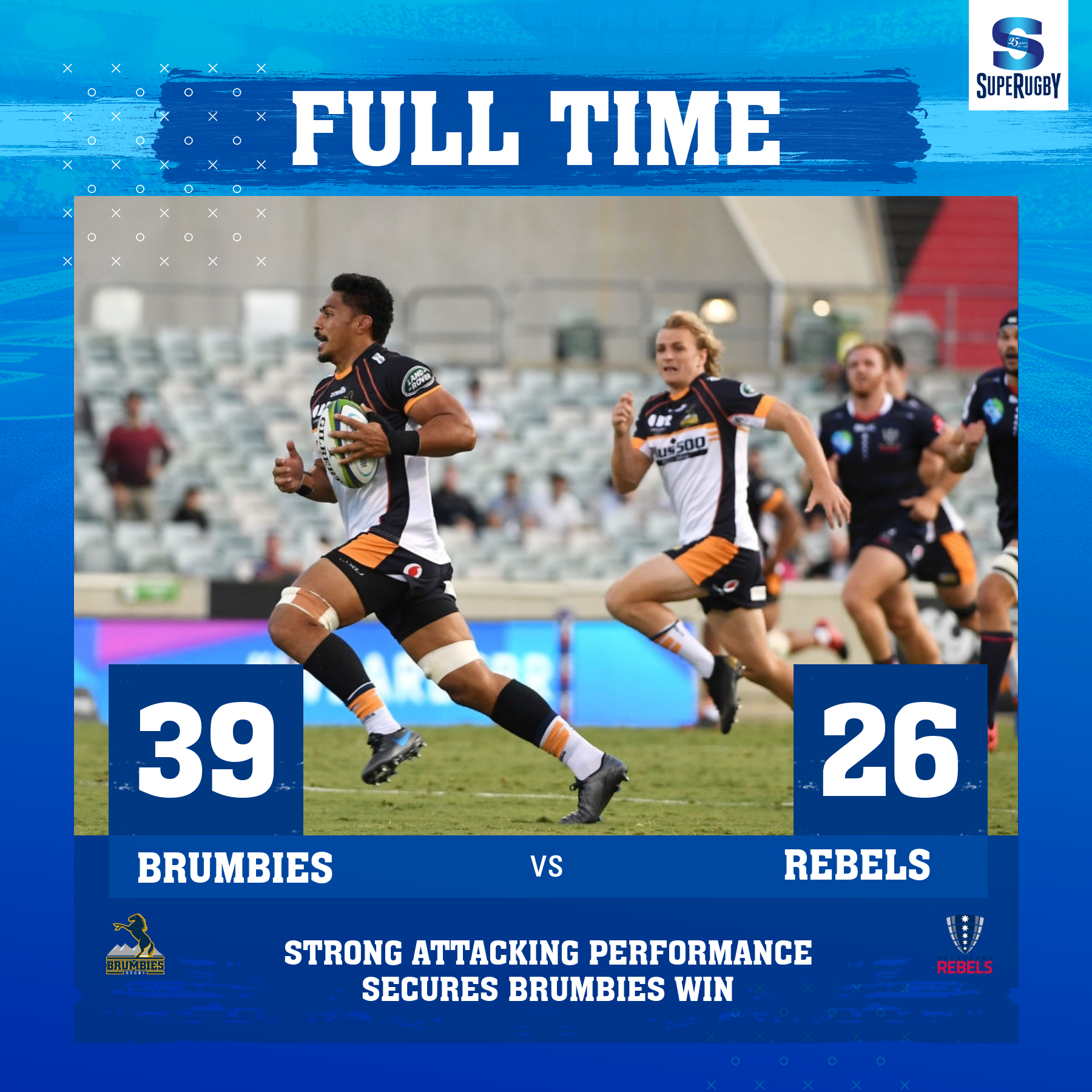