The Brumbies ran in six tries as they beat the Sunwolves 42-19 in Tokyo to secure bonus point and top spot in Aussie Conference.

The Sunwolves started well, scoring in the opening minute after a midfield bomb by fullback Semisi Masirewa. He tapped the ball back in his effort to gather, falling into the hands of a flying Hosea Saumaki, who pinned his ears back and sprinted 35m for the score.

However, the visitors were quick to hit back with three unanswered tries. After going through the phases, a slick backline move left and overlap on the far touchline, with eighth-man Pete Samu eventually crashing over in the corner.

In the 20th minute, while camped on the Sunwolves line, centre Irae Simone received a pass with much work to do, but a big hand-off saw him get over the line.

Eight minutes later, a creative backline move saw winger Henry Speight, gather a lovely kick pass from fly-half Christian Lealiifano on the halfway-line. Speight fed the ball inside and full-back Tom Banks went over untouched. The subsequent conversion blew the lead out to 21-7.

The Sunwolves had the final say of the opening stanza, where a piece of individual brilliance saw Masirewa beat five defenders all on his own to score in the 34th minute to keep in touch with the Brumbies.

But the Australian outfit continued their forward dominance which lead to a hat-trick of tries for replacement hooker Connal McInerney. A line-out maul saw him bag his first in the 48th minute and while yet more Masirewa magic lead to a another Sunwolves try at the end two minutes later, McInerney wasn't done yet.

In a carbon copy of his first try, McInerney took in the ball at the back of the maul following a lineout and the Brumbies forwards march over the line from five metres out.

With eight minutes to play, yet another powerful maul saw the Brumbies pack smuggle McInerney over the line once more. Lealiifano then kicked the final points of the match to go six from six from the boot and seal the Brumbies place at the top of the Australian conference. 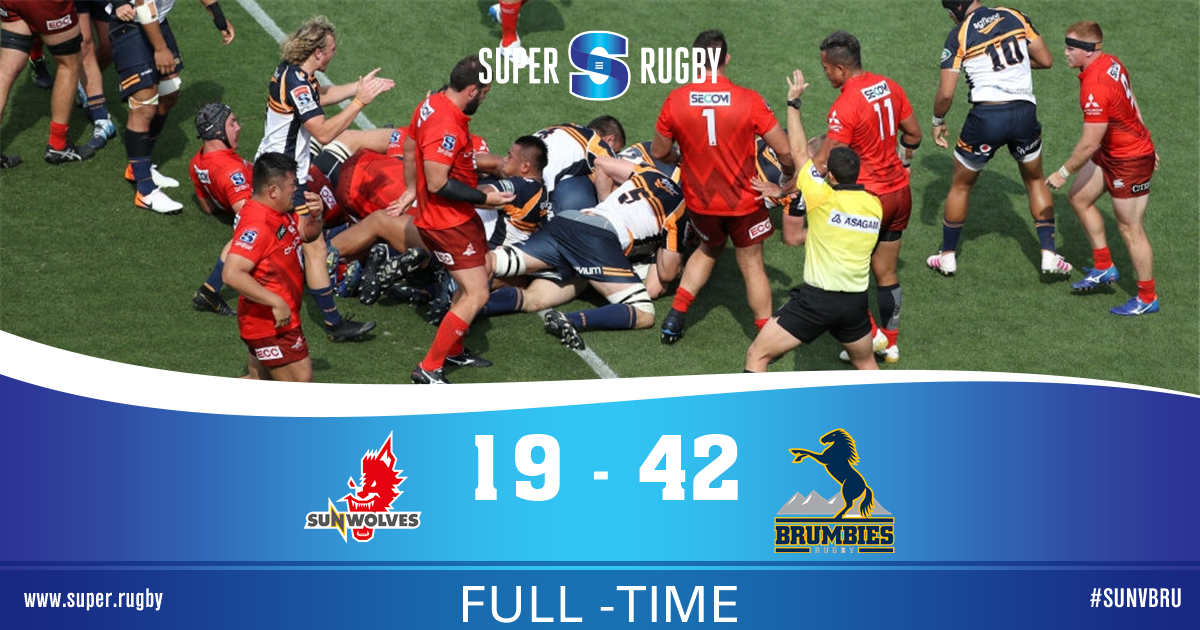