Brumbies show their worth dominating the Chiefs.

The Brumbies upset the odds to record a bonus-point 54-17 win over the Chiefs in Canberra on Saturday.

In a result few expected, the Australian outfit put no less than eight tries past their Kiwi opponents, including five in the first half alone to all but kill off the contest inside 40 minutes.

After an early spell of Chiefs pressure resulted in three-point penalty conversion from Damian McKenzie, the Brumbies soon gained the upper hand as they stunned the Chiefs with three tries in the space of less than 10 minutes.

There was inconclusive evidence from the TMO to give the home side their first try in the 12th minute, but they would dot down conclusively seconds later after a series of pick-and-gos and a shift to the right resulted in center Tevita Kuridrani crashing over.

The Chiefs barely had time to collect themselves when flyhalf Christian Lealiifano passed the ball to full-back Thomas Banks, who beat his opposite number for pace on the outside and ran all the way to the tryline for their second.

And minutes later it was three as Lealiifano sliced through a gap and set up winger Chance Peni with the outside pass to the left.

The Chiefs hit back with a try of their own courtesy of winger Ataata Moeakiola in the 29th minute thanks to a spell of pressure on the Brumbies goal, but the hosts would hit back with two more tries late in the first half to leave the Chiefs shell-shocked at half-time, 33-10 down.

Eighth-man Lachlan McCaffrey scored the first, slipping through the defence after a strong Brumbies scrum, and hooker Folau Fainga'a bagged the second on the stroke of half-time from a line-out maul.

The Chiefs would have had to score first after the break to have any chance of a comeback, but instead it was the Brumbies who picked up their sixth try of the evening in the 52nd minute following a brilliant break by Lealiifano in their own 22 and finished by Peni at the other end of the field.

The Chiefs managed to hit back with their second try of the evening not long after courtesy of substitute Samisoni Taukei''aho, but it was too little too late.

Adding insult to injury, there were two more tries for the Brumbies late on, Josh Mann-Rea getting the ball down from the driving maul in the 70th minute before Wharenui Hawera put the cherry on top minutes before the final whistle to cap a wonderful performance for the Brumbies and a miserable day at the office for the Chiefs. 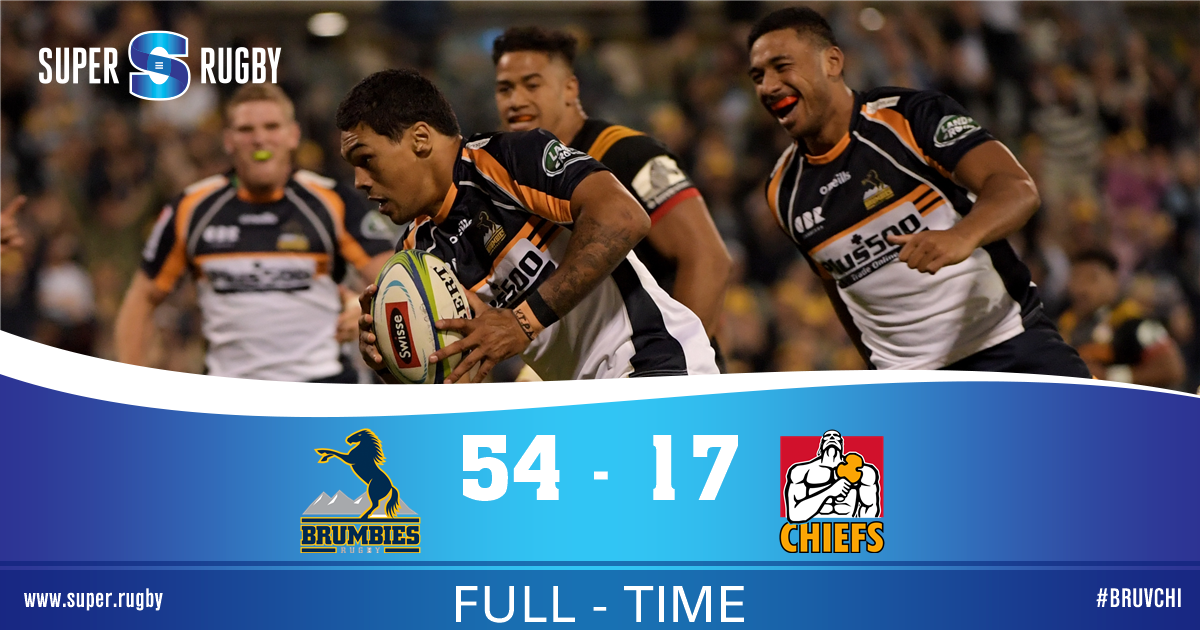