The Brumbies wrapped up the season with a 40-31 victory over Australian rivals the Waratahs in Super Rugby action in Sydney on Saturday.

The Waratahs failed to wrap up a home semi-final place and will be ruing their first-half performance.

Tries from Tom Banks, Richie Arnold, Isi Naisarani, Andy Muirhead, Kyle Godwin and Lausii Taliauli proved too much for the Waratahs who scored through Damien Fitzpatrick, Taqele Naiyaravoro and Will Miller.

Banks took his tally to six tries in his last six when he pounced upon a loose pass from Waratahs centre Curtis Rona, before running the majority of the length of the field to dot down for an early score for the visitors after just two minutes.

The Waratahs got on the board six minutes later with a Foley penalty after illegal play at the breakdown from the Brumbies' Blake Enever.

However, the away side were in again four minutes later when Lealiifano stepped off his left foot brilliantly before three successive offloads released Richie Arnold through a gap - the lock crashing over from close range. Lealiifano added the extras for a 14-3 lead.

And with a quarter of the game gone, it was 21-3 when Richie Arnold turned creator this time, getting the offload away to free Naisarani through a gap for an easy run-in under the posts which made it an easy conversion for Lealiifano.

The Waratahs were beginning to exert some pressure, though, resulting in hooker Folau Fainga'a being sent to the sin-bin for cynically bringing down a maul.

And they finally got their first try of the match when Ned Hanigan made a mini-break and got the offload away for hooker Damien Fitzpatrick to have a clear run to the line. It came in the 31st minute, two minutes before Folau returned to the field.

But Muirhead hit back immediately for the visitors, scoring a magnificent individual effort, although to be fair the Waratahs slipped their tackles far too easily as Muirhead shed four defenders on his 35-metre run to the try-line. Lealiifano's attempt bounced back off the left hand upright but the Brumbies still led 26-10 going in to the interval.

Seven minutes after the interval, Godwin produced a moment of individual brilliance as he broke the line, put the grubber through, which he collected - all before showing the Tahs' defence a clean set of heels. Lealiifano converted for a 33-10 lead.

Having come close on numerous occasions before, Naiyaravoro eventually got himself on the scoresheet after excellent work by Israel Folau to get the offload away for the Fijian flyer to bash over from close range. Foley added the extras to make it 33-17.

With ten minutes to go, the 'Tahs were dealt a blow when replacement lock Tom Staniforth was yellow-carded for an infringement at the maul. But just when it looked as if the Brumbies might capitalise on their numerical adavantage, 'Tahs flanker Will Miller intercepted Brumbies replacement fly-half Wharenui Hawera's pass and show good pace to sprint in for the score. Foley's conversion reduced the deficit to eight points at 33-24.

The Brumbies scored next. Centre Tevita Kuridrani did brilliantly to put a grubber through for Taliauli to collect and finish. But the Waratahs would hit back once again. Harry Johnson-Holmes made a great run and got the offload away for Wilkin to score his first Super Rugby try as the match ended 41-30. 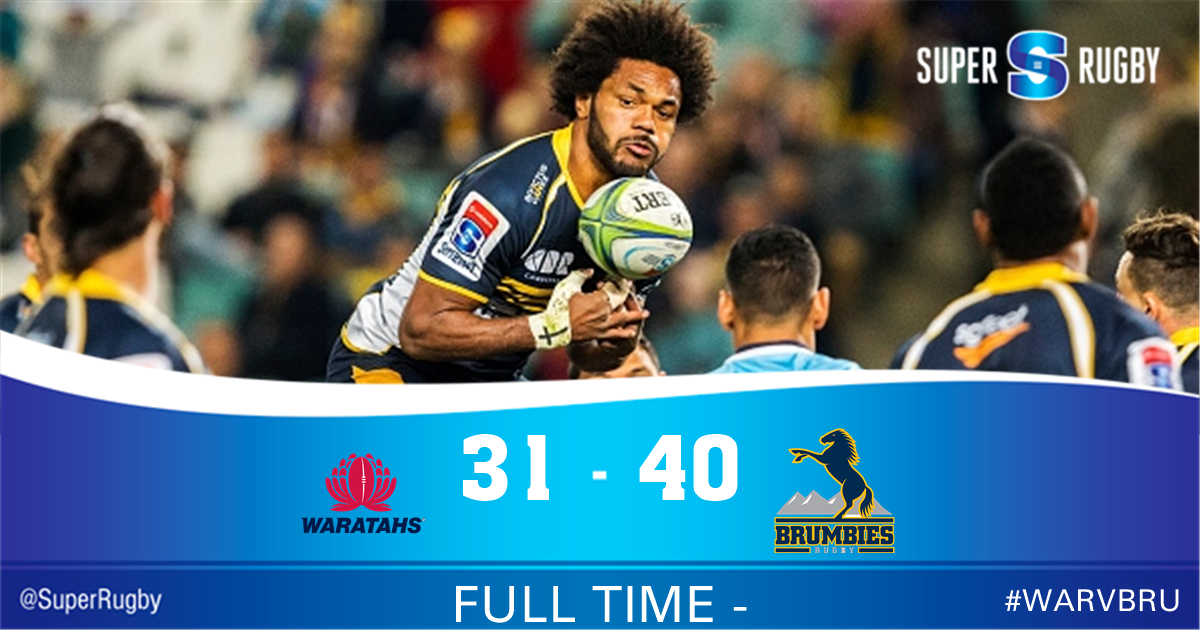