The Brumbies had far too much firepower for the Western Force at the GIO Stadium in Canberra on Friday, cruising to an emphatic 42-14 victory.

While the Force defended manfully at first, their inability to gain any kind of a foothold in the match ultimately cost them dearly, allowing the Brumbies to run in four unanswered first-half tries. The second half was more evenly matched but it was too little too late for the Force to make a competitive game of it.

The result sends the Brumbies back to the top of the Super Rugby AU table with four wins from five, while the Force suffer their fourth defeat of the season to remain down in fourth place.

The Brumbies quickly set about stringing together the phases and applying some pressure, although the Force defence proved equal to what was being thrown at them.

Eight minutes in, the Force were dealt a blow when flyhalf Jake McIntyre was forced off the field with an injury, handing a big opportunity to Jono Lance.

The Brumbies signalled their intent shortly after when they earned a penalty at scrum time and opted to kick for touch rather than take the points on offer, but again the Force defence stood firm despite some very effective picking and driving from the hosts.

The penalty advantages kept coming, however - four in all - keeping the Brumbies on attack and putting the visitors under pressure, and Folau Fainga'a looked to have finally gotten the ball on the line only for the TMO to rule it out.

Again the Brumbies came and again the Force held them back, but when Tevita Kuridrani stuck an arm out to deliberately knock down a Brumbies pass, he got a yellow card for his troubles.

From the ensuing penalty, a slick backline move finally created the space the Brumbies were looking for on the outside as Len Ikitau crashed over for the try.

The Brumbies were nearly in again moments later when a long pass out wide freed up Pete Samu on the far side, but with the tryline beckoning, a last-ditch covering tackle from Jack McGregor prevented what looked to be a certain score.

After nearly 15 minutes of virtually uninterrupted possession for the home side, the Force finally got the ball back when the Brumbies knocked on, only to immediately relinquish it again when they got driven back in the scrum and penalised. That allowed the Brumbies to set up another attacking line-out and there was no real resistance this time as a little pop pass to Ikitau sent the No 13 through for his second try.

An unnecessary high tackle from the Force allowed the Brumbies to set up another line-up out up close, and the home side's total dominance continued as Cadeyrn Neville collected a short pass from Samu and drove over the line despite the attention of two defenders.

When the Force gave away another scrum penalty to put the Brumbies back on the front foot, Mack Hansen broke the line in the midfield from the ensuing line-out before passing it out wide to Andy Muirhead for the finish. Noah Lolesio nailed his fourth straight conversion as the Brumbies took a formidable 28-0 lead into half-time.

The Force came out with plenty of intent in the second half and enjoyed more possession and territory for their efforts. After a lengthy period spent camped inside the Brumbies 22, the try finally came via Henry Taefu after Kuridrani did some impressive work in the build-up.

That five-pointer only seemed to light a fire under the Brumbies, however, who quickly hit back via Lachlan Lonergan to restore their 28-point advantage.

The Force were looking far more competitive now and were nearly in again after stringing together no less than 19 phases, leading to a yellow card to Harry Lloyd for repeated infringements.

The Force kept up the pressure from the ensuing penalty and came within inches of the line, allowing replacement scrumhalf Ian Prior to dot down and score from behind the ruck for the simplest of tries.

Again the Force couldn't stop the Brumbies from hitting back, however, as all their good work was undone by a simple Brumbies move that sent the ball out wide where Muirhead had acres of space to score.

That was how it ended, as the Brumbies finished the stronger of the two teams to cruise to the bonus-point victory. 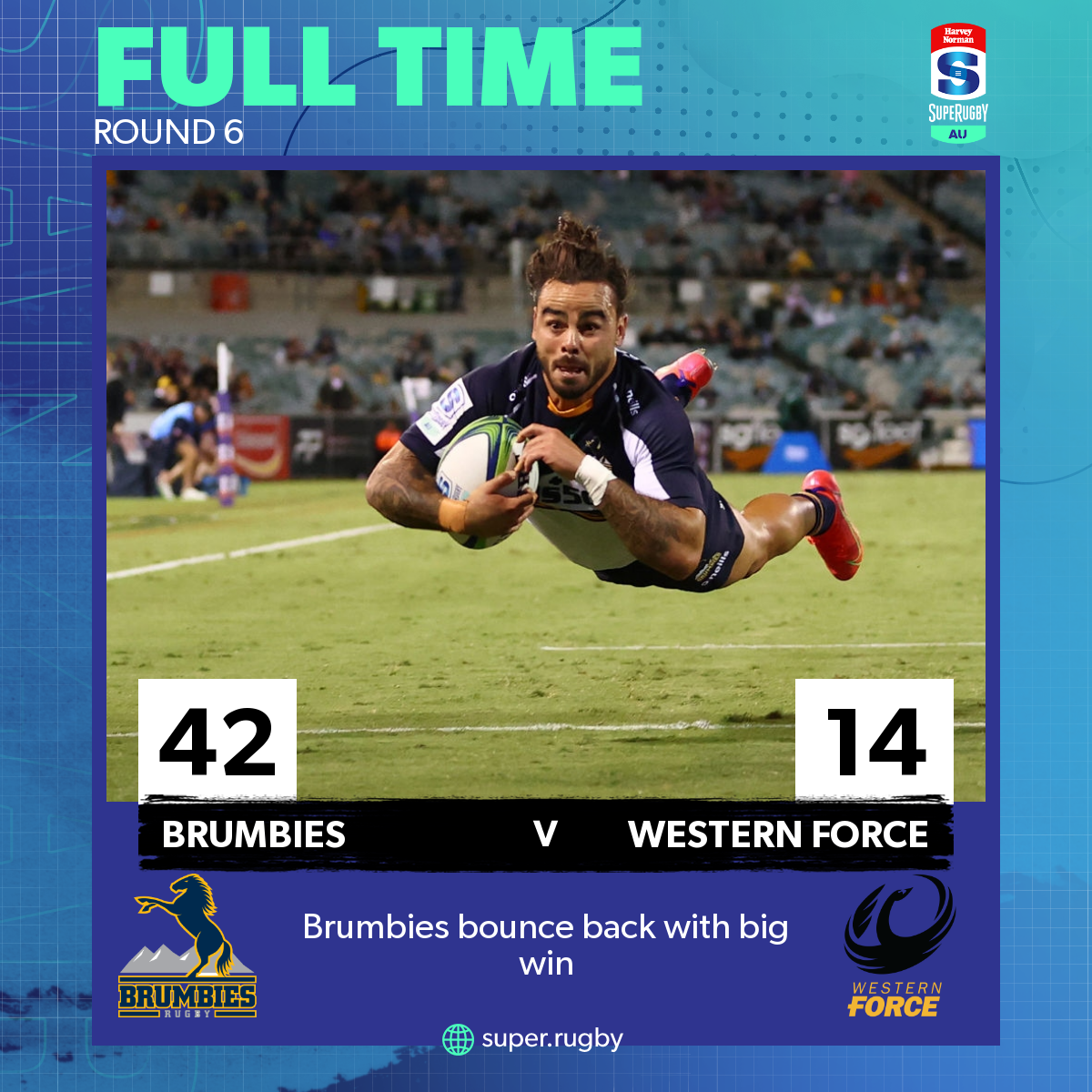