Brumbies too good for Force

Australian Conference leaders the Brumbies retained their unbeaten status after notching a 31-14 victory over the Force in Perth on Friday.

Despite heading in to this game as favourites, things didn't always go according to plan for the men from Canberra as the home side delivered a gutsy display.

But despite their opponents' competitive effort, the Brumbies clinical first half showing set up their win and they outscored their hosts four tries to two after leading 17-7 at half-time.

The Brumbies did most of the attacking during the opening period and after Christian Lealiifano with a penalty in the third minute they soon took control of proceedings after Pek Cowan was sent to the sin bin for deliberately collapsing a maul.

The visitors made their numerical advantage count and soon scored two quick tries. First Stephen Moore barged over from a line-out maul in the 16th minute and five minutes later Matt Toomua rounded off after running onto a pass from Scott Fardy close to the tryline.

When you do something amazing and your whole squad was there to see it #SuperRugby #FORvBRU pic.twitter.com/4IBu1HHAr5

The Force were battling to keep up with their opponents but the hosts were handed a lifeline in the 28th minute when Tomas Cubelli was yellow carded for a professional foul deep inside his 22.

The hosts' soon opened their account - Luke Morahan rounding off after running a perfect angle which breached the Brumbies' defence.

The second half was a more even affair and the Brumbies had to wait until the 54th minute to extend their lead. Joe Tomane got his name on the scoresheet thanks to powerful burst in which he beat four defenders beore crossing for his side's third try.

The Force were soon down to 14 men again after Semisi Masirewa was yellow carded for taking Tevita Kuridrani out in an aerial challenge.

But unlike with Cowan's sending off, the Force actually played better while Masirewa was off the field and were rewarded with a Ben Tapuai try after Morahan did well in the build-up.

The rest of the match was a scrappy affair as both sides tried to gain the ascendancy. Although the Force did well to match the Brumbies in most facets of play, they spent the last five minutes defending inside their own 22.

The Brumbies continued attacking and were eventually rewarded with their fourth try, scored by Joss Mann-Rea after David Pocock was initially held up over the tryline. 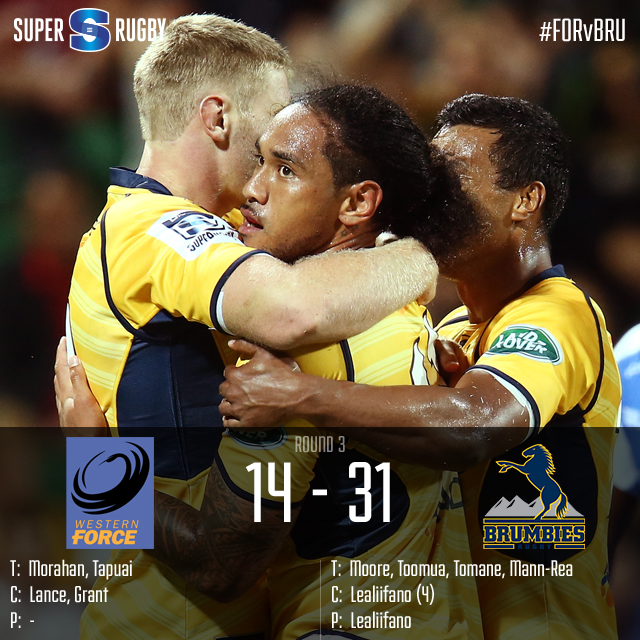