Brumbies Too Good For Spirited Sunwolves

The Brumbies closed the gap on the Rebels and Waratahs in the Australian Conference following a 41-31 triumph over a gallant Sunwolves at the GIO Stadium.

Despite being in the ascendency for much of the first 43 minutes, Dan McKellar’s charges only held a 19-17 advantage. David Pocock, Lachlan McCaffrey and Tom Banks all touched down before Jason Emery and Hencus van Wyk responded for the visitors.

At that point, there may have been a few concerns among the Canberra-based side’s supporters, but their team regained their composure and effectively secured the victory with Andy Muirhead, Henry Speight and Tom Cusack going over.

Ed Quirk and Kai Ishii crossed the whitewash for the Sunwolves but Speight’s effort made sure that the Brumbies would go away with the five points.

The Australians were dominant in the early exchanges and created a number of opportunities. Speight was particularly threatening as the hosts managed to find space in the outside channels and it took them just seven minutes to open the scoring.

It came from close range, with the Canberra outfit opting to power their way to the line through the forwards, and Pocock eventually barged over – Christian Lealiifano converting – for a 7-0 advantage.

McKellar’s men continued to control possession and duly built on that positive start, leading to another chance inside the opposition 22. With the Sunwolves struggling to handle the Brumbies’ larger units in the pack, they eventually yielded when McCaffrey crossed the whitewash.

To their credit, the visitors maintained their enthusiasm and for the first time managed to go through the phases. Although they failed to put too much pressure on the Brumbies' rearguard, the home side conceded a needless penalty and Hayden Parker got them on the scoreboard from the tee.

The Japanese team had hope but they were being outplayed and a neat first-phase move resulted in a third score, this time for new Wallabies' squad member Banks.

Even a poor error from Lealiifano, which led to Emery touching down, and another try from van Wyk – this one at the start of the second period – could not deter the Brumbies.

Following the South African prop’s effort, just two points separated the sides but the hosts immediately responded and another excellent move allowed Muirhead to finish in the left-hand corner.

It was the boost the Australians needed to move away from their opponents and complete the victory in the third quarter. McKellar’s men scored two quick-fire tries from Speight and Cusack to take them 17 points clear going into the final 20 minutes.

Quirk and Ishii did go over for the Sunwolves late on but it proved to be mere consolation as Speight sealed his brace and a fifth win of the campaign for the Brumbies. 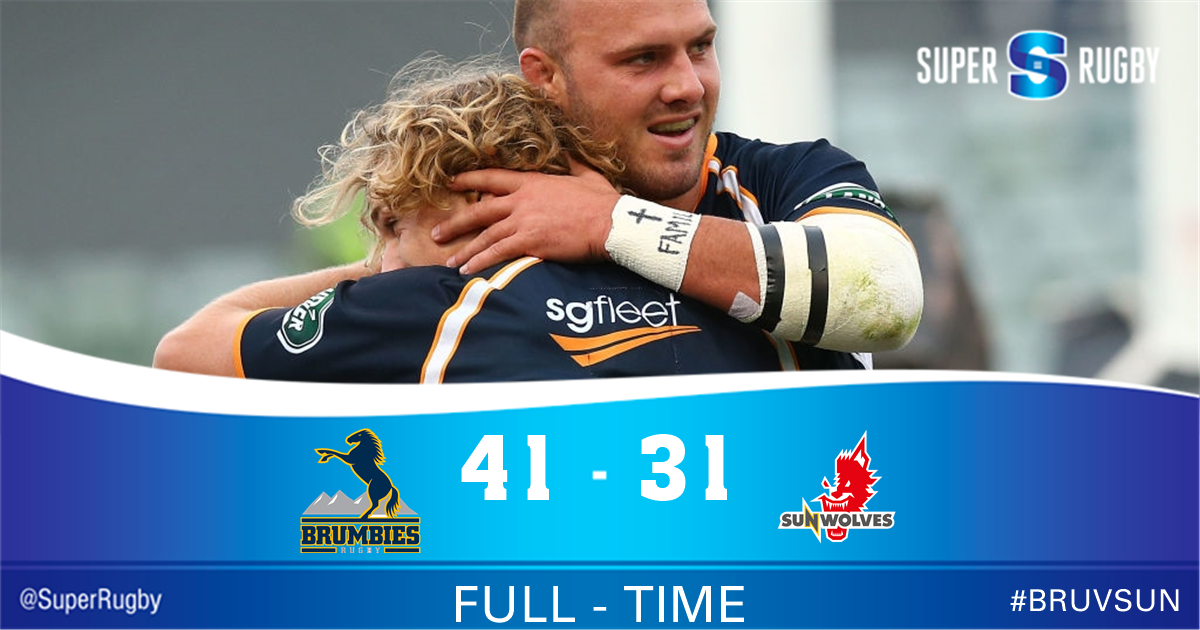