The Brumbies overcame Australian rivals the Reds 40-27 in a ding-dong encounter at GIO Stadium that saw nine tries scored.

The visiting Reds actually started out the better of the two sides and started off the scoring in the sixth minute with a well-worked Bryce Hegarty try in a move that went through six phases before the score. He took the conversion himself to make it 7-0.

It took a while for the hosts to find a way into the game, but they did just that in the 17th minute after a patient eight-phase move of their own. They had more space to move around thanks to Taniela Tupou's 14th-minute yellow card for a high tackle.

They eventually threw it wide for Andy Muirhead to slip, quite literally, over the line for the Brumbies first try. Christian Lealiifano missed the conversion.

The match was very evenly contested for most of the first half and neither side was able to find a way through the defense. Hegarty did add another three points with a penalty, though.

That is, until the 36th minute when everything went horribly wrong for the Reds. A massive scrum from the Brumbies saw them shove the opposing pack over their own line to allow Lachlan McCaffrey to dot the ball down at the base of the posts and Lealiifano kicked the conversion to make it 12-10.

Then, four minutes later, after the siren had sounded for half time, the home side was awarded a penalty try after the referee decided the Reds had stopped a maul illegally. No conversion is needed for a penalty try and Scott Higginbotham was also sent to the sin bin for 10 minutes. The score was 19-10 at half time.

Playing a man down at the start of the second period, the Reds really struggled.

First, they were destroyed by another Brumbies maul to see Rory Arnold driven over for a try in the 47th minute before Tom Wright snuck into their line to intercept a pass and score a try of his own two minutes later.

Lealiifano kicked both conversions as the score raced to 33-10.

After Higginbotham returned the Reds were able to fight back somewhat. A strong scrum against the head saw the Brumbies pack implode, allowing Jock Campbell to smuggle the ball out and break down the middle of the pitch. He eventually off-loaded for Duncan Paia'aua to race over the line. Hegarty added the extras to make it 33-17.

It all appeared to be for naught, though, as the Brumbies regained their lead with yet another powerful maul, this time in the 71st minute with Murray Douglas getting the score. This time the conversion was slotted by Ryan Lonergan, 40-20.

The Reds had the final say, but it was nothing more than a consolation when a well-worked move ended with Liam Wright busting over the line. Hegarty's conversion ensured the match would end 40-27 in favour of the Brumbies. 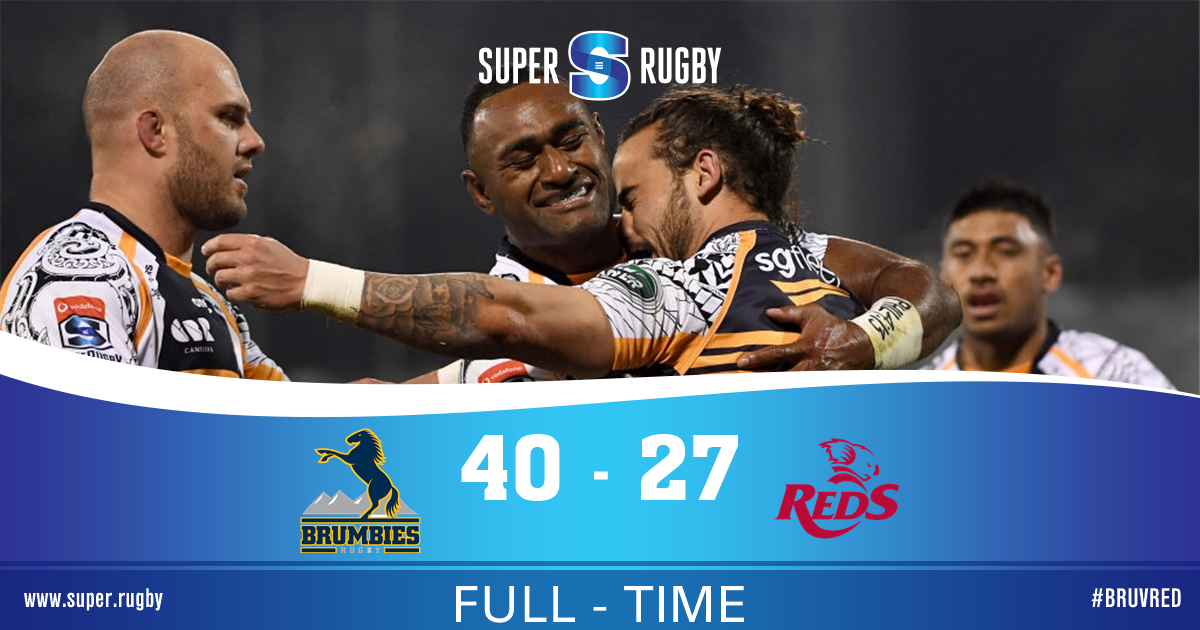