The Blue have confirmed the appointment of current Currie Cup head coach Pote Human as Head Coach for the 2019 Super Rugby season.

Human epitomizes everything that the #BullsFamily stands for, and is the perfect blend of good rugby values together with the passion and understanding of the modern game. The Blue Bulls Board of Directors believe that Human, who acted as an assistant coach to John Mitchell during the past 12 months, will build on the momentum the Vodacom Bulls as well as the Vodacom Blue Bulls gained during the 2018 season. With some exciting new signings and good continuity, the Board are confident he will return the brand to winning ways.

As a player, Human was a no-nonsense loose forward, one that racked up 116 games for Eastern Province, and 82 for the Free Sate, 64 of which he captained for the Bloemfontein based side.

Human also spent two years at the Ricoh Rugby Club in Japan as Forwards coach, before returning as Director of Rugby at Garsfontein High School. He then became head coach of Griquas for a short stint, returning to Pretoria to coach Tuks to a Varsity cup title.

His role at Loftus over the last few years as Super Sport Challenge & U21 Head Coach, Super Rugby Forward coach as well as Currie Cup head coach has been immense, and became clearly evident in the exciting brand of rugby currently being played by the team.

Willem Strauss, Chairman of the BBCo board and President of the union, expressed his excitement on the appointment: “Pote has proved himself at every level and has a track record that speaks for itself. We are privileged to have men of his calibre within our system, that can step up into this role. He has the full support of everybody at Loftus.” 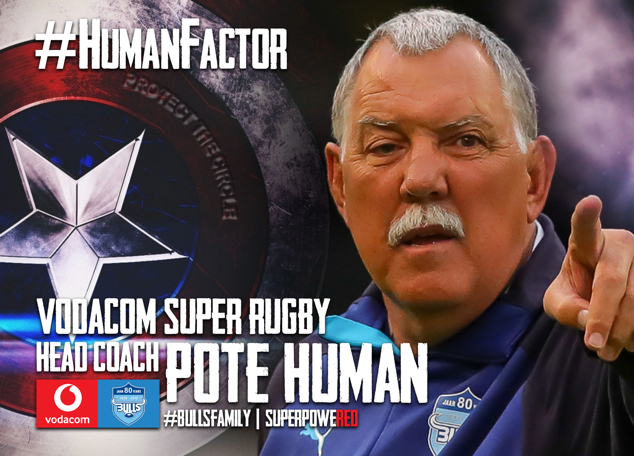 Alan Zondagh also joins the #BullsFamily, coming in as Director of Rugby. He will be responsible for overseeing the comprehensive rugby structures at Loftus, while supporting Human and his management team in their new roles.

Strauss on Zondagh: “Alan is a rugby visionary, and with his international experience he will add immensely to the future growth of this brand. He will also serve as a mentor to our coaches and management, and I believe that they will gain a lot from having a guy of his calibre around. We would like to officially welcome him to the #BullsFamily, and are looking forward to the difference he will make.”

Furthermore, the BBCo is happy to confirm that Springbok coach Rassie Erasmus will also be available to mentor Human and his team during the pre-season and heading into Super Rugby. This further amplifies the close working relationship between the SA franchises and Erasmus as SARU’s Director of Rugby and current Springbok Head Coach.

Details regarding Human’s support staff and assistants will be announced in due course.