The Bulls breathed a huge sigh of relief after holding on for a hard-fought 30-27 victory over the Sunwolves in Singapore on Saturday.

As expected the visitors kept play mostly amongst the forwards and both sides crossed for three tries, with two of the Bulls' five-pointers coming from line-out drives inside their opponents' 22.

The Bulls dominated the territorial and possession stakes and although the Sunwolves were competitive throughout, a combination of unforced errors and poor defending led to their downfall.

They didn't leave empty-handed though, as a late Yuki Yatomi try secured them a bonus-point for losing by less than seven points.

But just like their previous matches, the tournament newbies faded badly as the match progressed - especially in the second half - and they are still winless after playing four matches.

HIGHLIGHTS: #SuperRugby returned to Singapore on Saturday as the Bulls held on for a narrow triumph over the Sunwolves.

The victory is only the Bulls' second one of the season and the result means they are second in the Africa 1 Conference standings, with 10 points from four matches, while the Sunwolves are still languishing at the bottom in the same group with two points from the same number of matches.

The Sunwolves made a terrific start and opened the scoring as early as the second minute.  This after Burger Odendaal failed to gather the ball deep inside his 22 and Riaan Viljoen gathered before offloading to the on-rushing Andrew Durutalo who barged over from close quarters.

Tian Schoeman then added a penalty for the Bulls shortly afterwards before Tusi Pisi added a three-pointer from the kicking tee to restore his side's seven-point lead.

Schoeman slotted another penalty, after Hitoshi Ono was punished for an indiscretion at a ruck but the Sunwolves then suffered a setback midway into the half when Tomas Leonardi was sent to the sin bin for playing the ball on the ground close to his try-line.

Schoeman made him pay for his indiscretion by slotting the resulting penalty and the visitors soon took the lead, in trademark fashion, when Adriaan Strauss barged over from a line-out drive in side the Sunwolves' 22.

And the Bulls soon madetheir numerical advantage count when Adriaan Strauss dotted down, from a trademark line-out drive close to the Sunwolves' try-line.

Schoeman converted, which meant the Bulls led 16-10 at half-time and seven minutes after the restart it was more of the same when Roelof Smit barged over after another maul at the set-piece.

Pisi replied with another penalty in the 51st minute before Akihito Yamada crossed for the home side's second try after Pisi put him space with a wel-timed pass in the build-up.

With the score now at 23-20 to the Bulls, after Pisi's conversion, the visitors needed another try to seal victory. Jamba Ulengo provided the crucial score after dotting down against the base of an upright in the 65th minute and the Sunwolves were dealt another blow when Ed Quirk was yellow carded for a professional foul shortly afterwards.

The Bulls had the game in the bag but the Sunwolves didn't surrender and were rewarded when Yamada dotted down shortly before full-time from a well-worked lineout set piece. 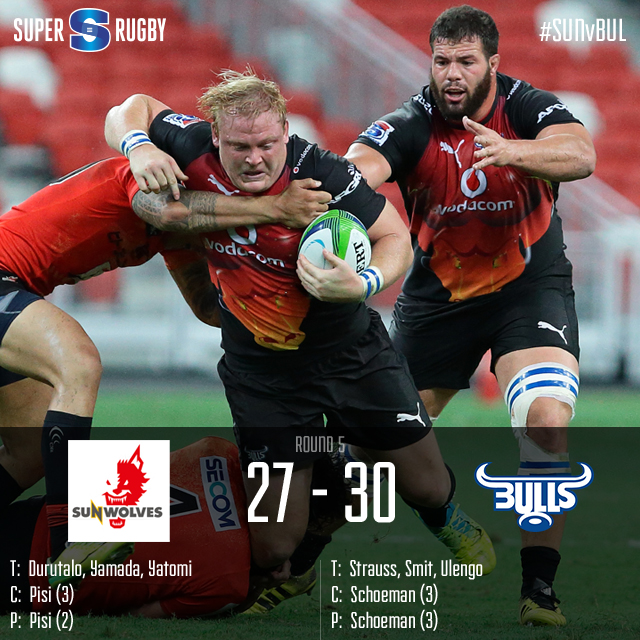