A non-stop points-fest ended with the Bulls coming away from the last match of regular season against the Lions at Loftus Versveld with a 48-27 win.

The match started in stunning fashion.

Inside the first minute, Aphiwe Dyanti shrugged off a couple of weak tackles from Jannes Kirsten and Handre Pollard before offloading to Hacjivah Dayimani, who raced 50 meters and handed off Rosco Specman before scoring the magnificent try. Elton Jantjies kicked the conversion to make it 7-0.

Andre Warner caught the Lions off-guard with a quick penalty and darted toward the line before recycling the ball to Hanro Liebenberg to dot the ball down against the upright. Pollard added the extras.

Jantjies kicked a penalty to make it 10-7 in the 10th minute, but Liebenberg scored his second try of the game less than 60 seconds later to put the Bulls ahead for the first time.

After kicking for the corner the Bulls set up what seemed like an unstoppable maul that completely bulldozed the Lions pack to send the flanker over. Pollard was again successful to extend their lead to 14-10.

The non-stop action continued as Andries Coetzee kicked a drop-goal in the 14th minute to put the visitors within a point, but the Bulls again responded with a try within 60 seconds.

Lizo Gqoboka scored a real prop's try by picking up the ball from a ruck close to the line, put his head down and just bashing his way over the line. Pollard kept his 100% record to make the score 21-13.

The game was only 20 minutes old at this point.

A rare five minutes went without the score changing before Pollard knocked his first penalty of the game over, which was followed by two missed drop goals in quick succession from Shaun Reynolds and Coetzee.

Jantjies then tried his luck with a long-range penalty and this one was successful to pull a bit of the deficit back. He added a second shortly before half time to bring the score to 31-19 at the break.

The start of the second period was a bit more measured from both sides.

Jantjies kicked a penalty to narrow the gap even further and RG Snyman was sin-binned for a dangerous tackle on Malcolm Marx to stunt the Bulls attacking potential.

Their defense seemed to have weathered the storm of being a man down, but they sprung a leak moments before Snyman was due back on the field.

This time the Lions gave the Bulls a bit of their own medicine with a powerful maul followed by Cyle Brink crashing over the line in the 56th minute. Jantjies whiffed the conversion but the match was well-poised at 31-27 to the Bulls.

However, once back to 15 men, a powerful last 20 minutes of the match saw the hosts comfortable winners in the end.

Pollard started the rout with a lovely weighted pass to Cornal Hendricks, cutting out three Lions, and the winger beat Coetzee with a good step to score in the corner. Pollard missed the conversion.

However, the flyhalf grabbed a try of his own in the 65th minute, with a hard direct run at the gain line cutting straight through the visitors. He converted his own try to make it 43-27.

They were at it again in the 72nd minute. Another beautiful pass from Pollard put Manie Libbok through this time. Libbok attempted his own conversion from pretty much directly in front of the poles and embarrassingly missed.

They thought they had a try late on, but the final pass from Pollard to Warren Gelant was deemed to have been forward by the TMO and was ruled out. 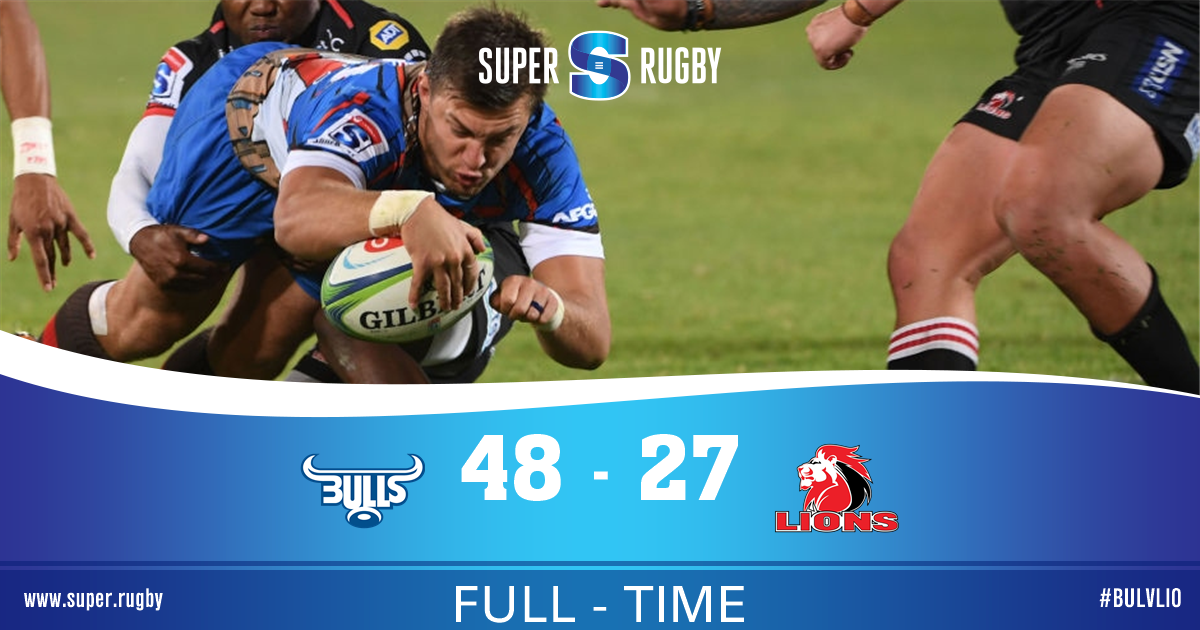