The Bulls got their tally underway in the fourth minute with a three-pointer from Handre Pollard's boot following a high tackle on hooker Schalk Brits.

Six minutes later, Pollard converted his second penalty of the night from right in front after Jacques Vermeulen was pinged for unlawfully playing the Bulls No 9.

The Bulls were comfortably dominating proceedings and were rewarded with their opening try in the 19th minute courtesy of powerful center Jesse Kriel following a smart backline move started by Pollard and finished with a clever one-two between Kriel and winger Cornal Hendricks.

Pollard added the extras to open up a 13-0 Bulls lead and put the home side in a strong position with just a quarter of the game completed.

The Sharks were searching for a way back into the contest, but there handling was letting them down and they instead got caught in a back and forth tactical kicking contest.

With 10 minutes left in the half, Pollard made it 16-0 with his third three-pointer of the night after the Bulls were awarded a scrum penalty by referee Marius van der Westhuizen.

It was all far too easy for the Bulls, and with three minutes to go, Pollard made it 19-0 after Coenie Oosthuizen was penalised for losing his bind in the scrum.

The visitors desperately needed a response after the break, and they were able to provide just three minutes in when hooker Akker van der Merwe threw a clever pass to create some space from Jeremy Ward, who crashed over to get the Sharks on the board.

Unfortunately for the Sharks, the Bulls hit back almost immediately with their second try of the afternoon following an impressive move started by Pollard, who put the large frame of Hanro Liebenberg into space before he passed it to Rosko Specman to cross over in the corner.

More ill-discipline from the Sharks in the form of a second penalty for a high tackle saw Pollard make it 27-7 in the 52nd minute.

The Sharks refused to lie down, however, and were back in business just three minutes later courtesy of eighth man Dan du Preez, who went over underneath the uprights for a converted try following a solid maul and a quick offload from scrumhalf Louis Schreuder.

The visitors were now within two scores of taking the lead, but the Bulls defence was holding out. With 11 minutes to go, the Sharks coughed it up as they assaulted the Bulls five metre line, allowing them to escape unharmed.

That wasted opportunity would end up costing the Sharks dear, as the Bulls finished the stronger of the two teams, with Pollard adding a drop goal late on before Specman rubbed salt in the wounds in the dying seconds by getting around the defence and showing off his pace to score his side's third and final try. 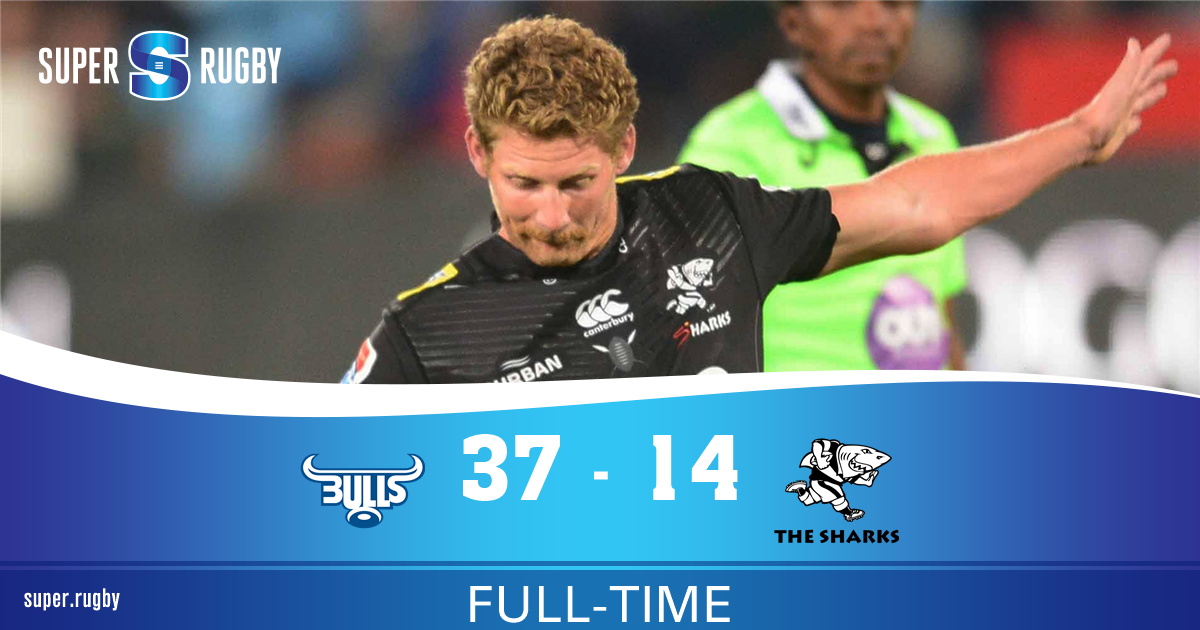