The Bulls weathered a second half storm from the Waratahs to emerge from the Super Rugby encounter at Loftus Versveld with a 28-21 win.

Neither defensive coach would've been proud with what they saw in the opening exchanges as the score rushed to 15-7 in favour of the Bulls within the opening 20 minutes.

Handre Pollard opened the scoring with a penalty goal in the 10th minute, less than 120 seconds before Warrick Gelant would cross the whitewash for the game's first try.

It all started with a botched Ivan van Zyl box kick that RG Snyman did fantastically to reclaim, despite the fact that it landed nowhere near where it was intended. The ball was then recycled wide expertly to Gelant who went over in the corner.

The Waratahs hit back immediately, counter attacking effectively from a turnover in the Sharks half. The home sides defensive line was left bamboozled by some slick handling and finished off by Nick Phipps going over the line.

The Bulls had the initiative going into half time, though, with Duane Vermeulen stealing an intercept and powering his way over the line before Pollard added a 57-metre penalty goal to give the Bulls an 18-7 half time lead.

Pollard extended their lead again at the start of the second period with another penalty, but the home side then came under some serious fire.

In the 49th minute the Bulls almost won a tighthead scrum, but Nick Phipps just about managed to get the ball out and offload to Kurley Beale, who sped through the gap to and score to get his side back into the game.

Moments later, the Bulls survived another scare with Cornal Hendricks pulling off a miraculous try-saving tackle. The Waratahs kept pushing, though, and would be rewarded for it.

With just 15 minutes on the clock the Australians managed to pull level with the home side at 21-all. Again from scrum time, but this time the set up was a lot cleaner for the visitors. It allowed them to change the direction of attack with lethal efficiency and send Curtis Rona over the line.

However the Bulls had enough in the tank to send Simphiwe Matanzima, who was part of a Bulls front row (substitutes included) that impressed all match, crashing over the line in the 70th minute and secure them victory. 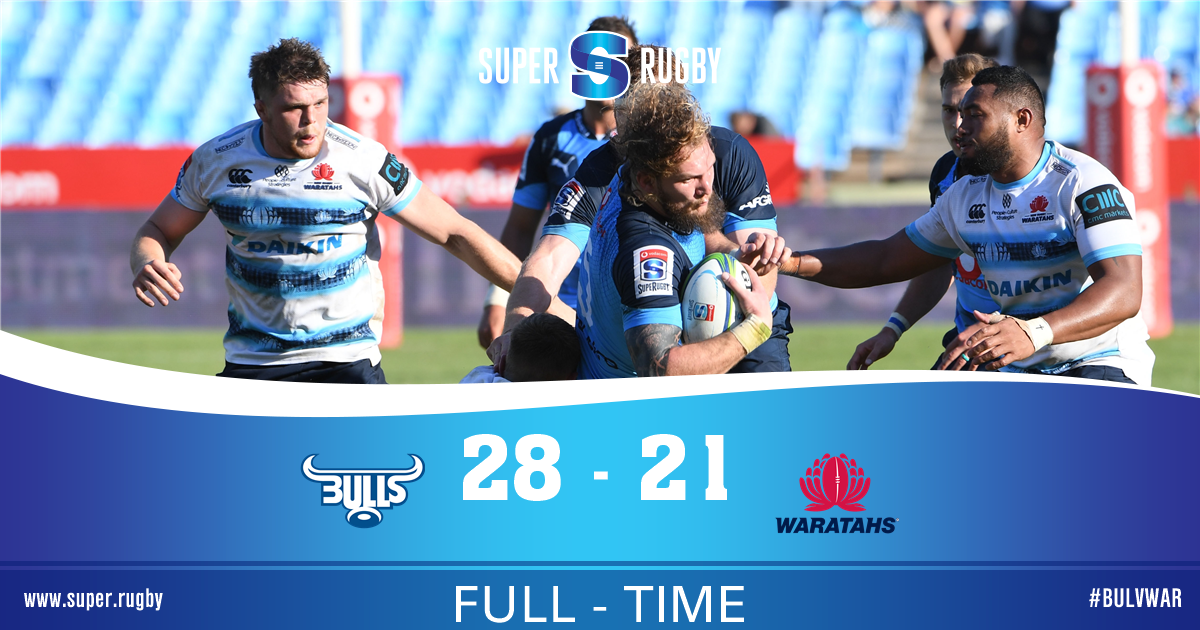