Bulls overcome the Sharks in an entertaining clash

The Bulls secured a hard-fought 39-33 victory over the Sharks at Loftus Versfeld on Saturday to move in to ninth place on the standings.

The men from Pretoria take a giant leap on the overall standings from 12th, leapfrogging the Sharks and Reds in the process.

The match was a great advert for South African rugby, with both sides playing at a high tempo with great width.

The Bulls have now done the double over the Sharks, following up their 40-10 victory in Round Eight in Durban with victory here.

The Bulls took the lead when Curwin Bosch was sin-binned for tripping up opposite number Warrick Gelant in the 10th minute, resulting in the Sharks having a try disallowed.

The Bulls opted for touch from the resulting penalty and their decision to do so was vindicated. The ball was taken off the line-out from the right touchline to the left where Jesse Kriel put in a wickedly bouncing grubber kick which deceived Makazole Mapimpi and was snaffled up by Gelant who gratefully accepted the gift, collecting and diving over for his sixth try of the season. Fly-half Handre Pollard slotted the conversion for a 7-0 lead.

Soon after, Kriel truned from creator to try-scorer when he spotted a hooker in front of him, threw a dummy and stepped his way through a floundering Sharks defence to dot down for a quickfire second as Pollard added the extras for a 14-0 lead. 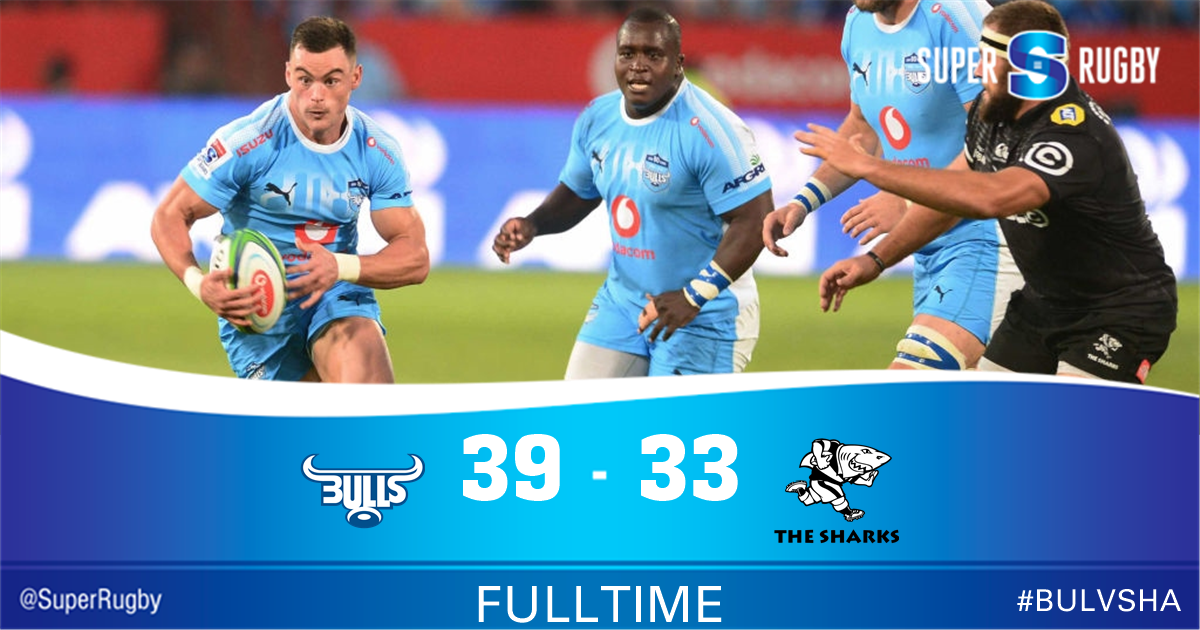 But just five minutes later, the Sharks were right back in the game when Bosch received a defence-splitting offload from Tendai Mtawarira to sneak in under the poles. Sbu Nkosi had made the initial break, with Akker van der Merwe also instrumental in the build-up with an offload for the ‘Beast’.

The topsy-turvy nature of the game, continued, however, as the Bulls reasserted their superiority and restored their lead when Travis Ismaiel did brilliantly to keep his body within the field of play and release the ball for Roelof Smit to pick up and dot down. Pollard’s conversion made the score 19-7 to the Bulls with 27 minutes gone.

Soon after, RG Snyman received a yellow card for a late and unecessary hit on Robert du Preez with the Sharks immediately capitalising from the resulting penalty as flanker Jacques Vermeulen went over courtesy of a well-worked move at the front of the line-out straight from the training ground.

A 37th minute Pollard penalty extended the Bulls’ lead to eight. But a Bosch penalty from inside his own half would cut the deficit to just five as the sides went into the interval.

Van der Merwe did well to win a penalty for his side five minutes after half-time and fly-half Robert du Preez made no mistake from the tee as the Sharks moved to within just two points of the Bulls, trailing 20-22.

Soon after, Du Preez put the Sharks into the lead for the first time in the match with another well-struck penalty.

This sparked the Bulls in to a response as they immeditely upped the ante, taking the ball the width of the field and stretching the Sharks defence before Johnny Kotze dotted down in the left-hand corner after great combination play between Kriel and Gelant. Pollard’s conversion made it 29-23 to the Bulls after 55 minutes as the home side regained the lead.

And the Bulls extended their lead after some relentless pressure. Kriel was halted inches short by a good last-ditch tackle from Nkosi. The ball was recycled to Lood de Jager, who capped a superb individual performance with a try, showing good control and reach with the finish to dot down one-handed.

The Sharks’ cause wasn’t aided when Lukhanyo Am received a yellow card for tackling the player in the air as Pollard took the lead out to 39-23 with the resulting penalty.

Shortly afterwards, the Sharks scored their third through Jean-Luc du Preez after good interplay between backs and forwards to set him on his way over the line. Robert du Preez’s conversion meant the Sharks were nine points behind at 39-30 with ten minutes to go.

Although the Sharks were unable to come back, fly-half Du Preez would ensure they at least took a losing bonus-point from the game with a penalty which closed out matters at 39-33 in the end.