Bulls Shock the Hurricanes in Pretoria

The Bulls claimed a tremendous scalp in their first Super Rugby game of 2018, beating the Hurricanes 21-19 at Loftus Versfeld on Saturday.

The hosts shocked the Hurricanes with a scintillating start to the game, taking a 16-12 lead into half-time. They weathered the Hurricanes storm in the second half, holding on for an incredible upset.

The first try of the game came as early as the fourth minute. Jesse Kriel fended off two tacklers on the left, getting a pass away to Johnny Kotze, who finished off the move.

Handré Pollard missed the conversion, but he made amends three minutes later, popping over a penalty from 44 metres out.

However, the Hurricanes hit back in the 12th minute, with Ricky Riccitelli grounding the ball after a powerful driving maul from an attacking lineout.

Six minutes later, Wes Goosen gave the visitors the lead, capitalising on some woeful defending. He chipped and chased on the left, gathering the ball with nobody back to stop him and finishing off.

It looked as if the game was slipping away from John Mitchell's men, and things went from bad to worse in the 25th minute, when Pierre Schoeman was yellow carded for a swinging arm to a Hurricanes head. 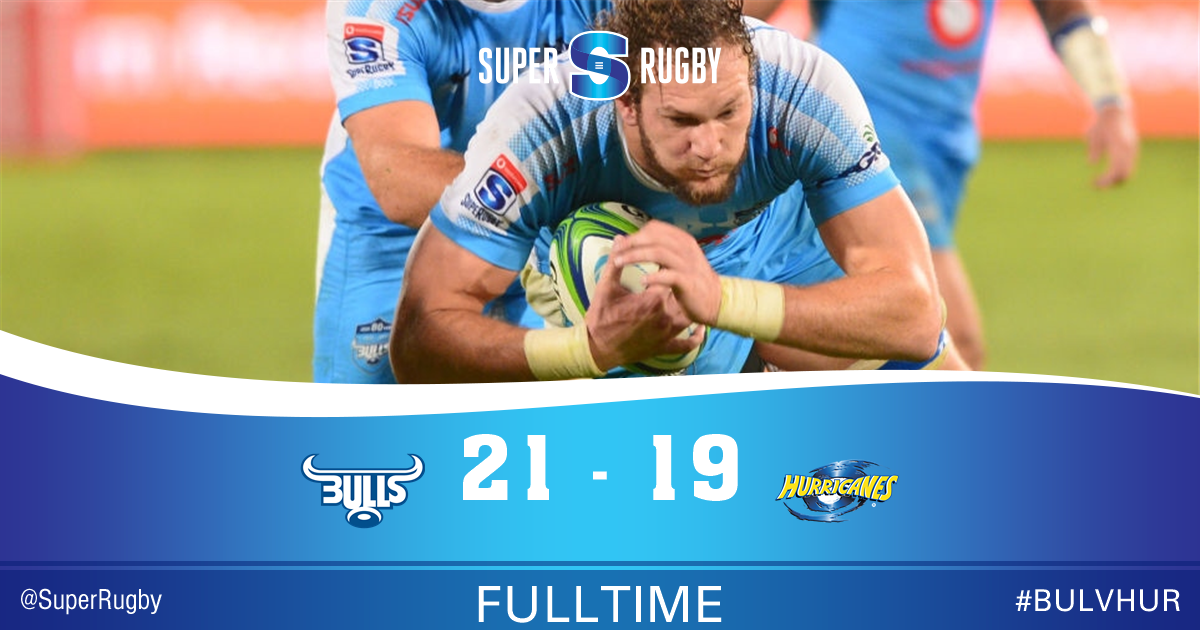 Nevertheless, the Pretorians rallied on and RG Snyman thought he had scored their second try in the 28th minute when he crashed over from close range. However, it was disallowed by TMO Marius Jonker for what he controversially ruled as a knock-on in the build-up.

Fortunately for Snyman, he was heavily involved when the try finally came five minutes later. His fantastic outside pass found lock partner Lood de Jager on the left. De Jager went over in the corner despite the best attempts of TJ Perenara to stop him.

The Bulls extended their lead on the stroke of half-time, when Pollard slotted over his second penalty after Vince Aso was blown up for offside.

Perenara thought he had put the Hurricanes back in front when he stretched over the try-line eight minutes into the second half. However, referee Rasta Rasivhenge felt he had probably failed to control the ball in the grounding and Jonker could not find any compelling evidence to overturn his decision. The Bulls survived by a whisker.

The Hurricanes scrum-half's true golden moment was yet to come. His grubber set up Beauden Barrett to score in the 59th minute, just minutes after the two-time reigning World Player of the Year had entered the field.

Even then, the Bulls soldiered on. With just under 10 minutes on the clock, Pollard put them on the attack when he charged down a kick from Ihaia West. The Bulls put ball to boot and pinned the Hurricanes back before some strong counter-rucking led to them winning the ball. From there, they worked it to Schoeman on the right and the prop scored what proved to be the match-winning try.