The Highlanders and Bulls had to settle for a 24-24 draw in their Super Rugby encounter at the Forsyth Barr Stadium in Dunedin on Friday.

The match was played at a fast pace throughout, with the Highlanders outscoring their opponents by four tries to three. Outside backs Josh McKay and Waisake Naholo crossed for a brace apiece and Josh Ioane added two conversions.

For the Bulls, Divan Rossouw, Jason Jenkins and Jaco Visagie scored tries and Handre Pollard succeeded with three conversions and a penalty.

The opening exchanges were evenly contested with the teams giving the ball plenty of air, although both sides also committed several unforced errors during the same period.

The home side held a slight edge, however, and took the lead in the 12th minute courtesy of McKay’s first try. This, after Dylan Sage spilled a kick from Aaron Smith close to his try-line and McKay pounced on the loose ball to score an easy five-pointer.

The Bulls’ responded shortly afterwards when Jenkins crossed the whitewash, but his effort was disallowed after television replays revealed a knock-on from Schalk Brits in the build-up.

That proved costly as the Highlanders went on to dominate the next 20 minutes, extending their lead in the 22nd minute when Naholo scored their second try after gathering a cross-field kick from Rob Thompson.

Ioane failed to convert which meant the Highlanders were leading 12-0, but the visitors struck back in the 28th minute via Rossouw’s try.

The Highlanders regained the initiative, however, when McKay crossed the whitewash again five minutes later.

The topsy-turvy nature of the game continued when Jenkins powered his way over the try-line from close quarters in the 37th minute which meant the Highlanders led 19-14 at half-time.

The second half started brightly for the Highlanders and 15 minutes after the restart Naholo gathered a pass from Shannon Frizell before dotting down in the right-hand corner.

Ioane failed to convert before Pollard added a penalty in the 58th minute to narrow the gap to seven points.

The Bulls upped the ante on attack as the half progressed and were rewarded when Visagie ran onto a pass from Pollard deep inside Highlanders territory and crashed over in the 75th minute. Pollard added the extras which drew his side level at 24-24.

That set up a tense finish but neither side managed to score any points during the game’s closing stages and had to be content with a share of the spoils. 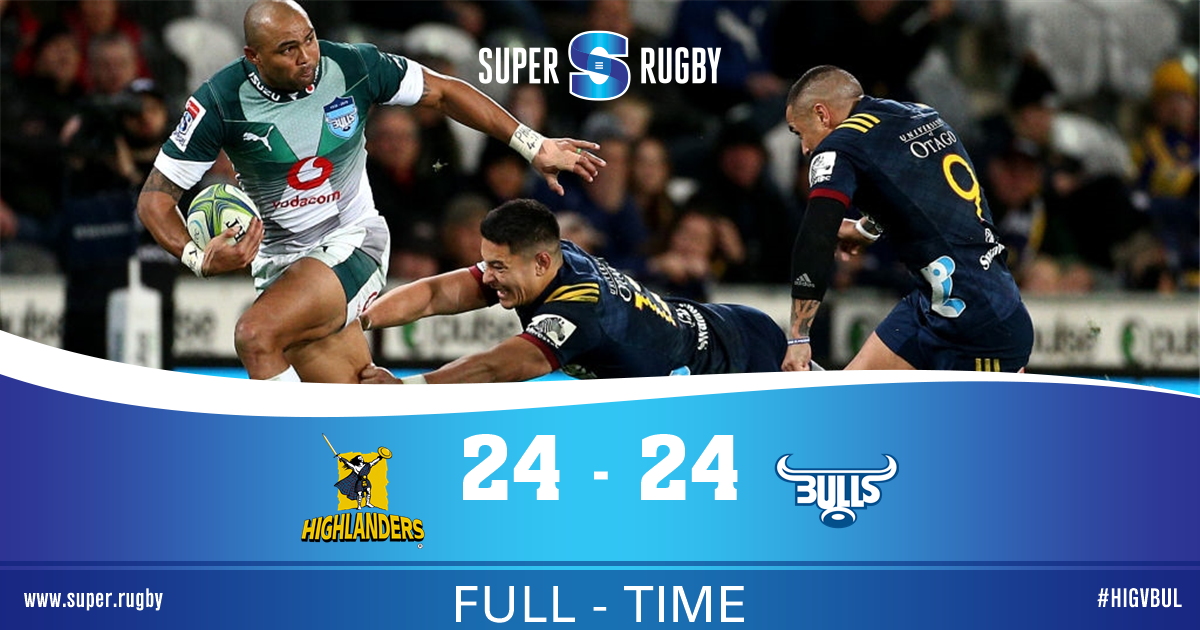