The Chiefs will be hunting for a peculiar slice of history this weekend when they travel to Eden Park to face the Blues, looking for what would be a 13th game without loss against the Auckland club. A win or draw for the Chiefs would see them break the Super Rugby record for the longest unbeaten run of any team against another in the competition’s history.

Currently, the Chiefs’ streak stands toe-to-toe with the Brumbies’ 12-game winning streak against the Reds from 2000 to 2010, a stretch in which the Brumbies conceded an average of just 13 points per game.

The Chiefs’ streak against the Blues includes a draw in their most recent meeting, but is still on the cusp of holding the record outright. It’s only the fifth time in Super Rugby history that any team has gone more than 10 matches in a row against a single opponent without losing.

The Chiefs are the second New Zealand team to make it to double-digits unbeaten against a single opposition, with Crusaders having picked up 11 consecutive wins against both the Reds and the Waratahs in the past. Not only have the Chiefs managed to pile on a record unbeaten streak against a single opponent, but they’re also the first team in Super Rugby history to go more than 10 consecutive games without defeat against a New Zealand opponent. 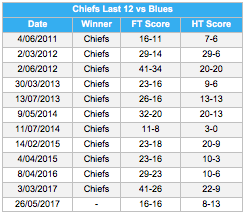 The Blues have rarely been too far away from victory in their current slump against the Chiefs, however. Prior to their 16-all draw in their last meeting, the Blues finished within losing bonus point territory of the Chiefs in four of their last five games against them.

The Chiefs have managed to keep the Blues quiet in the first half of games in their stretch, only once conceding more than 13 points in the opening stanza of a game against them in that time.

Indeed, they’ve kept the Blues to an average of just seven first-half points across their last six encounters.