The Hurricanes ran six tries past the Rebels in Melbourne to secure their fifth win of the season thanks to a 38-13 victory at AAMI Park.

Four tries in the first-half from Victor Vito, Cory Jane, Beauden Barrett and Jason Woodward put the Hurricanes in the driving seat, with scores after the break from Ardie Savea and Barrett rounding off a healthy win.

Picking up a bonus point by outscoring the Rebels six tries to two, the Hurricanes as a result leapfrog defending champions the Highlanders and move up into third place in the New Zealand Conference behind the Crusaders and Chiefs.

The Rebels' recent winning run would have given Tony McGahan's squad plenty of confidence, but none of those victories came against an outfit as composed as the Hurricanes, who are starting to find their best form.

Much like their one-sided 3-27 loss to the Highlanders at home a few weeks ago, for the Rebels this was a similar story.

Serious questions have to be asked regarding the state of the AAMI Park surface, which churned up instantly from the opening scrums to the point where groundsman snuck onto the field to replace it at any opportunity.

Australia host England here in June and if it can barely hold up from scrums at Super Rugby level, imagine the chaos in a Test match.

Adam Thomson looked to have handed the hosts a perfect start but his try was chalked off by the TMO, before a hint of fortune led to the opening score.

Julian Savea got caught in torn-up turf from a previous scrum, unable to chase back to cover a clever kick aimed for Dom Shipperley as the speedster finished in the corner.

Barrett's burst up the middle opened up the Rebels defence for the first time shortly after and Vito's good support line had the number eight over by the posts, with Barrett's conversion handing the Hurricanes the lead.

A penalty from Reece Hodge swung the advantage on the scoreboard back the way of the Rebels but it was short-lived, as Woodward punished his old side.

The full-back's chip and chase over the top came off perfectly before his pass found Jane on his outside for an easy run-in on his 101st Super Rugby game.

Barrett then pounced for an interception score, his third try in three games, and a cross-field kick from the fly-half to Julian Savea had the Rebels defence scrambling before Woodward burrowed over from close range to put the Hurricanes in bonus point territory, up four tries to one by half-time at 26-8.

Errors from the Hurricanes and some resilient defence kept the visitors out in their hunt for more points after the break, eventually ending that drought through Ardie Savea - who showed some quick thinking by pouncing on loose ball at the back of the Rebels ruck by their try line.

Good last-ditch defence and work at the breakdown from the likes of Jordy Reid kept the Rebels from limiting the damage on the scoreboard - that was until Barrett's second try.

A handy ricochet from his grubber kick opened up a gap for Barrett to flick on the afterburners and the Rebels couldn't catch him, converting to make it 38-8 in the closing stages.

Cam Crawford's consolation score was the final change to the scoreboard, after a good run from Sefa Naivalu, but it was all too late for the Rebels. 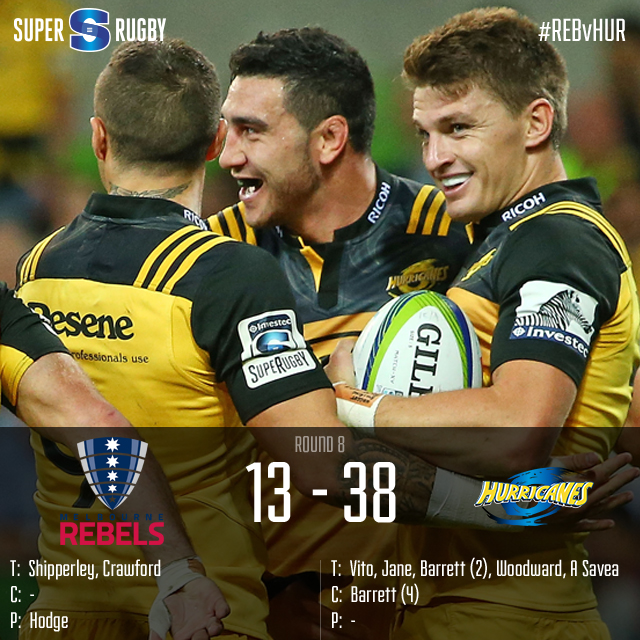