Cheetahs consign Stormers to another loss

The Cheetahs moved off the bottom of the Super Rugby overall standings on Saturday after claiming a bonus-point 35-22 victory against the Stormers.

Five tries were scored by the home side as the Stormers' woes continue in 2014, with this loss leaving them four points adrift at the base.

The Capetonians will now return to Newlands where they face the in-form Highlanders next week while the Cheetahs travel to the Bulls.

It was refreshing though to see two South African franchises attempting to run possession after the earlier performances of the Sharks and Bulls.

The Stormers, struggling for consistent form this term, offered much more than they had done in previous games, but ultimately came off second.

Young wing Devon Williams was the architect of the opening score of the game as his break down the left wing saw him eventually grubber on, with the recycled ball seeing flanker Nizaam Carr step and go in under the posts to allow fly-half Peter Grant the simple extras that made it a seven-point lead.

The Cheetahs responded however in the thirteenth minute as Willie le Roux put boot to ball cross-field and found Hennie Daniller for the simple try on the right wing. Elgar Watts was unsuccessful from the tee and also for the hosts' second that capped a two-minute spell.

Ryno Benjamin was that aforementioned scorer as a superb running line saw openside flanker Heinrich Brussow find a hole before drawing the final man for the inside centre.

Watts found his form in the 28th minute, however, as he landed a penalty from a morale-boosting scrum penalty, which the Cheetahs forwards made a point of celebrating loudly.

And their recovery would be rubber stamped five minutes later when that man Le Roux would spot a mismatch in defence, slipping through to create a ten-point advantage going into the changing rooms. It was a deserved lead due to the Cheetahs' willingness to run.

Grant did have the chance to cut the arrears three minutes into the second period but was off-target from the tee, as was Watts ten minutes later as the scores remained untouched.

However, the Cheetahs ten did find his range on 56 minutes and when Stormers centre Juan de Jongh had a try disallowed for obstruction, one sensed it was not going to be the visitors' day. The prospect of sitting rock bottom after eleven rounds was now likely.

That was until a fine break from captain Jean de Villiers led to wing Williams racing over to give the Stormers a glimmer of hope, with the scores now 23-15 on the hour mark.

More scores would follow too, two for the Cheetahs and one effort for the Stormers, as replacement duo Cornall Hendricks' long-range score was soon followed up by Trevor Nyakane crashing over, which meant De Villiers' last-ditch try would be scant consolation. 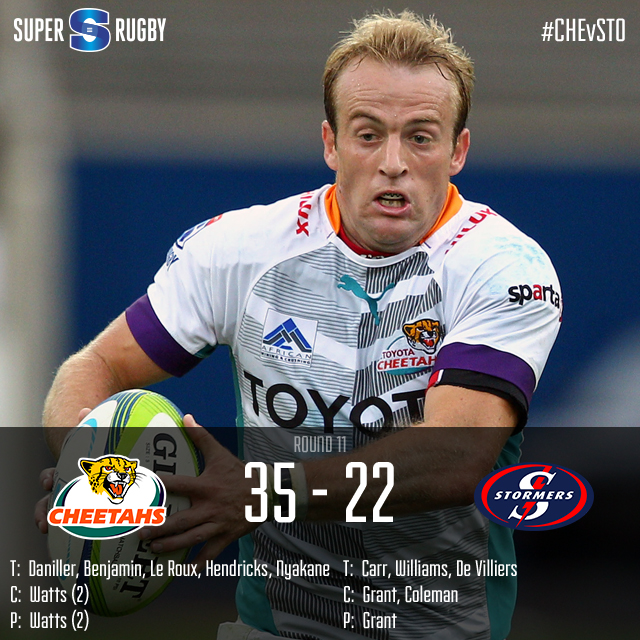