Cheetahs hold on for tight win over Bulls

The Cheetahs battled their way to a close-fought 19-17 win over the Bulls in their second round Vodacom Super Rugby Unlocked clash in Bloemfontein on Friday evening.

The home side led 13-3 at halftime and managed to hang on for their second successive win of the competition.

The Vodacom Bulls had a chance to level matters right at the end when Joe van Zyl (replacement hooker) crashed over for their only try from a lineout maul. However, Chris Smith (replacement flyhalf) missed the conversion attempt to allow the Free Staters to grab the winning points for a second week in a row.

The men from Pretoria had a first half to forget with too many errors, while the home team also made life difficult for their visitors with some bone crunching defensive hits.

The first half started with the two flyhalves, Tian Schoeman and Morne Steyn, exchanging successful penalty goals. However, just like last week in Pretoria against the Tafel Lager Griquas, it was the Vodacom Bulls who were slow off the mark.

The Toyota Cheetahs were rewarded with the only try of the opening half when former Blitzbok speedster Rosko Specman finished off a slick blackline move from a well-worked lineout.

The ball was moved through the hands of the Free Staters' backline, with Malcolm Jaer popping up on the other side of the field to create the extra man. That allowed for an easy run-in for Specman out wide.

Schoeman slotted the difficult conversion and was also on target with his second penalty goal of the evening, to hand the home team a well-deserved 13-3 halftime advantage.

After the break, Steyn hit the target with his second penalty goal of the match after a Toyota Cheetahs defender was pinned on the wrong side of a maul.

Schoeman emulated him five minutes later to stretch the home lead to 16-6. And barely three minutes later he capitalized on a Vodacom Bulls lineout transgression to stroke over his fourth penalty goal of the game, leaving the home team leading by 19-6 and time running out for the men from Pretoria.

To make matters worse for Jake White’s side, Ruan Nortje (lock) was yellow carded for a repeated offence.

However, Schoeman steered his penalty attempt past the uprights, and Steyn then narrowed the deficit to 10 points with his third penalty strike with the Toyota Cheetahs 19-9 in front.

Despite playing with one man less as a result of Nortje’s yellow card, it was actually the men from Pretoria who made most of the play and they were again rewarded for their efforts when Smith, on for Steyn, hit the mark with a beautiful long range penalty goal to edge the Vodacom Bulls to just a seven point deficit (19-12).

Van Zyl scored with less than four minutes left on the clock, but Smit’s failed conversion attempt handed a narrow win to the Free Staters.

Both teams lost key players early in the first half. Vodacom Bulls fullback Gio Aplon left the field after just five minutes of play with a knee injury and was replaced by Stedman Gans, the former Blitzboks star.

Toyota Cheetahs skipper Ruan Pienaar was helped off the field 10 minutes later with a knee injury from a Marco van Staden collision. The experienced former Springbok scrumhalf was replaced by Tian Meyer. 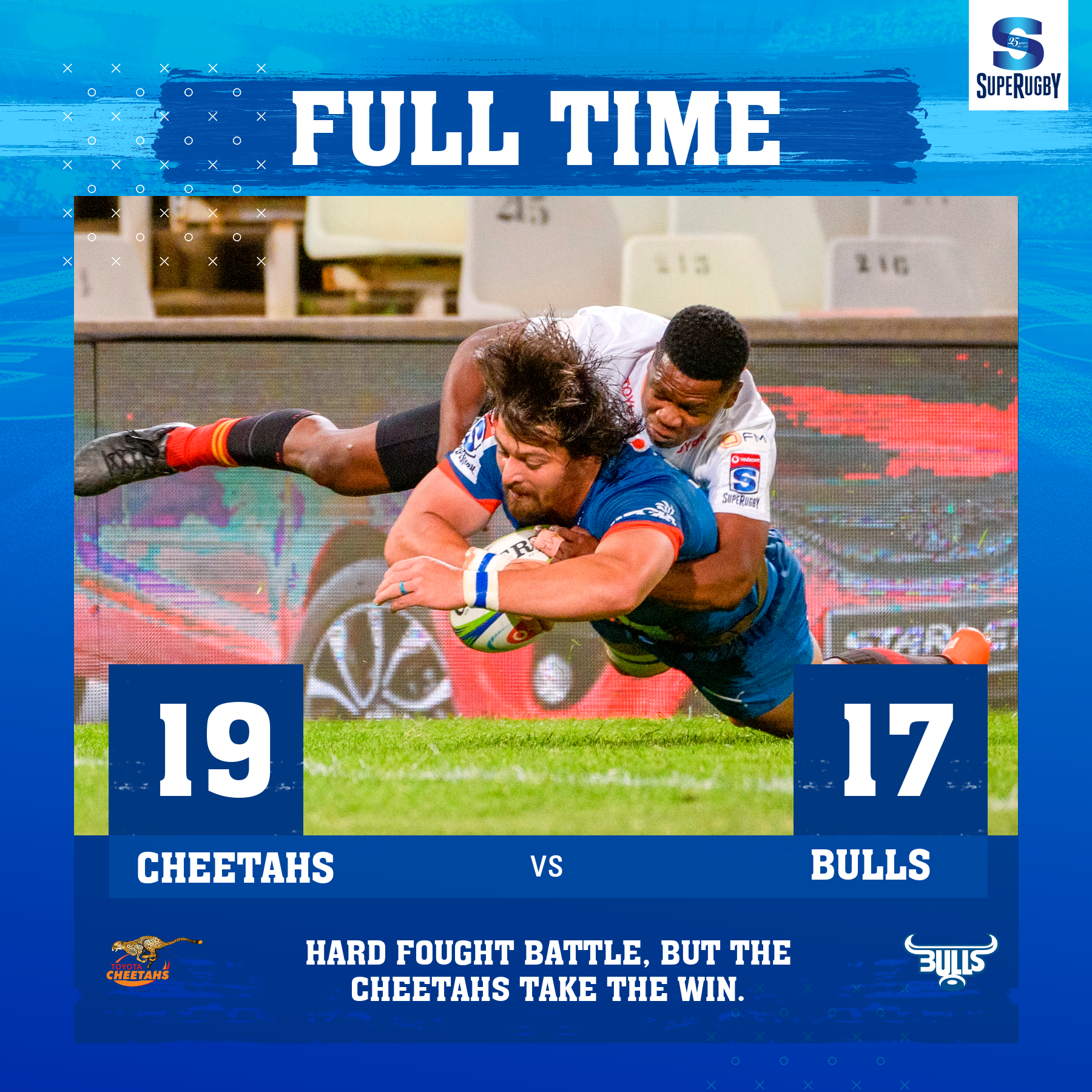