The Cheetahs brought the curtain down on Super Rugby Unlocked with a hard-fought 28-9 victory over the Griquas at a wet Toyota Stadium in Bloemfontein.

The result means that the Cheetahs finish fourth on the log with the winless Griquas finishing last.

The conditions did not make for particularly attractive rugby, but the home side ultimately made the most of their chances to come away with the bonus-point win.

The Griquas were competitive for most of the match, however, and the final scoreline probably flatters the Cheetahs somewhat.

The hosts got off to the best possible start when flanker Andisa Ntsila crossed for their first try with little more than three minutes on the board. Opting for an attacking line-out after earning a penalty deep in Griquas territory, the ball was moved to the blindside where Rosko Specman showed off his trademark Sevens skills to keep the ball in play before Ntsila grabbed hold of it and dotted down.

The conversion was missed, however, and it wasn't long before the visitors reduced the arrears when flyhalf Tinus de Beer converted after a penalty at the breakdown.

The hosts were soon back on the attack, with Specman in particular proving a handful, and they re-established their five-point lead within minutes after earning a penalty of their own, Tian Schoeman making no mistake this time.

A potential try looked on the cards for the Cheetahs shortly after thanks to more good work from Specman, but Howard Mnisi couldn't hold on to the livewire winger's pass in the midfield and the chance went begging.

Three minutes before half-time, the Griquas took the lead for the first time in the match when Schoeman nailed his third penalty after a Cheetahs player failed to roll away in the tackle.

The visitors were the first to go on the attack early in the second half, but the Cheetahs weathered the storm and were rewarded with their second try of the match in the 50th minute. Setting up a lineout on the Griquas five-metre line, a rolling maul very nearly took them all the way before the ball was moved out wide where Mnisi was waiting to score. The conversion was missed but the Cheetahs were back in front, 13-9.

Midway through the half, the Griquas were blown up for not releasing in the tackle inside their own 22, allowing Schoeman to take aim and extend the Cheetahs' lead to seven points.

The Griquas had a chance to return the favour at the other end within minutes after the Cheetahs were penalised for a side entry at the ruck, but they opted for a lineout and spilled the ball after several phases camped near the opposition tryline.

The Cheetahs effectively put the game to bed nine minutes from time with a try that emerged out of a comedy of errors. Clayton Blommetjies put through a grubber kick for Specman, and though he wasn't able to get control of the ball and dot down, several Griquas players also failed to deal with the danger on the ground, allowing Ruben de Haas to come from behind and snatch a gift of a try.

There was time for one more try to rub salt in the Griquas wounds, as quickly recycled ball from an attacking lineout allowed Jeandre Rudolph to run a great line and barge through the traffic to score. 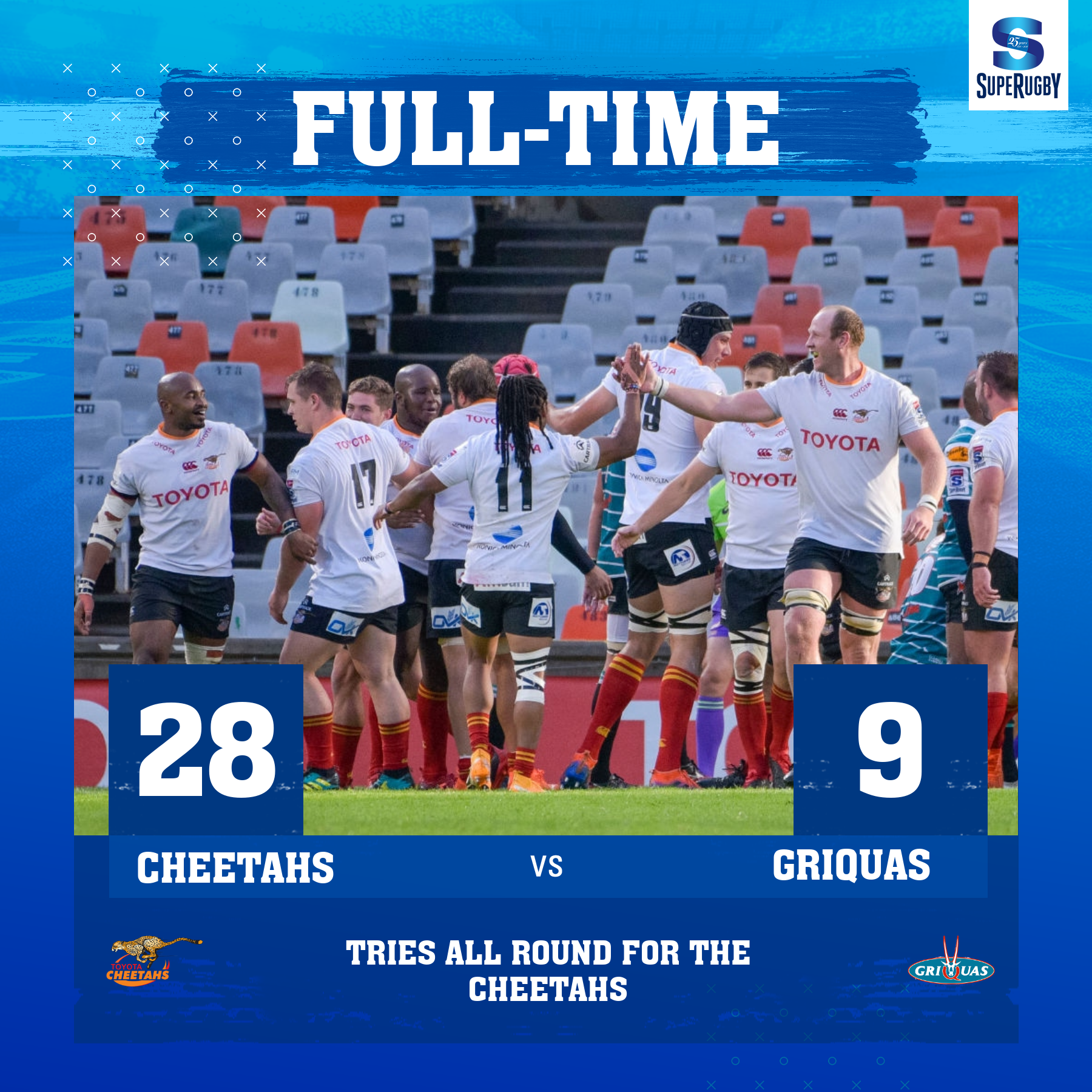