Damien McKenzie sealed a dramatic 26-23 victory for the Chiefs at the Forsyth Barr Stadium after nailing a long-range penalty in extra time.

In a see-saw battle in Dunedin, the Highlanders fought back from 10 points down to force the golden point finish before the Chiefs made the decisive play in extra time to snatch victory.

It's the third victory in the row for the Chiefs, who now find themselves in third place on the Super Rugby Aotearoa table, two points clear of the Highlanders and just two points behind the Blues in second.

Both teams started strongly and showed an immediate willingness to keep the ball in hand and run at the opposition. The Highlanders were given an early chance to take three when the Chiefs strayed offside, but Mitch Hunt couldn't find the target from right in front.

When the Chiefs earned a kickable penalty of their own from a tight angle, they opted for the attacking line-out, and after getting the go-forward ball they were looking for, a quick pass from captain Brad Weber to Etene Nanai-Seturo near the touchline allowed the winger to dive over in the corner and dot down in midair before McKenzie added the extras from out wide.

The Highlanders hit back with their opening try just minutes later as they scored from a set move that worked to perfection. From an attacking line-out in the Chiefs 22, they appeared to set up the rolling maul only for flanker James Lentjes to peel off and sell a dummy before running into a wide-open gap down the blindside for the score. Hunt couldn't add the extras, so the visitors stayed narrowly ahead.

The Chiefs nearly responded shortly after when big man Aidan Ross crashed over following another seemingly unstoppable assault on the Highlanders line, but the try was ruled out by the TMO who spotted a knock-on from Damien McKenzie during an aerial contest for an up-and-under several phases earlier.

The Highlanders were given a chance to take the lead when Hunt was offered another shot at goal, but the flyhalf wasn't having a good day at the office and missed the target for the third straight time.

The hosts were starting to do most of the running in the match but the Chiefs defence was proving equal to what was being thrown at them, leading to a bit of a stalemate on the pitch.

With time running out in the half, the Chiefs enjoyed a period of possession in Highlanders territory leading to two kickable penalties - both of which McKenzie missed.

Moments later, the Chiefs earned another penalty following a successful captain's referral for a high shot. This time, they went for the line-out up close, but again they were denied with the tryline beckoning when the Highlanders managed to poach a loose ball.

But the Highlanders couldn't escape their own area and gave yet away another penalty to turn over possession again, allowing McKenzie to find the target after a couple of missed efforts and extend his side's lead to five points at the break.

The Highlanders made a perfect start to the second half when Shannon Frizell ran a beautiful line to break through the Chiefs' defensive line before offloading to Aaron Smith who dove over in the corner for the try. Hunt still hadn't found his kicking boots, however, and missed his fourth shot to keep the scores tied at 10-10.

The Chiefs were given a chance to hit back immediately after the restart when the Highlanders were pinged for advancing ahead of the kick, and McKenzie slotted the penalty to put his side back in front.

A few minutes later, the Chiefs infringed inside their own territory to hand Hunt another shot at goal, and after missing four straight, the flyhalf gave a wry smile as his fifth effort of the night finally sailed inside the uprights to level the scores once more.

When the Highlanders offered McKenzie another shot at goal shortly after, the fullback gratefully accepted to restore the Chiefs' lead, as the hosts continued to give away points just after scoring some of their own.

The Chiefs delivered a potentially killer blow on the hour mark as some smart passing and strong running saw them cut through the midfield before crashing over for the try via Angus Ta'avao. McKenzie added the extras as the visitors suddenly found themselves leading by 10 points.

With just over 10 minutes to go, the Highlanders handed themselves a lifeline when they were awarded a penalty and set up an attacking line-out up close. A rolling maul took them towards the line before the ball was recycled quickly, allowing substitute Josh Ioane to sail through a gap and crash over for the score before converting his own try to reduce the deficit to just three.

That try seemed to light a fire under the Highlanders, who soon found themselves back in Chiefs territory piling on the pressure. When they earned a penalty right in front, they took the points on offer to square it up with three minutes to go.

Back came the Chiefs at the Highlanders, though, stringing several phases together before teeing up McKenzie for the potential drop-goal winner, but while his kick looked good, it sailed just wide.

The Chiefs regained possession from the 22 drop out and earned another penalty advantage near the halfway line just as the siren sounded, giving McKenzie one more chance to snatch the victory, but the fullback's kick was wide again as it was left to a golden point extra-time finish to decide the contest, with the first team to score taking the win.

Two minutes into extra time, an unfortunate error at the lineout saw the Chiefs hand over possession to the Highlanders into their own 22. Josh Ioane lined up a dropkick, but it didn't have the direction.

Instead, it was the Chiefs who earned a penalty from the restart after a great steal from Anton Lienert-Brown at the breakdown, giving McKenzie another opportunity to snatch victory from the kicking tee, and this time the fullback slotted the kick from near the halfway line to hand the Chiefs a thrilling victory. 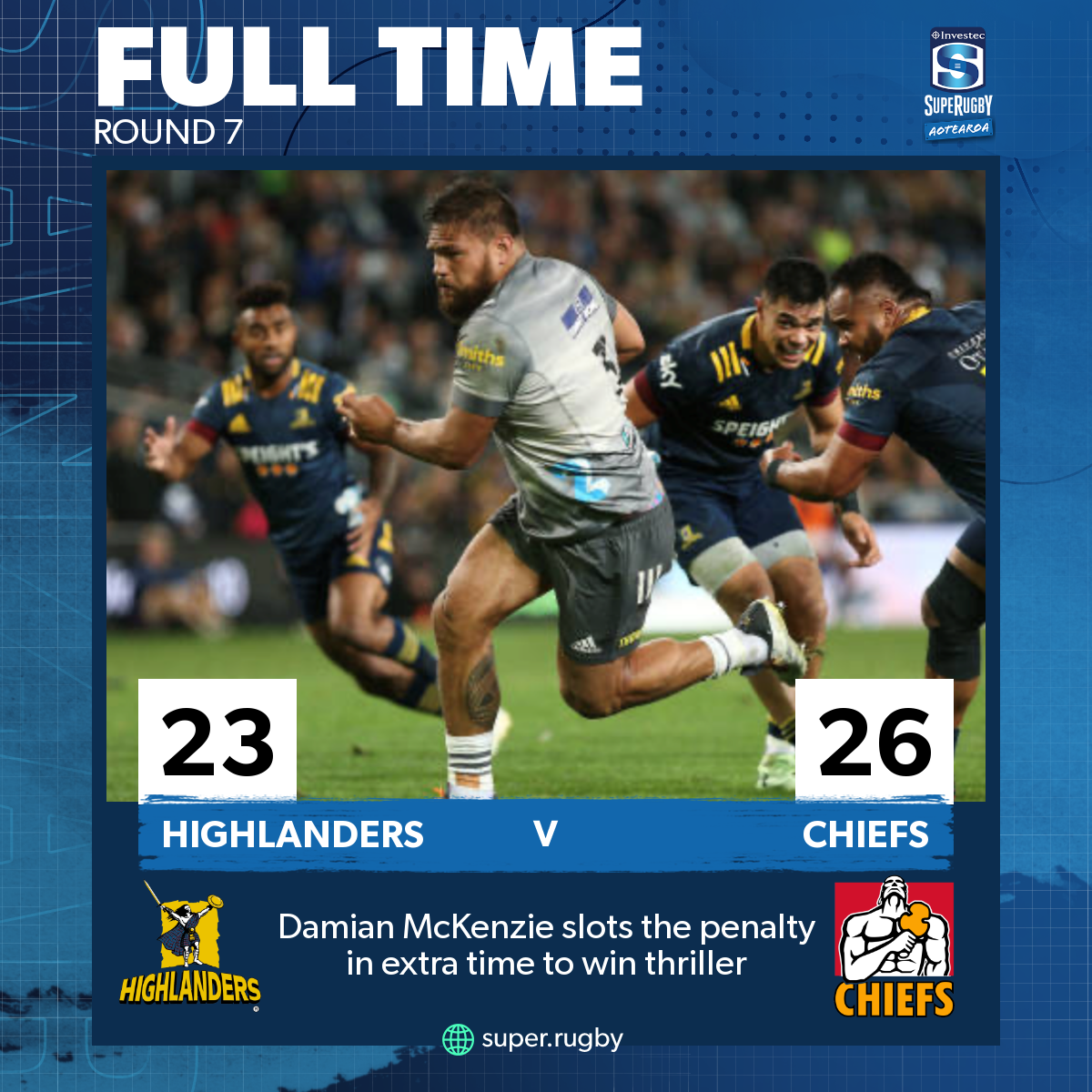