Chiefs Blown Away By The Hurricanes

Jordie Barrett was the star of the show as the Hurricanes secured a dominant 47-19 win over the Chiefs at Westpac Stadium in Super Rugby on Saturday.

The ‘Canes were excellent in the opening quarter and deservedly crossed the whitewash three times via Kane Leaupepe and Barrett’s brace.

Colin Cooper’s side hit back, however, and got themselves back in the contest through Luke Jacobson and Ataata Moeakiola, but TJ Perenara, Wes Goosen, Ardie Savea and Salesi Rayasi secured the win for the hosts, despite Lachlan Boshier’s effort.

It keeps them within touching distance of conference leaders Crusaders, who were too good for the Lions on Friday, while the Chiefs remain bottom in the New Zealand group after their sixth defeat of the season.

Despite their position in the standings, the ‘Canes have not been at their fluent best in 2019. Jordie Barrett’s form has rather encapsulated their frustrations, with the talented playmaker not quite rediscovering the performances he displayed in 2017 but, playing in his best position, the full-back thrived on Saturday and helped the Wellington outfit into a comfortable lead early on.

John Plumtree’s men started outstandingly and regularly cut a porous Chiefs rearguard apart, touching down twice in the opening 10 minutes. Both were poor from the visitors’ perspective, but they still needed finishing and Barrett did so with aplomb.

For the first, Asafo Aumua sent the 22-year-old through a gaping hole close to the ruck, before the full-back benefited from the space out wide. The away side’s chase following a clearance kick was abysmal and the nine-time capped All Black produced a neat outside break to touch down for a 14-0 lead.

That soon become a 21-point buffer when another excellent move saw Leaupepe cross the whitewash and at that stage a rout appeared inevitable but, to the Chiefs’ credit, they responded excellently and reduced the arrears with two tries quick succession.

Cooper’s charges held onto the ball well, causing a number of problems for the ‘Canes, and they were rewarded with a couple of close-range efforts from Jacobson and Moeakiola.

All of a sudden, the Chiefs had the momentum but that quickly dissipated as Perenara finished brilliantly for a 28-12 advantage at the interval.

Although the half-time break seemed to revitalise the visitors, leading to Boshier touching down, the Hurricanes simply regrouped and took the game out of their rivals’ reach. Firstly, Goosen continued his fine individual form by rounding the final defender to score before Perenara and Barrett combined to send Savea across the line for an outstanding counter-attacking try.

Plumtree’s men were comfortable but they needed to rubberstamp the bonus-point in the latter stages and they did so seven minutes from time when Rayasi scampered over to complete a fine performance. 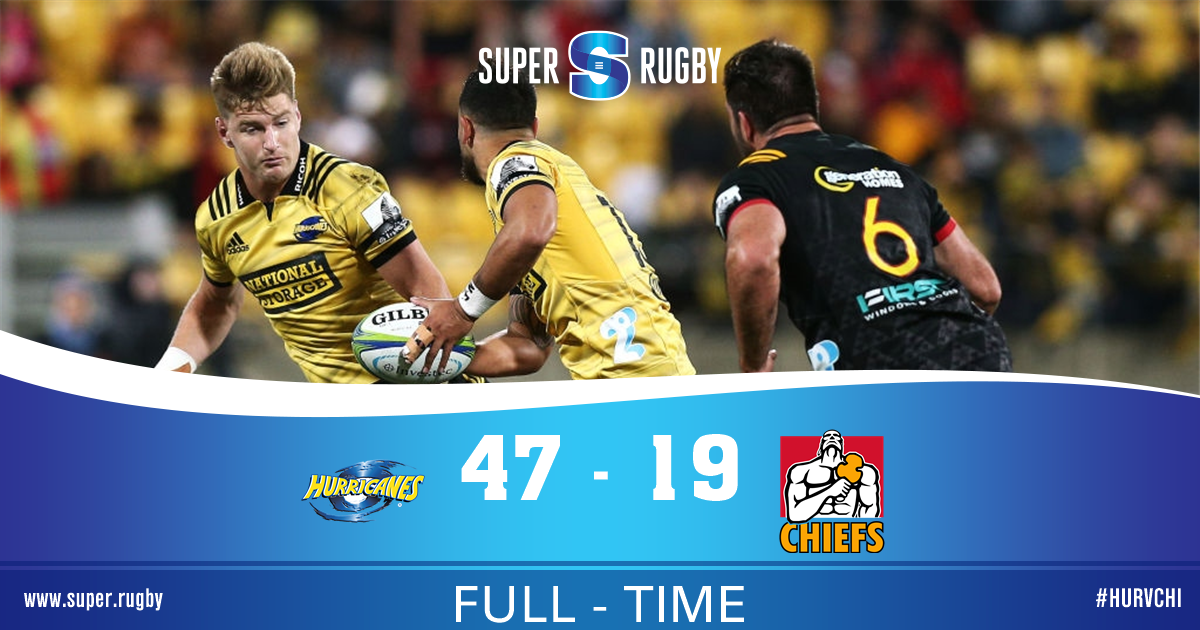