Chiefs come from behind to beat the Blues

The Chiefs got their 2020 Super Rugby campaign off to the perfect start as they came from behind to beat the Blues 37-29 in Auckland on Friday.

In a fast-paced and hotly-contested encounter, momentum between the two sides ebbed and flowed throughout, but despite being on the back foot during the first half, the Chiefs launched a great fightback in the second period to secure the result.

Tries from Samisoni Taukei’aho (2), Pita Sowakula, Aidan Ross and Solomon Alaimalo got the job done for the Chiefs while Aaron Cruden finished with a 12-point haul courtesy of three conversions, a penalty and a drop goal.

For the Blues, Rieko Ioane led way with a brace of tries and Tony Lamborn and Karl Tu’inukuafe also scored five-pointers. Their other points came via three conversions from Stephen Perofeta and a penalty from Harry Plummer.

The home side were fastest out of the blocks and after dominating the early exchanges they took the lead in the 17th minute courtesy of a well-taken try from USA international Lamborn. This, after TJ Faiane laid the groundwork with a telling break before he offloaded to Lamborn, who shrugged off a couple of defenders on his way over the try-line.

Faiane turned provider again 10 minutes later when he threw an inside pass to Ioane inside the Chiefs 22 and the All Blacks wing showed great determination and leg drive before crossing for his side’s second try.

Five minutes before half-time, the Chiefs opened their account when Taukei’aho scored off a lineout drive deep inside Blues territory, but that did not deter the hosts, who struck back with Ioane’s second five-pointer on the stroke of half-time.

The Blues were camped close to the Chiefs’ try-line before Jonathan Ruru got a pass off to the on-rushing Ioane, who burst through a tackle before crashing over under the posts. Perofeta added the extras to give his side a 19-5 lead at half-time.

The Chiefs needed a response and their head coach, Warren Gatland, rung the changes during the interval. Gatland made five alterations in all and amongst those replacements were experienced All Blacks inside backs Cruden and Anton Lienert-Brown, who sparked an immediate improvement in the Chiefs attack.

Shortly after the restart, another lineout drive close to the Blues try-line resulted in Taukei’aho going over for his second try. The visitors continued to dominate and were level by the 51st minute when Sowakula barged over from close quarters.

The Blues did not panic, however, and regained their lead when Tu’inukuafe dotted down after a pick-up-and-go close to his opponents’ line.

That would be the last time the home side would cross the whitewash, however, as the Chiefs finished stronger. Tries from Ross and Alaimalo put the visitors back in front before Cruden landed a drop goal in the 75th minute.

Plummer slotted a penalty shortly afterward but Cruden cancelled that out when he added a three-pointer of his own just before full-time to put the game beyond the home side. 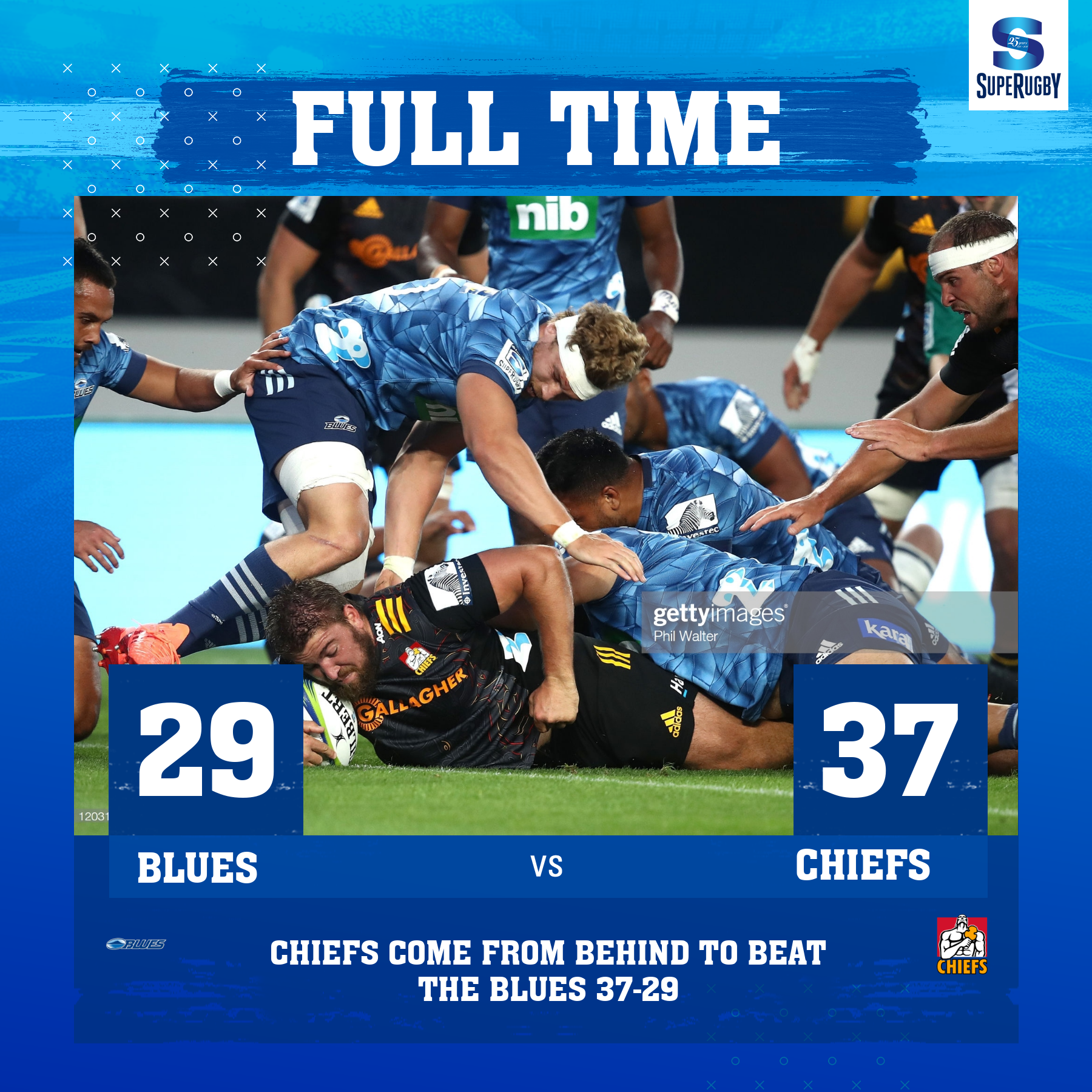