Chiefs come from behind to sink Crusaders in another Hamilton thriller

The Chiefs made it four wins in a row with a dramatic 26-25 victory over the Crusaders at the FMG Stadium, as Damien McKenzie's boot came up trumps once again.

It was another typically competitive and exciting Super Rugby Aotearoa encounter, with the lead changing hands on several occasions before McKenzie's 78th-minute penalty ultimately saw the Chiefs come away with the win - despite the Crusaders outscoring them three tries to two.

The victory lifts the Chiefs - once the whipping boys of Super Rugby Aotearoa - up to second on the table and in control of their own destiny in the competition, while the Crusaders remain on top despite suffering their second defeat in three games.

The visitors made the perfect start to the match when they strung together 11 phases to surge up to the Chiefs line and cross for the opening try.

With the try line beckoning, a pop pass to Leicester Fainga'anuku saw the powerful centre use all of his strength to shrug off one defender and crash over the line as the Crusaders opened up a 7-0 lead with just five minutes gone.

The Chiefs reduced the deficit shortly after when they were handed a penalty in Crusaders territory and Damian McKenzie succeeded with his first shot at goal.

And the hosts closed the gap further not long after when a rare mistake from Richie Mo'unga saw the Crusaders flyhalf stray offside, allowing McKenzie to step up to convert once more.

A great break from Will Jordan nearly saw the Crusaders go over for their second try, but Chiefs captain Brad Weber thought he saw some obstruction during Jordan's run, and his captain's referral was vindicated when the TMO confirmed his suspicions and handed the Chiefs a penalty.

The Crusaders' discipline continued to let them down, and when they handed McKenzie a third kickable penalty, he didn't need a second invitation to put the Chiefs in front.

When the Crusaders were given a chance to return the favour shortly after, Scott Barrett decided to take the points on offer, and from the restart, they surged back up the field for their second try.

Mo'unga created the opportunity with a step inside to draw in a couple of defenders before popping a quick pass to Barrett, who ran into a gap and offloaded to Jordan for the easy run-in. Mo'unga added the extras as the Crusaders, having trailed just minutes earlier, took a 17-9 lead into half-time.

The Chiefs started the second half by piling on the pressure on the Crusaders line but the home side's defence stood firm and repelled every assault.

Back came the Chiefs at the Crusaders a few minutes later, however, with Alex Nankivell making the initial break to get them into the danger zone, and this time they found the try they were looking for as Lachlan Boshier managed to dot the ball down amid a pile of bodies. McKenzie added the extras to bring the Chiefs back to within one.

Unfortunately for the Chiefs, an ill-judged pass shortly after the restart saw them carry the ball over the line and hand the Crusaders a five-metre scrum. That led to a penalty and an attacking line-out, with the rolling maul taking them to the line before Codie Taylor stretched over for the score. Mo'unga surprisingly hit the posts from right in front to limit the damage somewhat.

The Chiefs were looking more dangerous with the ball in hand now, and after another surge up the field, Anton Lienert-Brown sent a long, looping pass out wide to Jonah Lowe, who was able to go low and slide into the corner. McKenzie nailed a tough kick from near the touchline as the Chiefs retook the lead.

A poor touch finder following the restart put the Chiefs under instant pressure, however, and when the Crusaders were handed a penalty, they decided to take the points on offer to go back in front.

With four minutes to play, the Crusaders handed the Chiefs another chance to retake the lead when they strayed offside, and after taking his time, McKenzie made no mistake from 35 metres out.

The Chiefs chose not to try and keep the ball in hand from the restart, handing the Crusaders possession with a kick into touch, but with the pressure on and the visitors on attack inside their 22, the Chiefs pulled off an absolutely crucial turnover at the breakdown to regain the ball.

That led to a last-ditch captain's referral from Crusaders skipper Barrett who thought he spotted some foul play at the breakdown, but the TMO didn't agree and the referee's on-field decision stayed, as the Chiefs hung on for their fourth win on the trot to underline their title credentials. 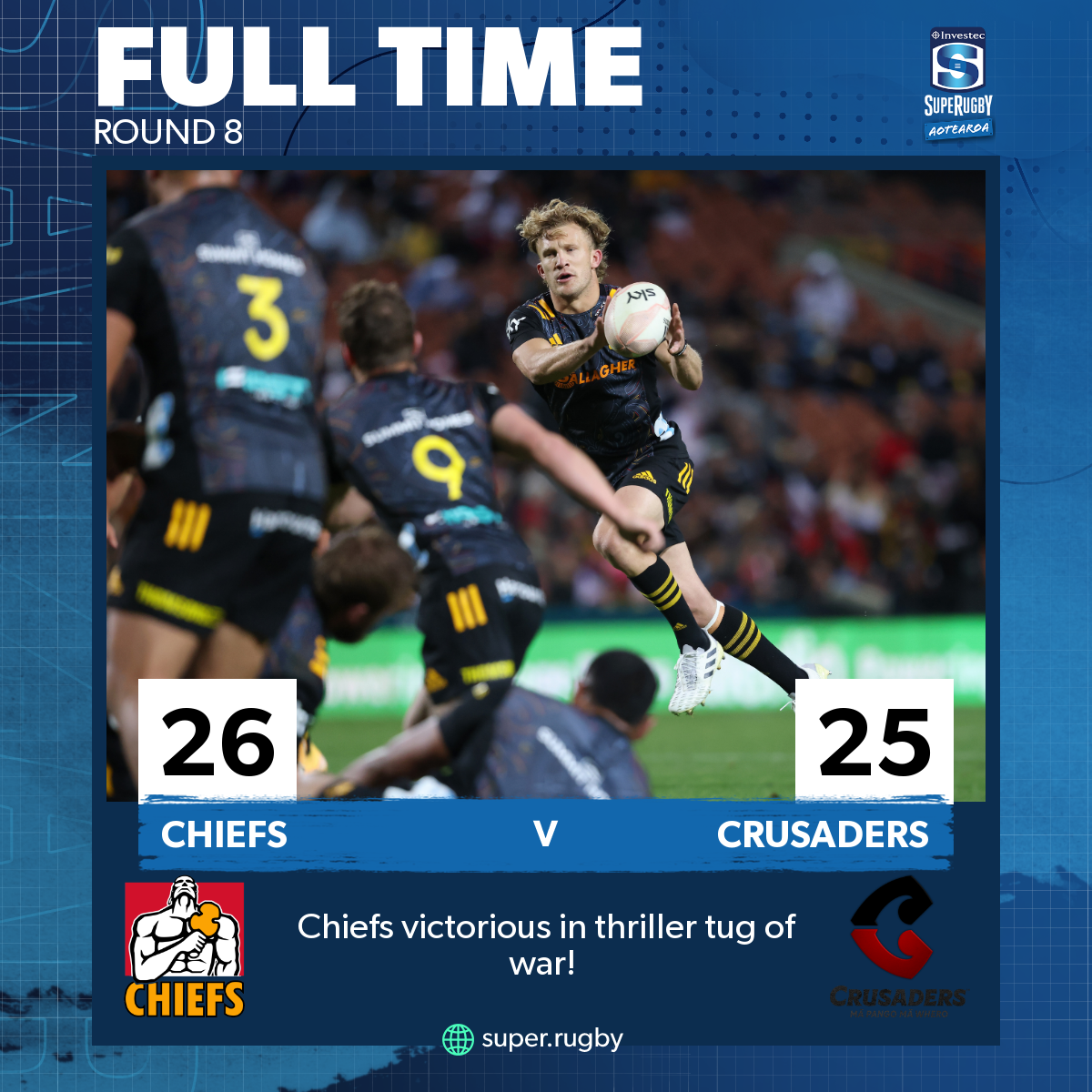