The Lions secured a hard fought 23-17 win over the Chiefs in Hamilton on Friday to get their 2019 Super Rugby campaign back on track.

As the scoreline suggests, this was a closely contested match although the Lions were the dominant side during the opening half and raced into a 20-0 lead at half-time before the Chiefs fought back in the second stanza.

In the end, the Chiefs outscored the victors by three tries although brilliant goalkicking from Elton Jantjies proved the difference between the sides in the end as he contributed 13 points via two penalties, two conversions and a drop goal. Their other points came courtesy of tries from Carlu Sadie and Aphiwe Dyantyi.

The visitors’ forwards also deserve praise as they delivered a dominant display especially in the tight exchanges which laid the platform to a deserved triumph.

The Lions were dealt a blow ahead of the match with the news that they would be without the services of their head coach, Swys de Bruin, who flew back to South Africa hours before kick off for personal reasons.

But De Bruin’s absence did not seem to affect the men from Johannesburg during the early stages of the game and they opened the scoring in the 10th minute via a penalty from Jantjies.

The next 20 minutes was characterised by plenty of end-to-end action but no points were scored during this period. The Lions eventually extended their lead on the half-hour mark courtesy of another penalty from Jantjies.

Five minutes later, the visitors took the ball through several phases after a lineout deep inside Chiefs territory, before Sadie crossed for the opening try from close quarters.

And just before half-time Warren Whiteley stabbed a grubber kick through which Dyantyi gathered before diving over for his a deserved try which Jantjies converted and the Lions had their tails up at the break.

The Chiefs needed a response but they had to wait until midway through the second half when Sean Wainui scored their opening try after a brilliant run from Brad Weber in the build-up.

That score seemed to reinvigorate the home side as shortly afterwards Wainui launched a superb attacks from inside his half which was rounded off by Laulala.

Marty McKenzie failed with both conversion attempts but he made up for those misses when he launched a teasing crossfield kick which was gathered by Alex Nankivell, who offloaded to Manu in the build-up to the Chiefs’ third try.

McKenzie added the extras which narrowed the gap to three points but Jantjies sealed his side’s win when he landed his drop goal in the game’s dying moments. 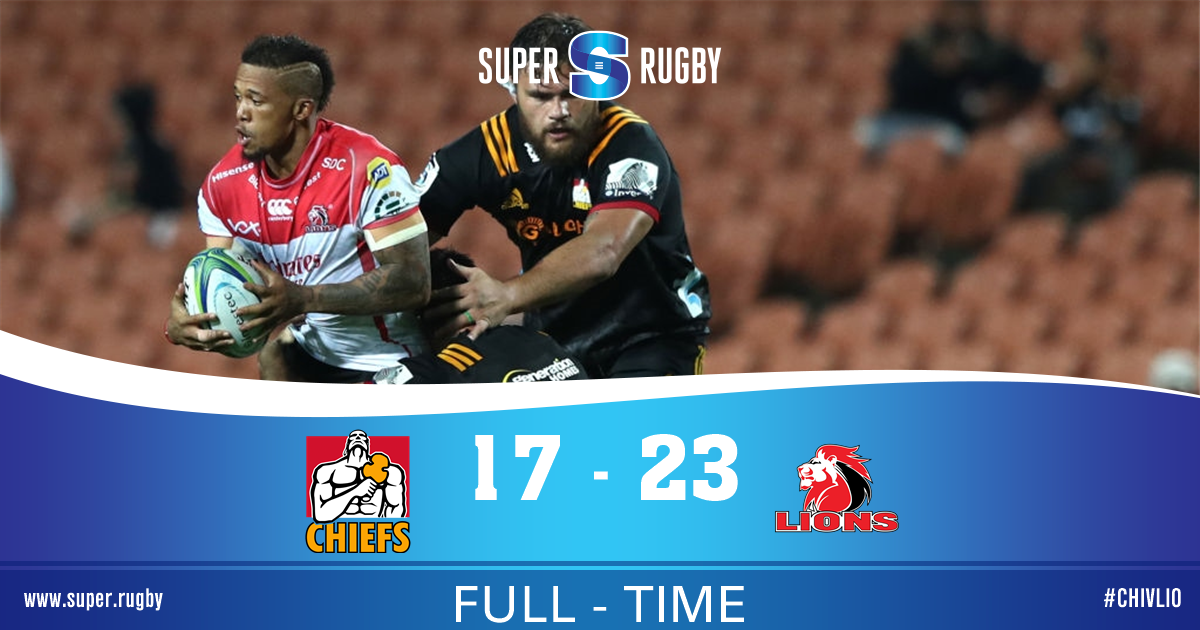