The Chiefs scored 24 unanswered first-half points to secure a 36-12 bonus-point victory over the Reds at Suncorp Stadium in Brisbane.

The Chiefs move above the Highlanders in to third position in the New Zealand conference while the Reds remain in fourth place on the Australian Conference standings.

The first half was a completely one-sided affair with the Chiefs scoring 24 unanswered points as Tyler Ardron, Charlie Ngatai and Brodie Retallick dotted down for the visitors.

The second half was a bit more of a contest as the Reds showed some fight, Samu Kerevi chipping in with a brace. However, it was still a convincing win for the men from Hamilton as they came back in the end to grab that crucial bonus-point, which could make a big difference to their campaign.

The Chiefs grabbed the early lead with six minutes on the clock, courtesy of a well-struck Damian McKenzie penalty from 40 metres out, after the Reds were caught offside.

The Chiefs enjoyed 80 percent of possession in the opening exchanges and were rewarded with the first try of the match when Ardron burst over after a series of powerful carries from his fellow forwards. It all came from the decision to kick for the corner and set up the lineout driving maul. McKenzie's penalty made it a 10-0 lead with 13 minutes gone.

It didn't take long before the Chiefs were camped deep in Reds' territory again as they continued to string the phases together and heap pressure on the home side. With seemingly no way through, it took a little bit of ingenuity with the delayed pass from McKenzie to unlock the Reds' defence and set Ngatai through the gap and over the whitewash for the score.

Next it was time for Retallick to showcase his power from close range, burrowing over three phases after a Chiefs' attacking scrum five metres out. Because Damian McKenzie had failed an HIA on 20 minutes, Marty McKenzie converted for a 24-0 lead.

The line speed in defence from the Chiefs was preventing the Reds from gaining any real front-foot momentum and meant they remained scoreless as the sides went in to the interval.

Soon after the break, Chiefs hooker Liam Polwart got himself on the scoresheet when the Chiefs had the advantage as they looked to build after the lineout. Alamailo played the final pass for Polwart, who beat the defender to dot down as the lead was stretched to 31-0.

The Reds eventually got on the board in the 47th minute when Samu Kerevi scythed through from close range. After a series of phases close to the Chiefs' try-line, Matt Lucas swung the ball to the blindside for Kerevi, who profited on a two-on-one situation with Izaia Perese on his outside to sneak through a gap and over the whitewash.

Kerevi produced a piece of individual brilliance to break through the Chiefs' defence to grab his brace and his side's second to make it 31-12 with five minutes to go.

The Chiefs would have the last laugh and cap off a fine overall performance when substitute hooker Samisoni Taukei’aho went over at the back of a driving maul to claim the much sought after bonus point. 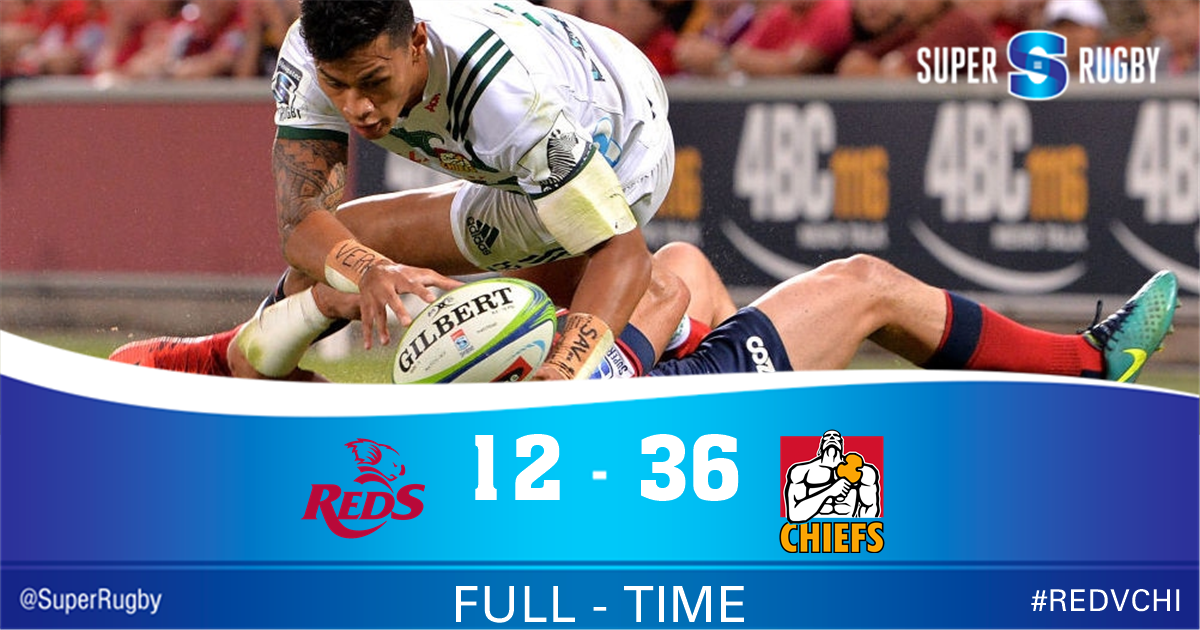