Chiefs Hold By A Thread For Epic Win Over Reds

The Chiefs put in over 200 tackles in a huge defensive effort to edge the Reds 19-13 in Hamilton in Friday’s Super Rugby action.

The visitors were quick out of the blocks, getting over the line twice in the opening six minutes, with both tries being disallowed by TMO Glenn Newman. The second was a monumental effort from the Reds, who took the ball through 19 phases before winger Etene Nanai-Seturo dotted down in the corner, but Newman found a knock-on earlier in the movement.

Having survived the early onslaught, the Chiefs would open the scoring with a slick move that saw Marty McKenzie feed eighth-man Pita Sowakula, who scored the five points.

While the Reds got some points on the board via the boot of fly-half Bryce Hegarty, the hosts extended their lead with a try via prop Atunaisa Moli. The Chiefs took it through the phases and talismanic captain Sam Cane got close before quick hands saw Moli crash over.

The see-saw nature of the match continued as the Reds smashed their way to the Chiefs’ line, where Cane proved his worth once again by winning a turnover. They remained under siege and the Reds would cross the whitewash, only for it to be ruled a double movement.

Needing points, Hegarty kicked another penalty, but the Chiefs struck back on the half-time buzzer with a try in the left corner from Nanai-Seturo to take the lead to 19-6 at the break.

But that was the last bit of attacking from the former Super Rugby champions.

The Reds kept the ball well and played much of the second half in Chiefs territory, finally being rewarded in the 55th minute. It wasn’t pretty, but it was effective as prop Taniela Tupou went over after 20 phases. The subsequent conversion left them trailing 19-13.

From then on, it was a monumental defensive effort from the Chiefs, spurred on by the cowbell-ringing Waikato faithful. The Reds were once again camped in the Chiefs’ 22m and took the ball through multiple 15+ phases but each time the Chiefs would thwart the attack and clear the lines.

The Reds got over the line once more as the full-time hooter sounded, but more epic defence saw the Chiefs make their 238th tackle and hold the ball up, cuing referee Angus Gardner to blow the final whistle. 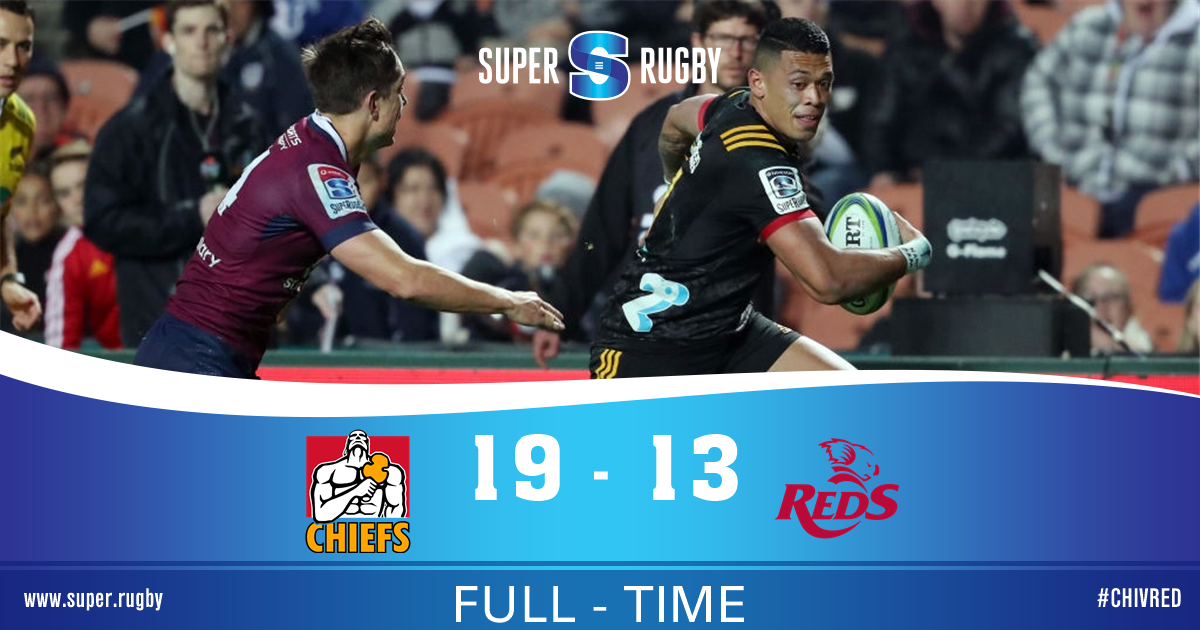