The Chiefs continued with their impressive recent form when they claimed a deserved 27-22 victory over the Highlanders in Hamilton on Friday.

In a typical New Zealand derby, filled with lots of thrilling action, the Chiefs dominated for large periods but the Highlanders delivered a plucky performance and both sides eventually scored three tries apiece.

The win means the Chiefs are provisionally top of the New Zealand Conference table although that situation could change if the Hurricanes and Crusaders win their matches later this weekend.

The Chiefs did most of the early attacking although the Highlanders were dealt a massive blow in the seventh minute when star fly-half Lima Sopoaga limped off the field with a foot injury.

The home side eventually took the lead in the 11th minute courtesy of a Damian McKenzie penalty, after the Highlanders' backline strayed offside on defence, and he made it 6-0 when he added another three-pointer off the kicking tee midway through the half, after Josh Dickson was blown up for side-entry at a maul.

Three minutes later, the Highlanders opened their account when Rob Thompson launched a teasing crossfield kick which Waisake Naholo gathered inside the Chiefs' 22 before stepping past Solomon Alaimalo on his way over the try-line.

Fletcher Smith, who came on as Sopoaga's replacement, added the extras which meant the Highlanders led 7-6 despite spending large periods camped inside their half and having very little possession.

Despite trailing on the scoreboard, the Chiefs did not panic and just before half-time, they regained the lead in spectacular fashion. This, after McKenzie launched a delightful chip kick which Toni Pulu gathered close to the corner flag before throwing an inside pass to Alaimalo, who went over for his side's first try.

McKenzie slotted the conversion from close to the touchline which gave the hosts a 13-7 lead at the interval but they would pull further ahead four minutes into the second half when Nathan Harris crossed the whitewash from close quarters, after McKenzie was stopped close to the try-line in the build-up.

The conversion from McKenzie meant the Chiefs led 20-7 but the Highlanders struck back five minutes later when, after taking the ball through several phases inside their opponents' 22, Aaron Smith threw a long pass to Tevita Li, who dotted down.

On the hour-mark, Fletcher Smith added a penalty – after Liam Messam infringed at a ruck – which meant the Chiefs held a slender 20-15 lead although the Highlanders would soon take the lead again.

This, after an attempted clearance from McKenzie deep inside his half struck Lachlan Boshier and Ash Dixon did well to gather the loose ball before it was shifted to Paletasio Tomkinson, who went over for his side's third try.

Fletcher Smith made no mistake from the kicking tee which meant the Highlanders were now leading 22-20.

The Chiefs finished stronger though and sealed their win in the 69th minute when Sean Wainui rounded off a flowing move in the left-hand corner and although the Highlanders tried gallantly to regain the lead in the game's closing stages, they were kept at bay by a solid defensive effort from the Chiefs. 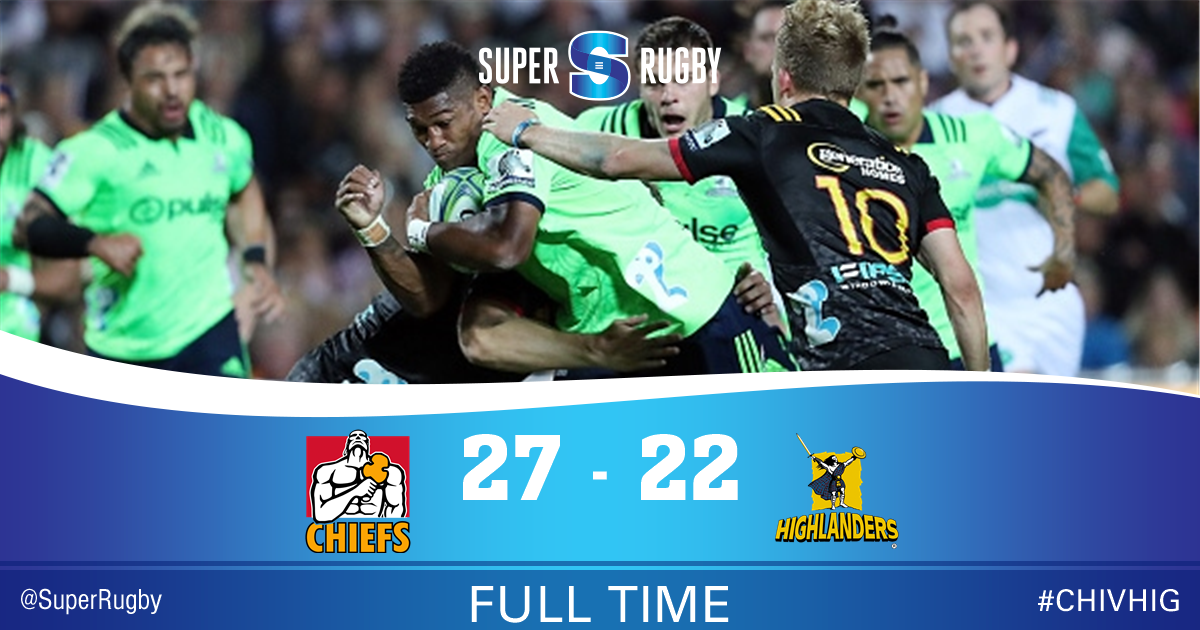