The Chiefs claimed their eighth successive win over Australian sides with a 39-27 victory over the Waratahs at Waikato Stadium in Hamilton on Saturday.

Tries from Brodie Retallick, Nathan Harris, and two apiece from Damian McKenzie and Toni Pulu proved too much for the Waratahs who scored through Cam Clark, Curtis Rona and Kurtley Beale.

The 'Tahs remain ahead of the Melbourne Rebels at the top of the Australian Conference, who closed the gap to just one point with victory over the Sunwolves.

Meanwhile, the Chiefs consolidate fifth position on the overall standings and remain well on course for the play-offs with their eighth victory of the season.

The Waratahs came away with tries on the first two occasions they got deep in to Chiefs' territory - both scores coming from well-worked set-plays.

The first was scored by Clark. It came from Chiefs fly-half McKenzie's forward pass. From the scrum, the 'Tahs executed a simple yet effective set-piece from left to right, drawing defenders with Beale the decoy runner, allowing Clark an easy run-in to the line on the overlap.

The second came as Chiefs loose forward Mitch Karpik was penalised for joining the ruck incorrectly. Foley kicked to the left-hand corner. From the lineout, the 'Tahs worked the set-play expertly, this time Clark the decoy runner with Rona breaking the line and beating the last defender with a wonderful step and superb finish to dot down on his 26th birthday.

In fact, the first time they built a substantial amount of phases - they were rewarded with a try. The hosts showed patience and kept building through ten phases before McKenzie's pop pass found Retallick who had run a good line to go in under the posts from close-range. McKenzie added the extras.

The Chiefs continued to apply pressure and the Waratahs were punished for trying to run the ball out from the back as the ball spilt loose. The Chiefs pounced on the loose ball and the ball was recycled to Liam Messam, who did excellent work in close quarters, getting the hands free in the tackle to offload for hooker Harris to crash over from close-range.

Soon afterwards, the Chiefs had the lead for the first time in the game. From a lineout on halfway, Charlie Ngatai made some good ground as first receiver. The ball was recycled with Anton-Lienert Brown producing an excellent offload for Pulu to break the line with speed before he also offloaded for McKenzie who just had the momentum to make it to the whitewash, despite the best attentions of Israel Folau. McKenzie's conversion gave the home side a 19-14 lead as the sides headed in to the interval.

Five minutes after the interval, Foley cut the deficit to just two with a penalty after the Chiefs were penalised for going offside.

But the Chiefs would extend their lead a couple of minutes later. After a patient build-up in which they went from right to left and back to the right, Pulu did great work in making the most out of McKenzie's bouncing pass to beat two defenders from a standing start to go over for his side's first try of the second half.

However, just moments later, the Waratahs got close with the driving maul before the ball was spread wide where Folau put Beale through a gap with a clever little reverse pass for the centre to have enough pace to dive over in the corner. Foley's conversion levelled matters on the scoreboard at 24-24 with 52 minutes gone on the clock.

The topsy-turvy nature of the match continued as the Chiefs scored next. Pulu showed his pace once again as he got to scrum-half Brad Weber's box-kick before Michael Wells to dot down and grab his brace.

A piece of individual brilliance from McKenzie after the hooter gave his side what could be a crucial bonus point while the Waratahs came away with nothing. 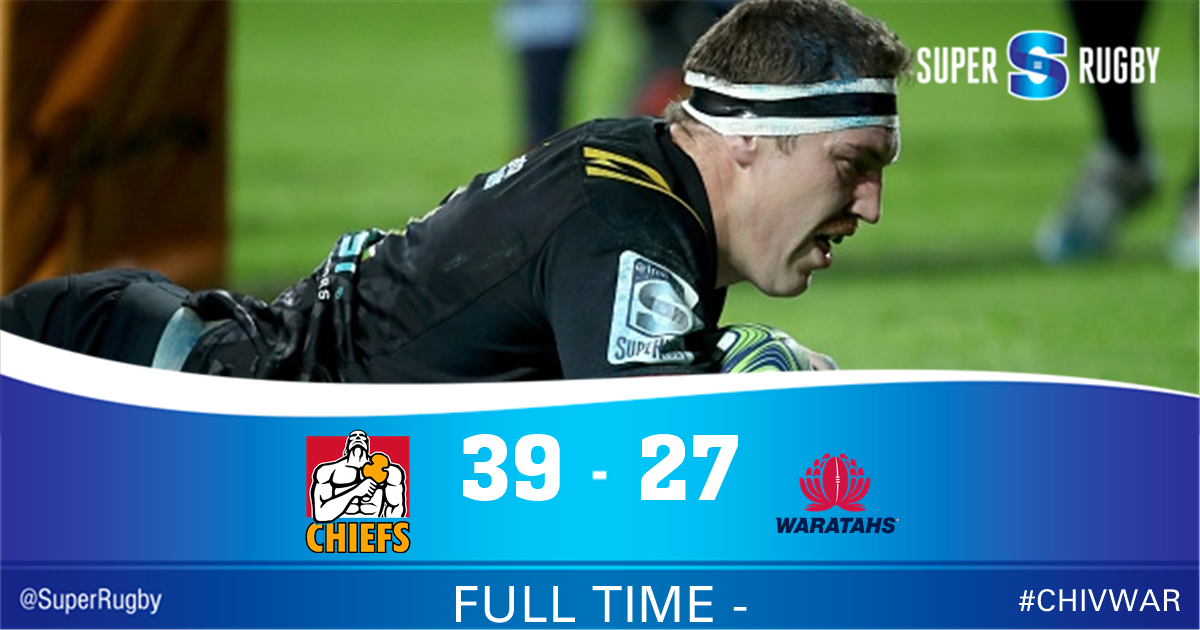