Chiefs hold on for nail-biting victory over the Western Force

Force flyhalf Domingo Miotti had the chance to clinch victory for the hosts with the last kick of the game but his conversion sailed agonisingly wide of the upright.

The Kiwi team though had to grind out the result the hard way as they played the last 14 minutes of the game with a man down after eighth man Luke Jacobson was shown a red card.

The Chiefs made the perfect start to the contest when centre Alex Nankivell went over for the first try of the game in the seventh minute after massive scrum pushover from the pack.

The visitors were dealt a triple blow five minutes from the halftime interval when Anton Lienert-Brown was given a yellow card after his team had been warned for repeated infringements close to the try-line.

The Force took full advantage and a powerful driving maul that the Chiefs stopped illegally saw a penalty try awarded and Jacobson shown a yellow card.

The Chiefs, playing with 13 men, took a three-point lead into the halftime break however as flyhalf Damian McKenzie slotted a penalty as the hooter went.

The visitors then did well not to concede any points early in the second half while still playing with two men down.

Force wing Jordan Olowofela was sent to the sin bin in the 53rd minute after a deliberate knock-down thwarted a Chiefs attack.

The Chiefs turned on the screws with a man advantage and scored two tries inside the space of five minutes.

Hooker Nathan Harris went over after a massive driving maul and then wing Jonah Lowe dived over in the left-hand corner after flank Pita Gus Sowakula broke the line and offloaded.

McKenzie missed both conversions but the Kiwi outfit held a commanding 20-7 lead with 15 minutes remaining.

The Force threw everything to get back into the contest and the pressure saw the Chiefs commit a number of infringements close to the try-line.

Jacobson paid the price as he was shown his second yellow card of the game, and consequently a red card, after he was adjudged to have slowed the ball down in a ruck.

The home team reduced the deficit on the scoreboard to six points with 10 minutes remaining after wing Richard Kahui went over against his old side and Miotti converted.

The Force then attacked with all they had as the clock ticked down and, following relentless pressure, Miotti dived over close to the left-hand corner after the hooter for fulltime had already sounded.

The Argentine however could not slot the conversion that would have given his team a dramatic win as the Chiefs breathed a huge sigh of relief. 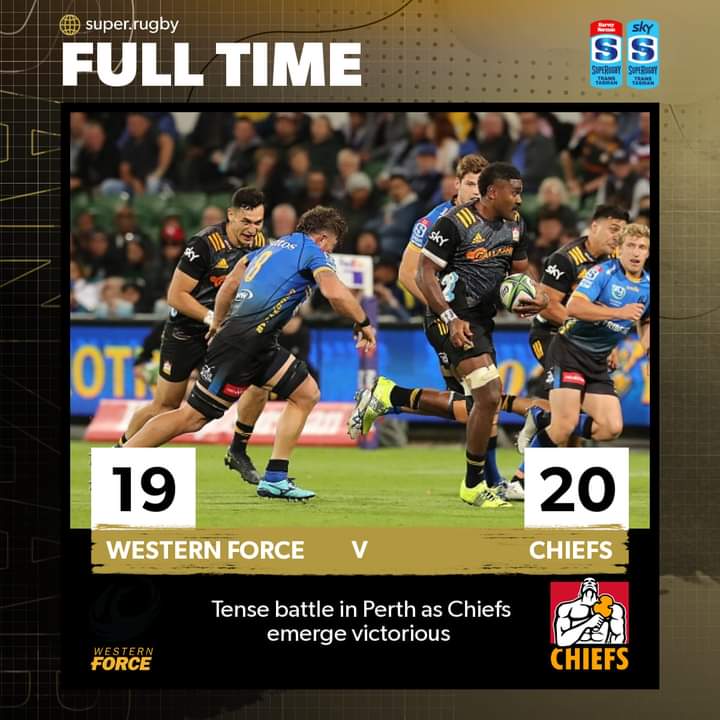