The Chiefs made it three from three as they cruised to a comfortable 43-17 win over the Sunwolves in Tokyo on Saturday.

It seemed like it would all be so different at the start, though, as the Sunwolves made a strong start to the match with Garth April going over in the corner just six minutes in. A try which he converted himself.

Perhaps it was just the jetlag but conceding an early try was just what the visitors needed to snap them out of their early lethargy and responded with a five-pointer of their own just four minutes later as Solomon Alaimalo outpaced the defence and galloped down the line to score.

They would go on to score another three tries in around 25 minutes to completely take the game away from their Japanese hosts.

Shaun Stevenson gave the Chiefs the lead for the first time in the match in the 15th minute as James Dargaville made a bad call in deciding against a clearance kick, instead going for contact inside his own 22. The ball was turned over and spread wide to Stevenson for an easy score. Damian McKenzie was successful with the conversion this time.

Brad Weber was next over the line for the Chiefs in the 24th minute as he just straight bulldozed his way through Naoto Saito after receiving the ball from a lineout to make it 7-17 to the visitors.

McKenzie made up for his wayward kicking with a try of his own in the 34th minute, going on a mazy solo run past three defenders before offloading to Alaimalo. However, acknowledging the fullbacks work, Alaimalo gave it back to him once over the try line to allow him to score. He also converted his own try to make it 7-24.

The Chiefs were hit with a yellow card on the stroke of half time as Tyler Ardron was sent to the bin for a series of quick penalties against the visitors. The home side took advantage immediately, kicking for the corner and rolling over the Chiefs with the maul, putting Jaba Bregvadze over the line and giving them some hope going into the second period with the score at 12-24.

Unfortunately for the home fans, that hope was soon dashed as it took the visitors just three minutes of the second half to cross the whitewash once again. It came in heartbreaking fashion too, as they looked odds on to score themselves before captain Keisuke Moriya spilled the ball and it was scooped up by Lachlan Boshier, who ran the length of the field to score. McKenzie added the extras.

To be fair to the Sunwolves, they fought back and put in a big shift trying to rectify the gulf in the scores between the two sides but were held out by some epic defending from the visiting side.

They eventually managed to pull one back in the 74th minute with a stunning attacking move they went from left to right and back again with some sublime passing to eventually send Shogo Nakano over the line. April failed to add the conversion and the score was 17-31.

The Chiefs responded once again, though, scoring two more tries in the dying moments of the game to put the result completely beyond doubt.

Quinn Tupaea found a bit of space to dart through the defence in the 78th minute before Kaleb Trask added the cherry on the cake seconds before the fulltime whistle. McKenzie converted the first but missed the second as the Chiefs ran out comfortable 17-43 winners. 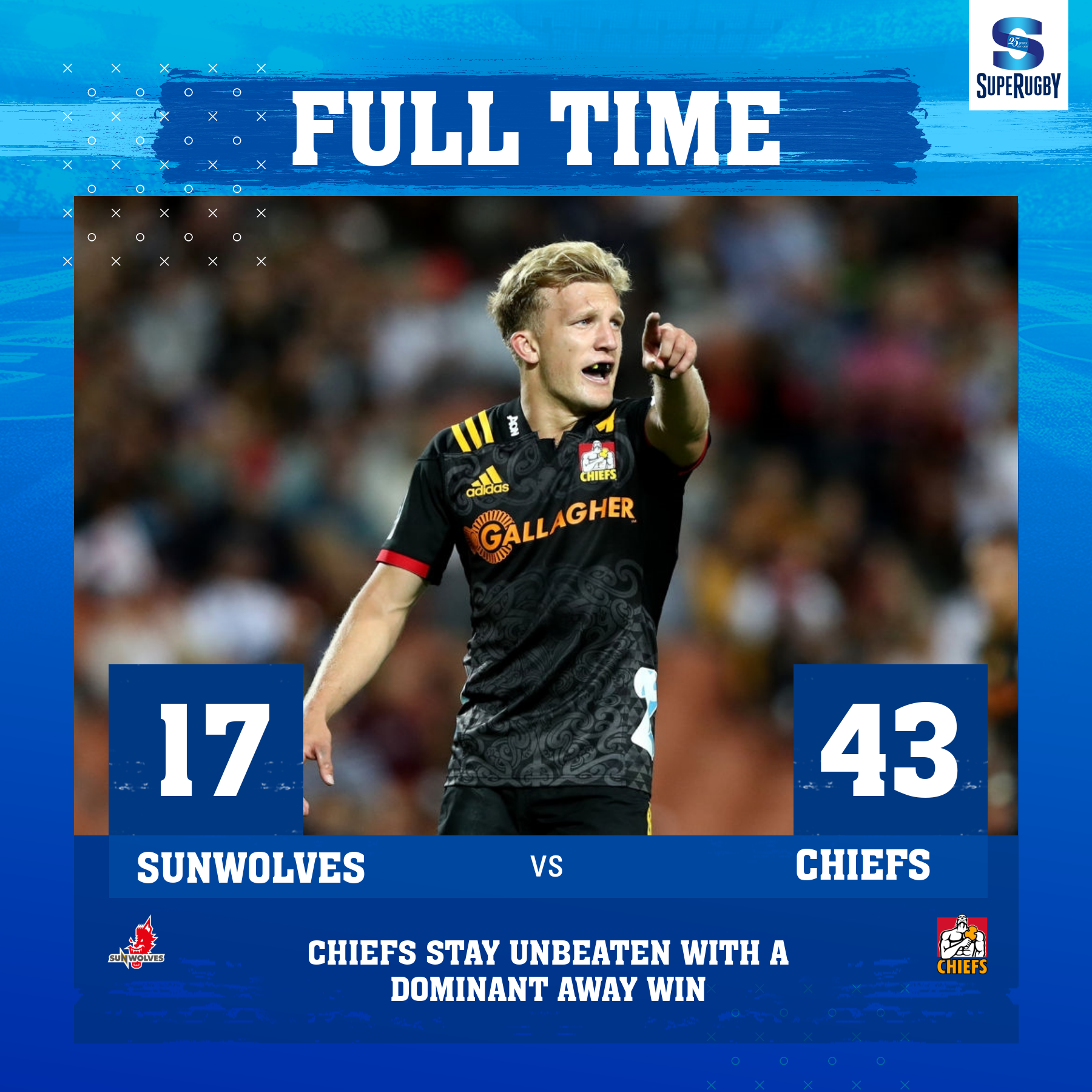