The Chiefs are on the verge of qualifying for this year’s Super Rugby quarter-finals after notching up an impressive 59-8 victory over the Rebels in Melbourne.

Unfortunately for the Rebels, their challenge came to an end as they fell short of the victory or draw they needed to book their spot in the tournament’s knockout rounds.

As the scoreline suggests, this was a decidedly one-sided affair, with the Chiefs controlling proceedings from start to finish, eventually running in nine tries to the Rebels’ one.

Shaun Stevenson led the way with a deserved hat-trick and their other five-pointers were scored by Sam Cane, Lachlan Boshier, Sean Wainui, Anton Lienert-Brown, Jack Debreczeni and Marty McKenzie. Debreczeni added six conversions and McKenzie also added a two-pointer off the kicking tee.

The Rebels’ only try was scored by Matt Philip, while Reece Hodge kicked a lone penalty.

The visitors showed their intentions from the kick off by giving the ball plenty of air and the approach paid off in the 13th minute when Cane rounded off an attack which started deep inside his own half.

The Rebels responded with Hodge’s penalty but midway through the half, the visitors extended their lead when Stevenson crossed for their second try after a charge down from a Quade Cooper kick close to the halfway line.

And just before the interval, Boshier crossed for their third converted try after Stevenson pounced on a loose pass from Hodge in the build-up – which gave the Chiefs a 21-3 lead at half-time.

It was more of the same after the break, as the Kiwi outfit picked up where they left off right from the restart to hold a 47-3 lead by the 57th minute thanks to further tries from Wainui, Lienert-Brown, Stevenson and Debreczeni.

Ten minutes later, Philip crossed for the Rebels' first try but it was too little too late as the Chiefs booked their play-off spot with further tries from McKenzie and Stevenson in the game’s closing stages to seal an emphatic victory that looks set to keep their season alive. 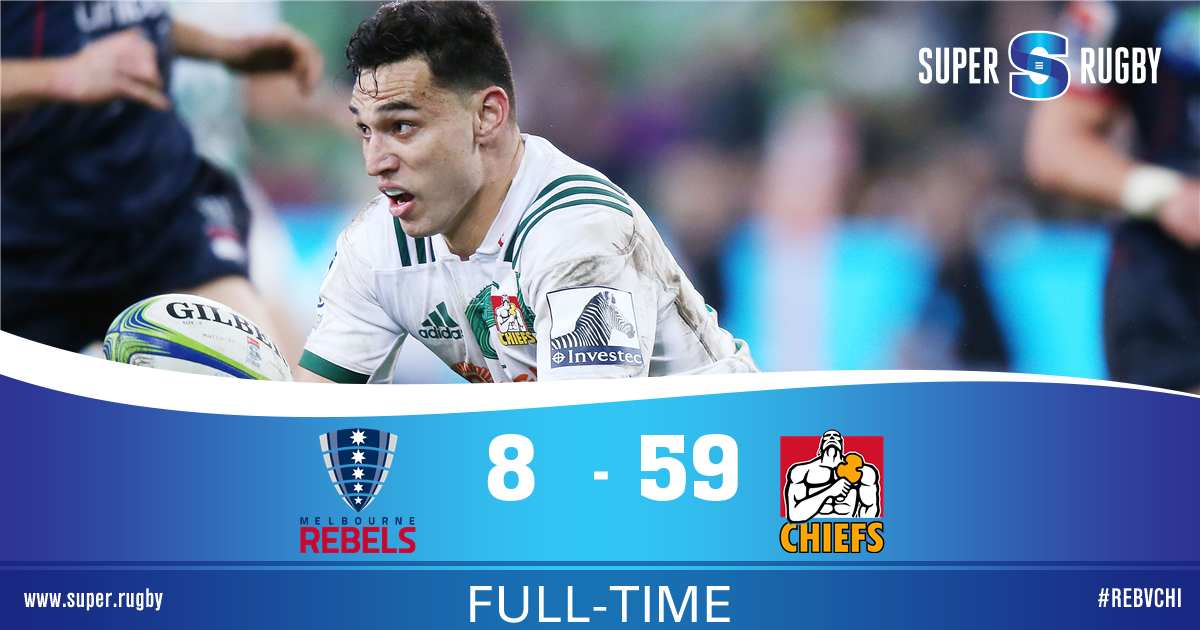