The Highlanders and Chiefs could not be separated in Dunedin on Saturday, with their Super Rugby derby finishing in a thrilling 31-31 draw.

The two teams deserve plenty of praise for making this the entertaining spectacle that it was, and the result was in the balance until the final whistle.

In the end, the Highlanders will be kicking themselves as they had most of the possession and territory but the Chiefs did not surrender and eventually outscored their hosts by five tries to four.

For the Highlanders, Josh Ioane contributed 16 points courtesy of a try, a penalty and four conversions and their other points came via tries from Ben Smith, Matt Faddes and James Lentjes.

The opening half started with a bang with plenty of end-to-end action and the home side drew first blood in the sixth minute when Ioane glided through a gap in the Chiefs’ defence before diving over, but the visitors struck back shortly afterwards when Brad Weber crossed the whitewash after a 30-metre run.

The next 10 minutes were an arm wrestle but the Highlanders held a slight edge and midway through the half they extended their lead when Ben Smith crossed for their second try from close quarters, but five minutes before half-time Jacobson showed great determination to shrug off the attentions of three defenders before scoring his side’s second try.

McKenzie failed with the conversion attempt which meant the Highlanders held a slender 14-12 lead at half-time, but the home side dominated the early part of the second half and were up 28-12 by the 55th minute.

This after Matt Faddes and James Lentjes crossed for tries. but the Chiefs did not surrender and kept their hopes alive when Angus Ta’avao crossed for their third try on the hour-mark.

The Chiefs continued to attack in the final quarter and were rewarded when Ardron rounded off a brilliant move in the 69th minute, with McKenzie’s conversion narrowing the gap to four points, before Ioane made the score 31-24 to the Highlanders when he added a penalty two minutes before the end.

But the visitors simple wouldn't quit and continued to attack and that tactic reaped great rewards when Ta’avao crossed for his second try shortly before the end as McKenzie added the extras which secured the draw for his side. 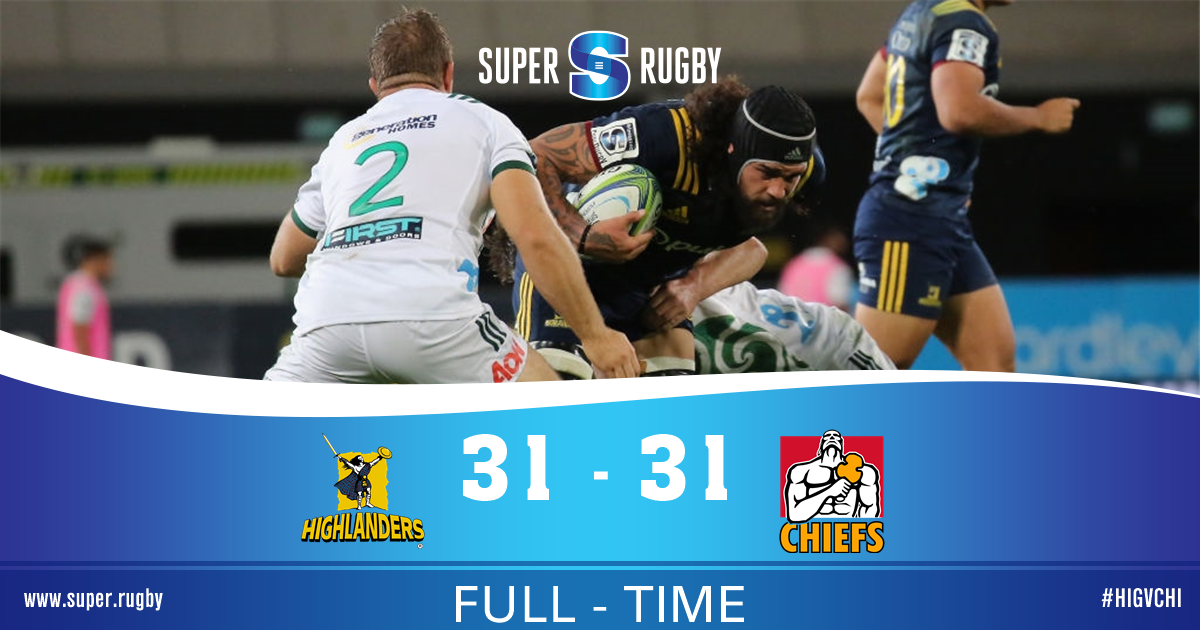