The Chiefs continued with their fine recent form when they claimed a hard-fought 41-28 victory over the Bulls in Hamilton on Friday.

In a highly entertaining game, in which both sides employed expansive game-plans, the Bulls will be kicking themselves as they held the upper-hand for large periods but a superb second half fightback from the Chiefs proved too strong for the visitors in the end.

The home side were full value for their win as they outscored the Bulls six tries to four with Brodie Retallick leading the way with a deserved brace.

The Chiefs showed their intent from the outset by running the ball from all areas of the field but the Bulls made the early breakthrough when Warrick Gelant crossed for the opening try in the fourth minute.

This, after Travis Ismaiel made a superb line break gathering an inside pass from Burger Odendaal which opened up the home side's defence. Ismaiel was soon inside the Chiefs' 22 and did well to offload to Gelant, who crossed for a deserved try.

Five minutes later, the Chiefs were level after the Bulls failed to deal with a teasing grubber kick from Tiaan Falcon inside their 22. Ismaiel initially gathered the ball but lost possession in contact and from the turnover, the ball was shifted to Johnny Fa’auli who dotted down.

That did not deter the visitors and in the 16th minute, they struck out wide when Divan Rossouw did well to slip out of a tackle from Sean Wainui before diving over in the corner.

Midway through the half, the Bulls launched another attack when Jesse Kriel glided through a gap in the Chiefs' defensive line before offloading to Rossouw, who crossed for his second try.

The Chiefs were under the cosh but they did not panic and in the 36th minute Retallick showed his class when he barged over from close quarters.

Despite that try, the Bulls continued to attack and that approach paid dividends in the 38th minute when Embrose Papier gathered a kick just inside the Chiefs' half before setting off on a great run.

He offloaded to Kriel who did well to throw an inside pass to Pollard, who dived over under the posts and his conversion kick meant the Bulls had their tails up with the score 28-14 in their favour at half-time.

The Chiefs came out firing after the interval and in the 43rd minute Mitchell Brown narrowed the gap when he crossed for their third try after the ball went through several phases in the build-up.

And on the hour-mark Retallick found himself in the clear close to the touchline, midway between the halfway mark and the Bulls' try-line.

The All Black lock still had work to do but after selling Pollard a brilliant dummy, he burst through a tackle from Jaco Visagie before crossing the whitewash with a defender on his back.

The Bulls thought they had extended their lead shortly afterwards when Gelant set off on a mazy run before offloading to Papier, who outpaced the cover defence before diving over under the posts, but the try was disallowed when Lood de Jager was penalised for obstruction in the build-up.

That proved costly as a Damian McKenzie soon gave the Chiefs a 29-28 lead, when he slotted a penalty in the 66th minute and two minutes later things went pear-shaped for the Bulls when Conraad van Vuuren was sent to the sin-bin for a dangerous tackle on McKenzie.

The Chiefs made their numerical advantage count when Solomon Alaimalo scored after gathering a well timed chip kick from Fa'auli and shortly before full-time, Anton Lienert-Brown pounced on a handling error from the Bulls – close to their try-line – when he went over for his side's sixth try. 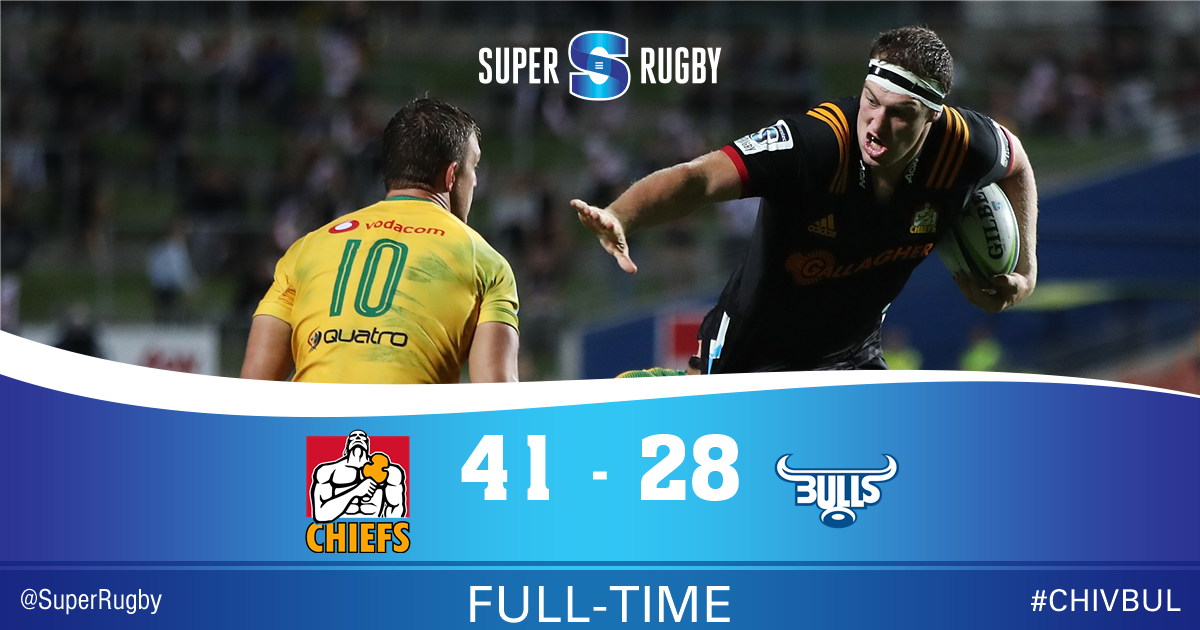