The Chiefs ended their tour on a high with a hard-fought 16-7 victory over the Western Force in Perth on Saturday.

The result means the Chiefs have only lost one of their eight games in this year's competition, an impressive record for the Waikato side.

The Force played their heart out but couldn't make it three from three at home as the Chiefs made it nine wins out of 11 against the Perth-based side.

The result also means that Aussie sides have not beaten a New Zealand side in thirteen consecutive games.

The Chiefs started off in typical fashion, attacking from the onset. Aaron Cruden made a classy break after receiving from a poor Dane Haylett-Petty kick before switching the ball to the left where it finally ended up in Liam Messam's hands, who had the easy task of dotting down in the 7th minute. Cruden added the extras to give the away side an early 7-0 lead.

Handling errors from the Chiefs prevented them from extending their lead despite dominating territory and possession. Depsite being in try-scoring, they had already made four handling errors in the opening twenty minutes.

The Force's star full-back Haylett-Petty pulled his hamstring and was substituted for Alex Newsome in the 21st minute. Both sides went through a poor phase of making handling errors and this affected the flow of the game.

The Force defence showed their resilience in the face of some probing Chiefs attacks who continued to dominate territory and possession. One of the Force's tactics was to relieve the pressure through tactical kicking, which was always not accurate and sometimes allowed the Chiefs to launch counter-attack after counter-attack. But the Force continued to hold their own.

In fact, they got a try of their own after Dominic Bird was penalised for hands in the ruck. The home side went opted for touch from the penalty. The lineout was expertly plucked out of the air by Lewis Carmichael before they timed their rolling maul to perfection as flanker Matt Hodgson went over with ease. Ian Prior added the extras to equal the score at 7-7.

The Force were lucky to go into the break at 7-7 after Chiefs prop Siegfried Fisi’ihoi somehow contrived to knock the ball on when attempting to dot down after some persistent pressure from the away side.

Force number eight was penalised for going off his feet at the ruck and Cruden kicked the resulting penalty between the posts to give the Chiefs an early 10-7 lead.

The Chiefs continued to make too many unforced errors which hampered their game. Cruden extended the lead to 13-7 with his second penalty on 55 minutes.

The Chiefs, who have the highest percentage of lineouts won in the competition and are usually consistent in this regard were guilty of losing a number of their lineouts in this match.

Cruden kicked another penalty after Force substitute Francois Van Wyk was penalised to extend the Chiefs' lead to nine points and that's how it stayed until the end. 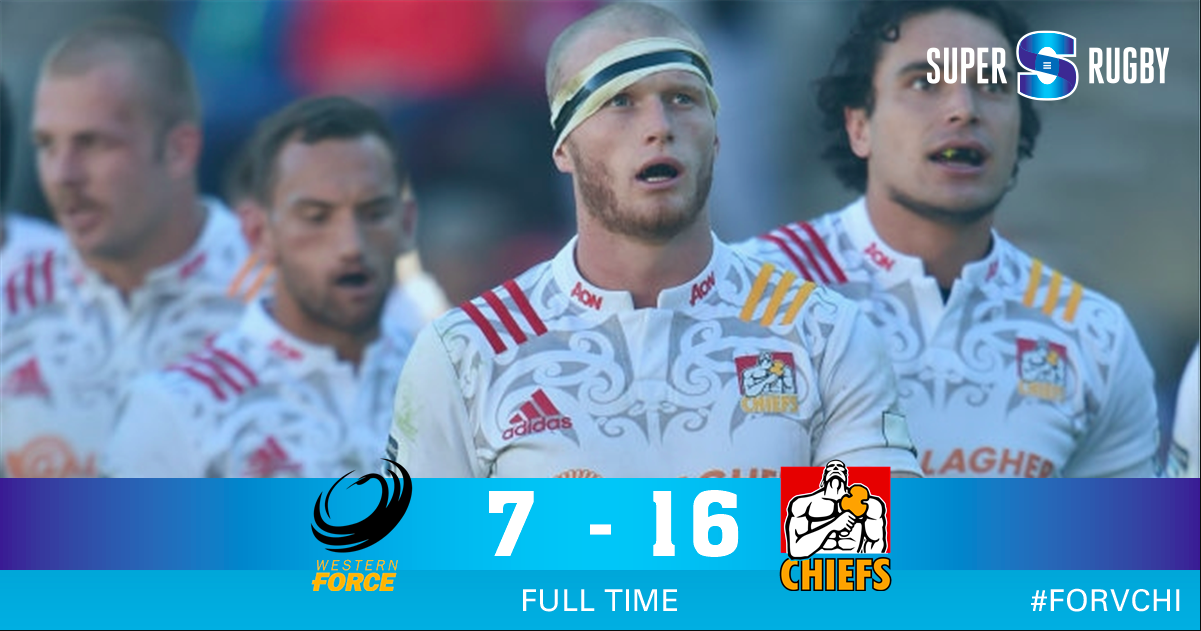