Chiefs too strong for Kings

Fullback Damian McKenzie scored 28 points as the Chiefs claimed an important bonus point victory over the Kings 24-58 in Port Elizabeth on Saturday.

A dominant display from the visitors saw them score three first-half tries and four in the second, with the win moving the Chiefs move to the top of the New Zealand conference and second on the overall table standings. The Kings meanwhile remain without a win.

The home side showed rare moments of brilliance with hooker Edgar Marutlulle scoring the only tries for the Port Elizabeth side – coming from excellent synergy between the forwards which saw the former Lions player get onto the scoring sheet – and their lineout and scrums stood up to the challenge. But that was as far as it went.

McKenzie's form from the tee had allowed the Chiefs to open up a gap and keep the Kings out of reach,  the full-back kicking a perfect nine out of nine attempts.

Co-captain Sam Cane was the pick of the forwards for the visitors as he not only scored twice but led his impressive side with so much ease.

A first-minute penalty was awarded to the home side after the Chiefs collapsed their maul, Louis Fouché opening his account and scoring the first points of the match.

It was only in the eleventh minute that the New Zealand side added their first points with a Mckenzie penalty tying the score. The fullback however went from hero to villian moments later, after taking the ball into touch thinking that it was kicked out directly. It was from this position that the Kings were awarded their second penalty inside the Chiefs' half, Fouché converting from right in front and making the score 6-3.

The Chiefs had to wait until the 20th minute for their first try, a driving maul from about ten metres from the Kings' try line resulted in co-captain Cane crossing over the whitewash.

Lock Michael Allardice then knocked the ball on metres from their try line resulting in a penalty at scrum time, with Fouché converting his third penalty.

A late tackle offence from James Lowe on Luzuko Vulindlu pointed out by the assistant referee moments later allowed Fouché to regain the lead for the Kings but a positive passage of attacking play from the Chiefs saw them force the home side to concede a penalty, with Mckenzie making no mistake with his penalty attempt to make the score 12-13.

Glen Fisiiahi snatched up the ball after Stefan Watermeyer's error for a sprint to the try-line but it was Malcolm Jaer who stopped him metres out. A quick recycle and Mckenzie went crashing over, converting his own try to extend the Chiefs' lead to 12-20.

Fouché was put under pressure by Lowe after the fly-half caught an up and under, a turnover at the ruck handed possession back to the Chiefs. A penalty moments later was taken quickly by Cruden and Taleni Seu powers over for yet another try, McKenzie adding the extras to make it 12-27.

Marutlulle then went over for the Kings first try of the match after the home side once again dominated at the lineout with a powering driving maul, Fouché missing the conversion as the Chiefs led 17-27 at half-time.

The Chiefs came out firing in the second half with Cruden setting up Charles Ngatai to score after Kings scrum-half Ntando Kebe kicked the ball directly into touch, handing the Chiefs the lineout possession from which they struck. This try also restored the visitors bonus point try, by outscoring the home side with the needed three tries according to the new system.

Jaco van Tonder was denied a score thanks to a try-saving tackle from Seta Tamanivalu, but a knock-on from the Chiefs near their own line saw Marutlulle inch over for his second try.

After relentless attacking phases from the New Zealanders the Kings could not hold out any longer and Cane went over for his second of the match, McKenzie extending the score to 24-48.

Pressure from the Chiefs on replacement scrum-half Kevin Luiters forced him to ground the ball in the in-goal area and handed a five-metre scrum to the visitors, before Martin Bezuidenhout was sent to the sin bin for a professional foul.

With the last ten minutes of the match approaching Fisiiahi went over for the Chiefs' seventh try and McKenzie took his personal tally to 28 with the conversion and a late penalty for a huge win. 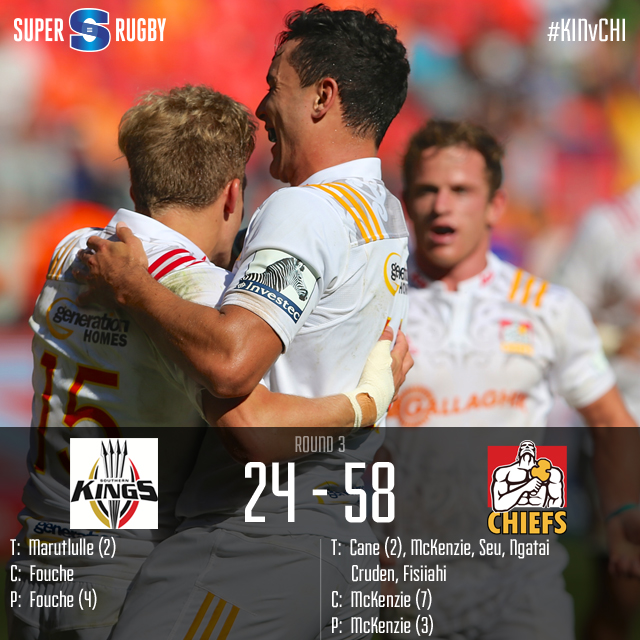