Chiefs Too Strong for Spirited Blues

The Chiefs secured their fourth successive Super Rugby victory when they beat the Blues 21-19 in a hard-fought derby in Hamilton on Saturday.

The result means the Chiefs are undefeated in their last 14 games against the Blues which is the longest unbeaten streak of any team against another in the tournament's history.

The win also means the Chiefs provisionally move into second position on the New Zealand Conference standings while the Blues, who deserve plenty of credit for a spirited performance, are still languishing at the bottom of the table.

The Blues had the better of the early exchanges and held a 6-0 lead inside the first five minutes thanks to two well-taken penalties from Stephen Perofeta. The Chiefs were soon camped inside their opponents' 22 and reduced the deficit courtesy of a penalty of their own from Damian McKenzie in the ninth minute.

The home side continued to dominate and three minutes later Solomon Alaimalo made a telling break before he was tackled on the edge of the Blues' 22 by TJ Faiane. But despite being brought to ground, Alaimalo managed to get a pass out to McKenzie and he did well to offload to Sean Wainui, who crossed for the opening try.

Midway through the half McKenzie extended his side's lead when he landed another three-pointer off the kicking tee before Perofeta replied with a penalty in the 29th minute which meant the Chiefs led 11-9.

On the half hour-mark, McKenzie added his third penalty but shortly afterwards, he was forced off the field with a hip injury with his older brother Marty coming on as his replacement.

The younger McKenzie's exit was a setback to the home side and the Blues were soon camped inside their opponents' half. And after taking the ball through some phases in the Chiefs' 22, James Parsons barged over from close quarters for the men from Auckland's first try.

Perofeta added the extras and on the stroke of half-time he succeeded with his fourth penalty which meant the Blues led 19-14 at the interval.

The teams continued to attack during the second half but superb defence and numerous unforced errors from both teams meant that neither side managed to add to their points tally during the first quarter of the half.

The Chiefs came close to scoring on a couple of occasions during that period but poor decision making cost them dearly. In the 56th minute, they launched a drive from a lineout on the Blues' five-metre line but nothing came from that attack as Lachlan Boshier was blown up for obstruction.

And two minutes later, Anton Lienert-Brown tore the Blues defence to shreds with a brilliant line break before throwing a pass to Toni Pulu, who knocked on with the tryline beckoning.

The Chiefs continued to pile on the pressure and in the 68th minute the Blues suffered a setback when Josh Goodhue was sent to the sin bin for a cynical defensive foul inside his 22.

With 14 men on the field, the Blues battled to contain their hosts and in the 74th minute referee Paul Williams awarded a penalty try to the Chiefs when a scrum collapsed close to the visitors' try-line.

That seven-pointer proved to be the decisive score in this match and sealed another victory for the hosts over their rivals. 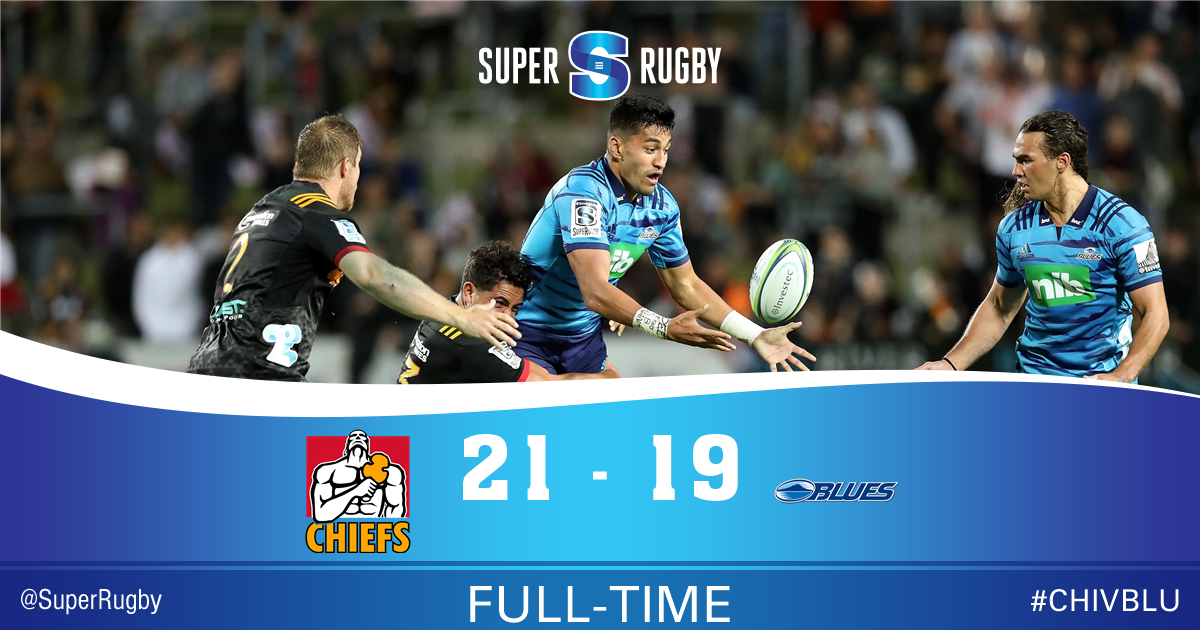