Chiefs versus Hurricanes Ends In A Gripping Draw

The New Zealand Super Rugby derby saw plenty big hits and some thrilling running rugby but the Chiefs and Hurricanes played to a 23-all draw on Friday.

Both sides scored a brace of tries apiece with Damian McKenzie in fine form for the Chiefs as he finished with an 18-point haul courtesy of a try, two conversions and three penalties, while Anton Lienert-Brown also scored a try.

For the Hurricanes, Beauden Barrett led the way with a 10-point contribution after kicking two penalties and two conversions. Their other points came via tries from Matt Proctor and Wes Goosen and Jordie Barrett also succeeded with a penalty.

The fixture was overshadowed by Friday’s mass shooting in Christchurch and a moment of silence was observed in exemplary fashion before kick-off as both teams paid their respects to the victims of the tragedy.

As expected, this was an entertaining affair between two sides at opposite ends of the spectrum in the competition and although the Chiefs came into this match low on confidence – after losing their first four matches – they gave a good account of themselves and were competitive throughout.

The home side took an early lead thanks to a try from Lienert-Brown, who did well to charge down a clearance kick from Chase Tiatia before snapping up the loose ball on his way over the try-line.

The Hurricanes replied via a penalty from Beauden Barrett but the visitors were soon in front when Barrett got a well-timed pass out to Proctor, who had an easy run-in over the whitewash.

Midway through the half, McKenzie left his stamp on the match when he gathered a pass from Brad Weber, just outside the Hurricanes’ 22, before outsprinting the cover defence on his way over the try-line.

Mckenzie added the extras before Jordie Barrett slotted a long range penalty but the Chiefs full-back added two further three-pointers off the kicking tee which gave his side a 20-13 lead at half-time.

The Hurricanes reduced the deficit shortly after the restart when Beauden Barrett added a penalty and they took the lead in the 51st minute when Tiatia beat a couple of defenders before offloading to Goosen, who dotted down.

Just before the hour-mark, McKenzie drew his side level when he added his third penalty and although both sides gave their all in a bid to secure the win, it was not to be as some unforced errors and solid defence saw the teams cancelling each other out during the final quarter. 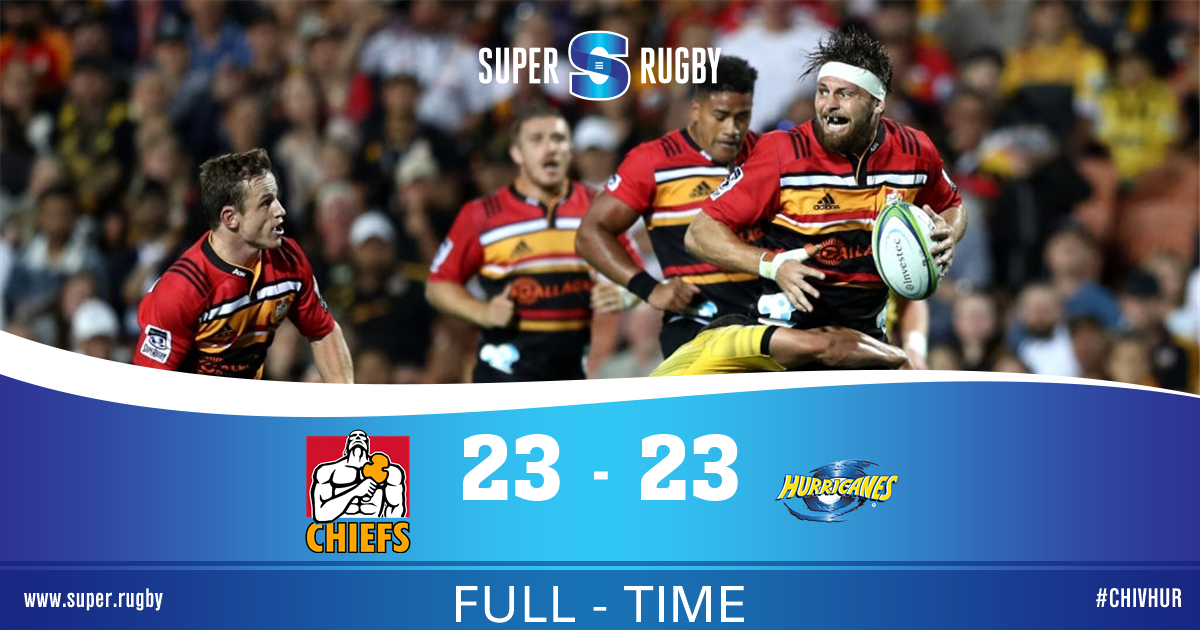