The Chiefs continued their climb up the Super Rugby standings as they overcame the Blues 33-29 in a thrilling derby in Hamilton on Saturday.

In a hard-fought encounter, played at a frenetic pace, the Chiefs outscored their visitors by five tries to four but the Blues deserve plenty of credit as they continued to fight until the end.

Lachlan Boshier scored a brace of tries for the hosts and Brad Weber, Ataata Moeakiola and Jesse Parete also crossed the whitewash. Their other points came via kicks from Damian and Marty McKenzie, who added two conversions apiece.

For the Blues, Ma'a Nonu capped a fine display by scoring two tries while Melani Nanai and Rieko Ioane also dotted down.

Otere Black slotted two conversions and a penalty and Harry Plummer slotted a conversion as well.

The home side opened the scoring in the 10th minute when Weber intercepted a loose pass from James Parsons just inside the Chiefs’ half before racing away to cross for a deserved try.

Momentum between the sides ebbed and flowed before the Chiefs extended their lead via a five-pointer from Boshier from close quarters after a brilliant run from Damian McKenzie in the build up.

The Blues were under the cosh for long periods over the next 15 minutes but despite several forays into their half, the Chiefs could not extend their lead.

And just before half-time, the Blues were rewarded with a spectacular try from Melani Nanai after the visitors launched an attack from inside their 22.

That meant the Chiefs led 14-10 at half-time but they were fastest out of the blocks in the second half and four minutes after the restart Moeakiola ran onto a pass from Anton Lienert-Brown before dotting down.

Midway through the half, the Blues struck back - Nonu showing his class by powering his way over the try-line despite the attentions of three defenders but the Chiefs replied in the 64th minute via Boshier’s second try.

The visitors needed a response and that came via Ioane’s try after TJ Faiane laid the groundwork with a brilliant run in the build-up, but Parete’s try in the 72nd minute gave the Chiefs more breathing space.

The Blues would not surrender and three minutes before the end Nonu crossed for his second try and although it helped his side earn a second bonus point, it was not enough to secure the result. 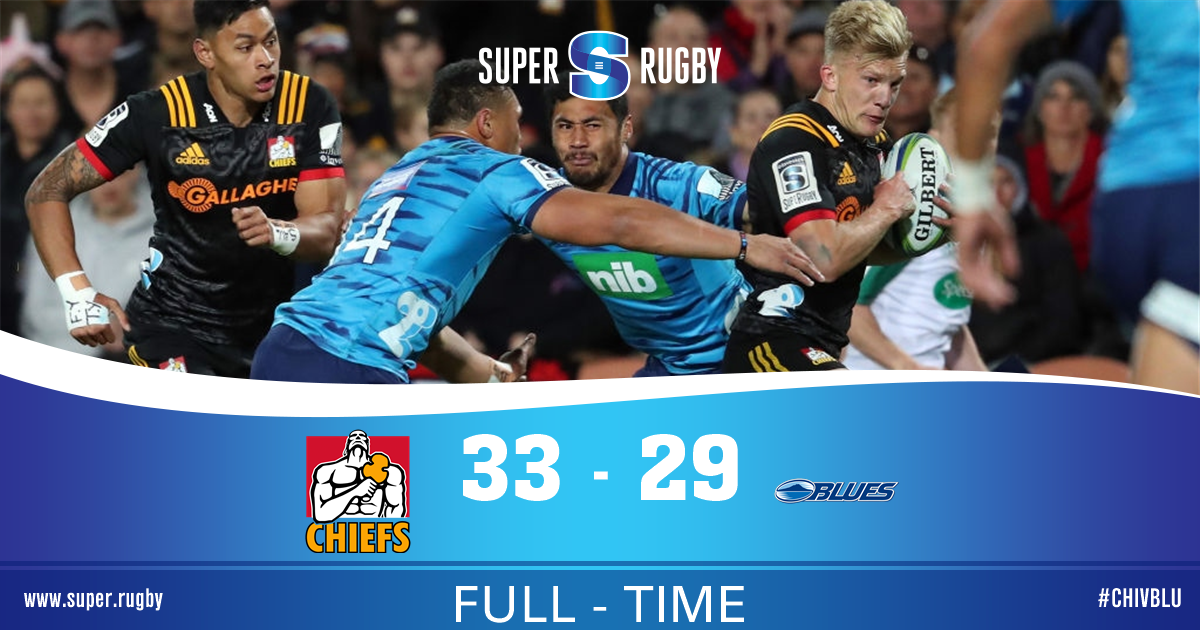