The Crusaders produced a classy second-half performance to book their spot in the Super Rugby semi-finals with a 38-14 victory over the Highlanders in Christchurch.

As expected, this was a fast-paced and entertaining encounter with both sides giving the ball plenty of air. The Crusaders’ forwards deserve plenty of credit, however, as they held the upper-hand in the tight exchanges, especially the scrums which they dominated throughout.

Richie Mo’unga was in superb form for the home side as he contributed 23 points courtesy of two tries, five conversions and a penalty. The Crusaders’ other points came via five-pointers from David Havili, Whetu Douglas and Michael Alaalatoa.

For the Highlanders, Patelesio Tomkinson and Teihorangi Walden crossed the whitewash while Josh Ioane succeeded with two conversions.

The Crusaders made the brighter start and took the lead in the third minute courtesy of a Richie Mo’unga penalty. The visitors held a slight edge during the next 10 minutes, however, but had nothing to show for their efforts after Jackson Hemopo had a try disallowed, for a double movement while crossing the try-line, and a penalty attempt from Ioane struck an upright.

Despite those setbacks, the Highlanders continued to attack and that tactic paid off in the 17th minute when Tomkinson crossed for the opening try after Rob Thompson flummoxed the Crusaders defence with brilliant footwork in the build-up.

Ioane added the extras which gave his side a 7-3 lead but the Crusaders regained the initiative five minutes later when Havili scored under the posts after a well-timed pass from Mo’unga deep inside Highlanders territory.

Mo’unga’s conversion gave the home side a 10-7 lead and he put more daylight between his team and the visitors when he crossed for their second try after great work from his outside backs in the build-up.

The Highlanders finished the half stronger, however, and shortly before half-time Walden gathered a flat pass from Aaron Smith deep inside Crusaders territory before slipping out of a Jack Goodhue tackle on his way over the try-line.

Ioane’s conversion meant the Crusaders held a slender 17-14 lead at the interval but the champions upped the ante on attack in the second half and scored 21 unanswered points during that period.

Five minutes after the restart, Liam Squire was yellow carded for an illegal hit on Douglas and the Crusaders soon took control of proceedings.

Three minutes after Squire’s exit, Douglas dotted down off the back of a lineout drive and the champions went further ahead in the 55th minute when Michael Alaalatoa barged over from close quarters.

That try knocked the wind out the Highlanders sails but the Crusaders continued to attack and they sealed their win in the 70th minute when Mo’unga crossed for his second and his side’s fifth try. 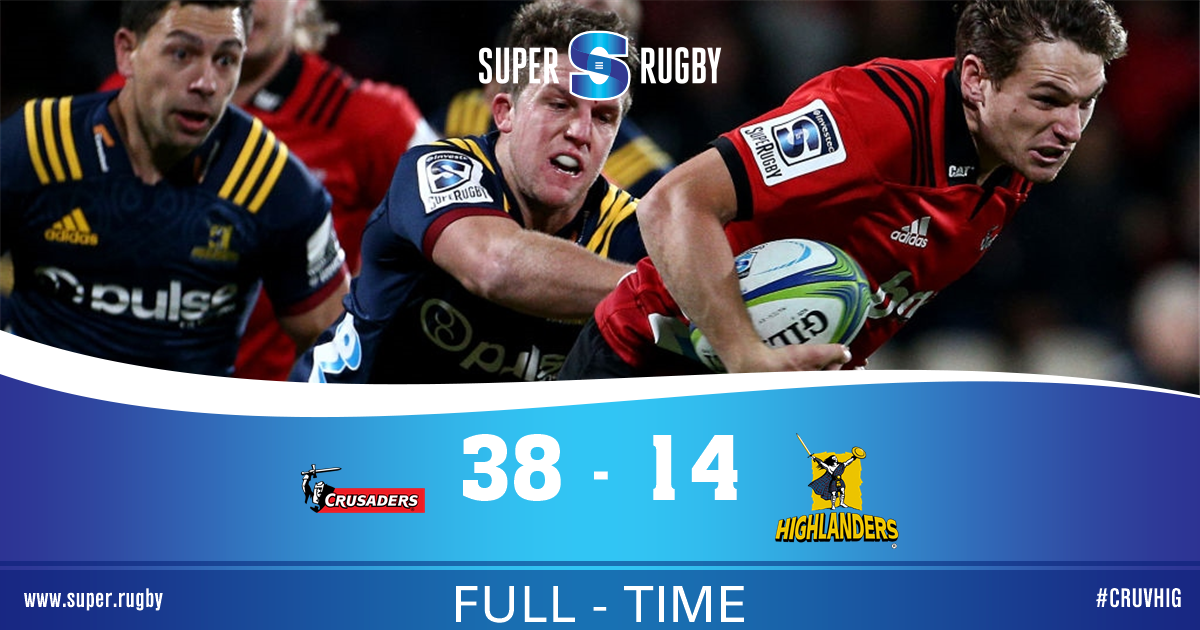