The Crusaders made a winning return to Super Rugby action when they claimed a deserved 45-22 victory over the Highlanders in Christchurch.

In a fast-paced and entertaining game, the champions were full value for their win as they outscored the Highlanders by five tries to three with Richie Mo’unga leading the way with a 25-point haul courtesy of a try, four conversions and four penalties.

The result was sweet revenge for the hosts, who were beaten by the Highlanders in their corresponding fixture in Dunedin in Round Five.

The home side dominated from the outset and took an early lead when – after taking the ball through 18 phases – Bryn Hall threw a long pass to George Bridge, who crossed in the left hand corner for the opening try in the third minute.

The Crusaders continued to dominate and 10 minutes later they extended their lead when David Havili ran onto another well-timed skip pass from Hall before crossing for their second try after Ryan Crotty and Andrew Makalio were stopped close to the try-line in the build-up.

Mo’unga added the extras which gave his side a 12-0 lead and, although the Highlanders were under the cosh, they did not panic and struck back via a well-taken try from Tyler Lomax, who went over from close quarters in the 19th minute after gathering a pass from Luke Whitelock.

Two minutes later, the Crusaders extended their lead when Mo’unga slotted a penalty and he added another three-pointer off the kicking tee 10 minutes later which meant the home side led 18-7 by the half-hour mark.

The visitors needed a response and that came five minutes later when Lima Sopoaga set off on a run from close to his 10-metre line before trading passes with Ben Smith. Sopoaga found himself in space after regaining the ball from his captain and was soon close to the Crusaders’ 22 where he offloaded to Smith again and the All Blacks full-back did well to step out of a tackle before crossing for a deserved try.

Sopoaga’s conversion attempt was successful which meant the game was evenly poised but, on the stroke of half-time, the Crusaders launched an attack from close to the halfway line. After Mo’unga, Wyatt Crockett, Matt Todd and Makalio had traded passes, Makalio offloaded to Scott Barrett, who crossed for a deserved try. Mo’unga made no mistake from the kicking tee which meant the Crusaders led 25-17 at the interval.

The champions started the second half in a similar fashion to the first and three minutes after the restart Mo’unga collected a pass from Crotty before booting the ball upfield from close to the Highlanders’ 10-metre line. He still had work to do but did well to beat Ben Smith and Sopoaga in a foot race before regathering on his way over the tryline.

Three minutes later, the Highlanders struck back when Waisake Naholo glided through a gap midway between the Crusaders’ 22 and their 10-metre line and he did well to outpace the cover defence before crossing the whitewash.

Although both sides continued to attack during the next 15 minutes, neither side managed to score any points during that period before Mo’unga added his third penalty in the 63rd minute.

And five minutes later, he made a scything line break, which tore the Highlanders defence to shreds, before throwing a long pass inside the visitors’ 22 to Bridge, who had an easy run-in for his second try.

That gave the Crusaders a 42-22 lead and they sealed their win in the 74th minute when Mo’unga added his fourth penalty. 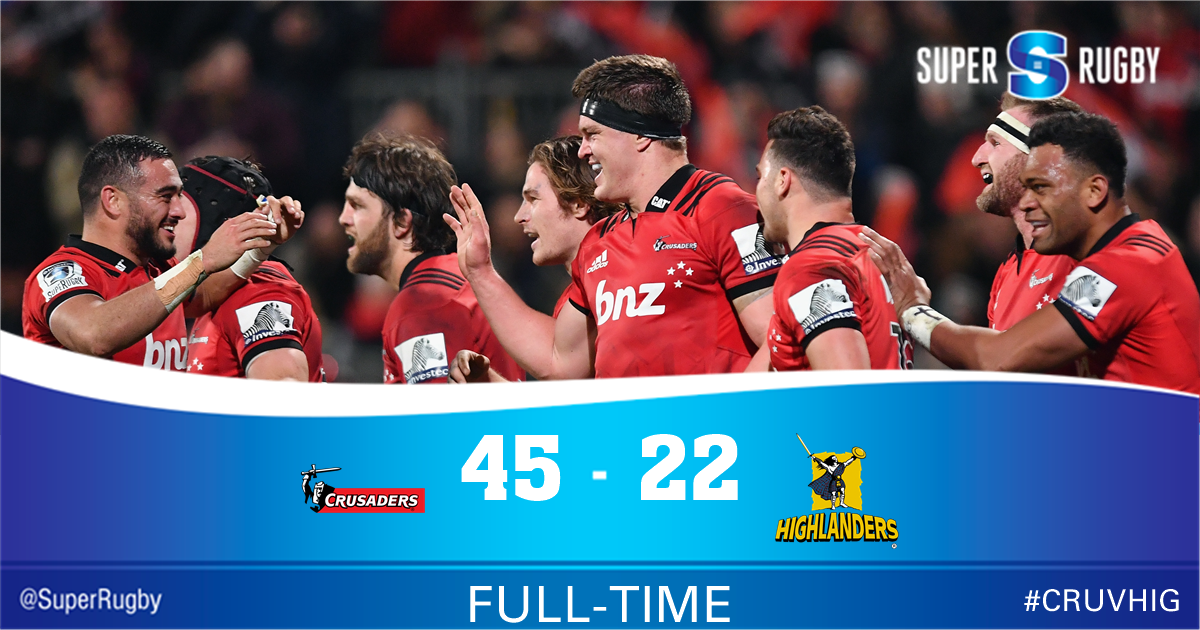